Countless talented New York chefs, downsized out of the limelight, have been forced to eke out an off-the-grid living in corporate kitchens, catering gigs and even suburbia. Take Cesar Ramirez, a former David Bouley understudy and the opening chef at Bar Blanc in the West Village.

This unlikely locale, annex to the Brooklyn Fare supermarket—where the chef spends his days preparing deli-case items—also serves one luxurious, daily-changing, 15-course+ meal to diners perched on stools around a stainless-steel prep table each night. It’s not quite the Brooklyn Per Se, but it certainly harbors that type of ambition.

There are no waiters, mood lighting, candles, music or coat check, and unless you bring your own wine (there’s no corkage fee either), you’ll only get water to drink. It’s not a restaurant, really—a dinner party’s more like it, served five nights a week in a chef’s atelier.

Prices are high: $394.36 a head. But think of it as theater, not dinner, and it may start to seem like more of a bargain. Until an expansion occurs later this summer—Ramirez is adding more stools and a second seating—this particular way-off-Broadway show is always sold out. The best you can hope for is a slot on the waiting list.

Eventually, you may get a call, as I did one afternoon after waiting two months. And so you show up—the performance starts promptly at 7pm—bottles in hand, prepared to eat, drink and make friends.

Word has been spreading through the community of affluent wine drinkers that Ramirez’s kitchen is the place to open those precious bottles you’ve been hoarding. And so the Manhattan lawyer arrives with an actress and her photographer boyfriend, toting six bottles from his favorite spot in Sonoma. The Aussie aristocrats pop open their Veuve Clicquot Grande Dame, before moving on to an auction-bought cabernet magnum from Napa.

The first tastes from the kitchen come out, shot glasses of cool cucumber and green-apple soup plucked from the walk-in fridge by Ramirez and his sous chef lieutenant, who are your hosts, cooks and waiters for the night. A convivial spirit ripples around the table. The actress asks everyone to share their astrological sign. Out comes the bluefin toro tartare, a decadent velvet bite with a dollop of mustard and soy. A single sultry Kumamoto oyster reclines on crme frache and yuzu gele. A collective sigh. More wine, more jewel-box nibbles: frog-leg and veal-brain beignets, lump crab wrapped in crispy kataifi, a mini sardine caught in a precious potato-chip cage. Eight or nine little fabulous bites and we’re still technically on the amuse part of the evening. Dinner, really, hasn’teven begun. Another shot glass ends the opening run, an astonishing layered dollhouse parfait: avocado mousse, cured salmon in mignonette cubes, maple foam, salmon roe, American caviar.

And now we’ve moved on to the first of six courses, listed like a haiku down a folded white page: Kampachi, medai, halibut, ravioli, cte de boeuf, mango. The setup feels more Tokyo than Brooklyn; a trip to Japan, says the chef, inspired these dinners.

The Japanese snapper with garlic chives and orange miso is a perfect miniature cube, flaky flesh under extra-crispy, scale-on skin—simple clean flavors, top-notch ingredients. A small fistful of halibut, gently cooked through, reclines in a miraculous broth—a Sino-French medley of dashi and shaved summer truffles. A single ethereal duck-filled raviolo comes topped with more of those truffles, microplaned into a confetti layer like Parmesan cheese. There’s steak to follow, a whispery sliver of rib eye, slow-cooked for hours but still plenty pink, atop a funky layer of ripe Langres cheese.

After dessert—an airy parfait layering mango mousse, coconut froth, candied cashews and rum-soaked brioche—the chef sticks around to hobnob with his guests, happily drinking the dregs of their wine. He toots his own horn, recalls an elderly diner who brought in an $18,000 bottle from her overstocked cellar, complains about other patrons not being properly reverential—if you’re not all about the food, he says, you’re not welcome back. Someone makes a joke about the Seinfeld Soup Nazi, and we begin thinking the chef would have been better off if he’d just stuck to cooking. There’s no doubt that Ramirez produces some astonishing food—some of the best small-plate cuisine in New York—in an unlikely and uncomfortable venue, but his lack of humility makes a poor digestif. 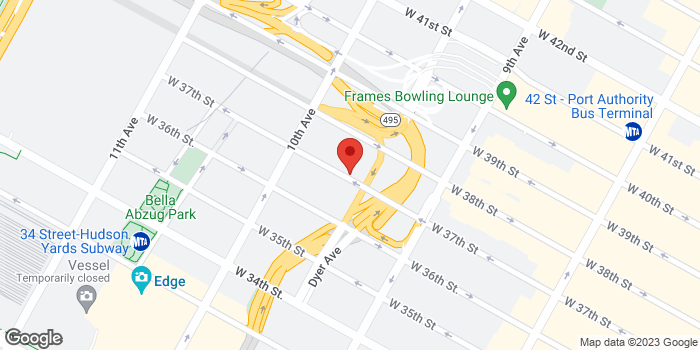