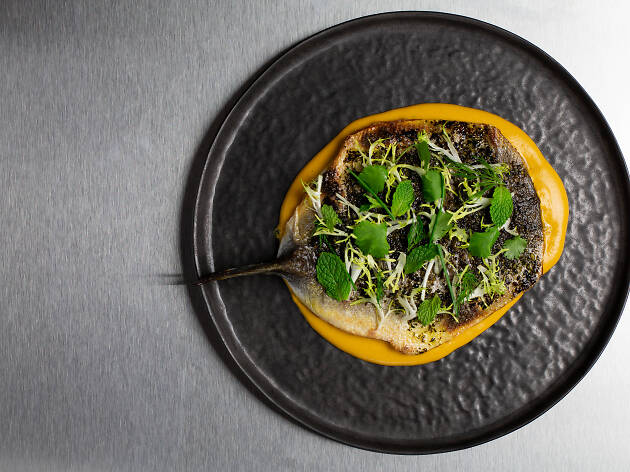 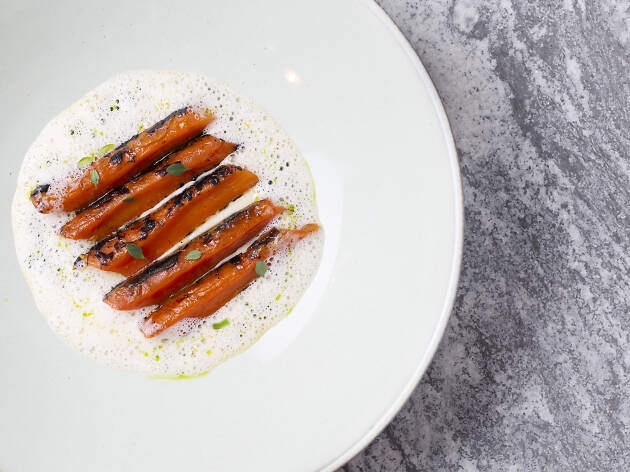 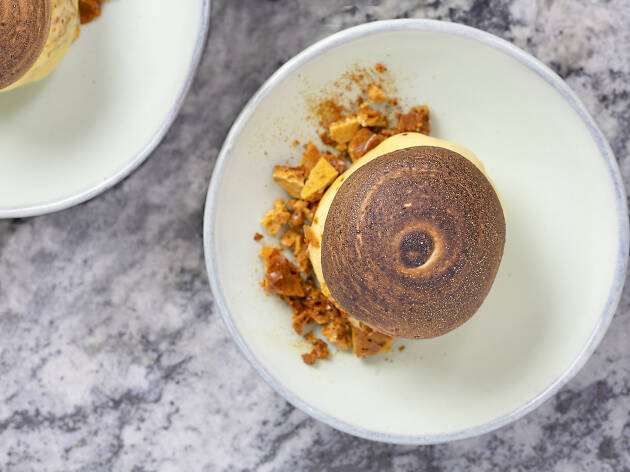 Nestled inside 70 Pine Street is a maître d' desk auspiciously stationed in the lobby of a highly sought-after Art Deco building. You might not know that hidden behind the stand is one of New York’s hottest new restaurants: Crown Shy.

I was happily surprised that at 6pm on a recent Friday, the space, located steps from Wall Street, was packed with a non-douchey crowd—not one conversation about ROIs was overheard. Crown Shy gives the illusion that it’s more chill than the address would infer: Servers wear white T-shirts and light-wash jeans with black high-top Converse, while Snoop Dogg’s “Drop It Like It’s Hot” hums through the speakers.

For a moment, you might forget it’s all orchestrated by New York fine-dining elite: Crown Shy is the first collaboration between James Kent, longtime Chef de Cuisine at Michelin-starred Eleven Madison Park and Executive Chef at NoMad, alongside Jeff Katz, Managing Partner of Del Posto.

First off, I love nothing more than a complimentary bread basket. Few restaurants offer it today, but Crown Shy’s pull-apart loaf with lemon zest and olive tapenade makes a strong case for a carb comeback.

We also feasted on gruyère fritters ($13) with chili and lime, essentially savory churros with a coating similar to the powdered cheese on junk food popcorn; an early signal that we were allowed to have fun in a fine-dining environment.

Still, it seemed odd that the fritters were more expensive than the much more elevated roasted sunchokes with cheddar and hazelnuts, the safest but most robust small plate ($12). This was followed by charred carrots atop a blanket of creamy razor clam foam, making the root vegetable look like it was sitting in a decadent first snow. The unorthodox use of horseradish with chicken-liver ragu ($18) was one of the best bites. I actually wanted more of the sharp, hot pepperiness in my sinuses to be turned up a few notches (years of Passover meals have primed me to handle much more horseradish).

For mains, we began with the buttery branzino, swimming in an orange pool of squash mole; a towel made of fines herbs helps dry off some of the richness ($29). The perfectly tender grilled pork chop ($35) was presented like a topographic map; carefully placed cubed Asian pears with mustard punctuate the landscape.

I’m not one to order just a scoop of ice cream after a meal, but something about pastry chef, Renata Ameni’s satsuma orange flavor told me to reconsider. The dessert, served with a hat of toasted marshmallow and crumbles of honeycomb, tasted like a creamsicle; a big enough scoop for sharing ($9). Residents of 70 Pine are quite spoiled with Crown Shy as their “neighborhood joint” that they don’t have to leave the premises to enjoy.