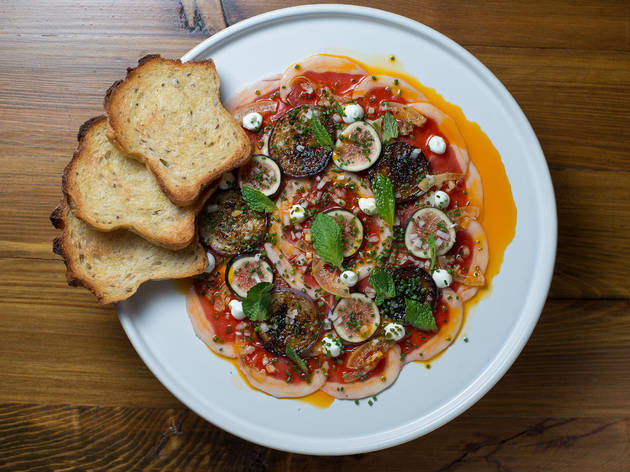 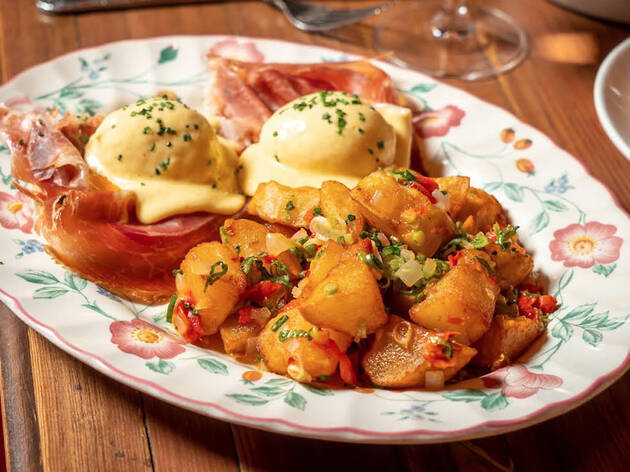 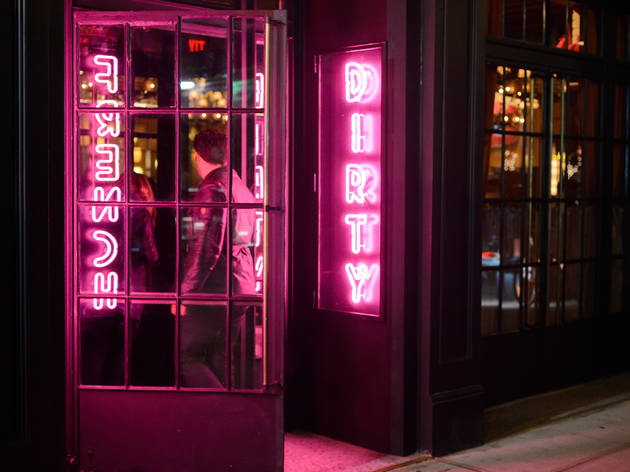 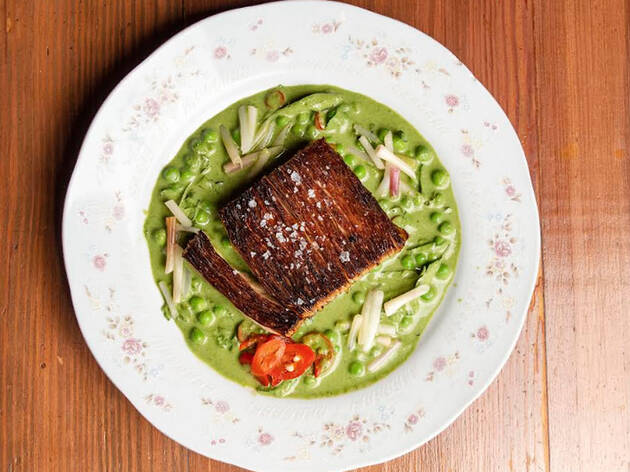 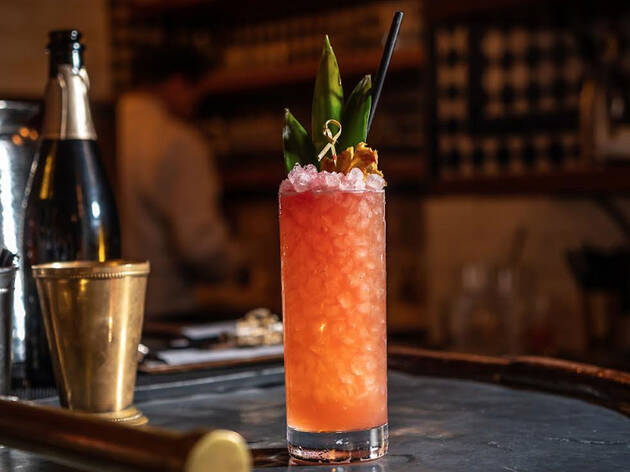 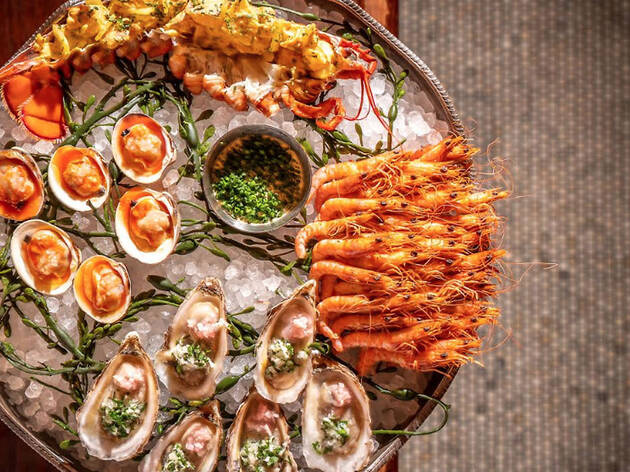 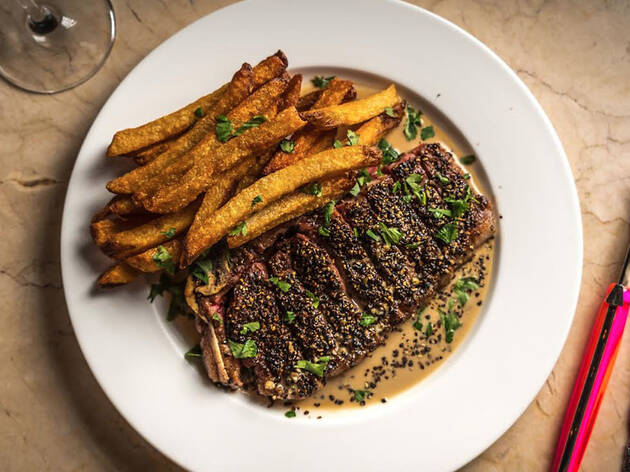 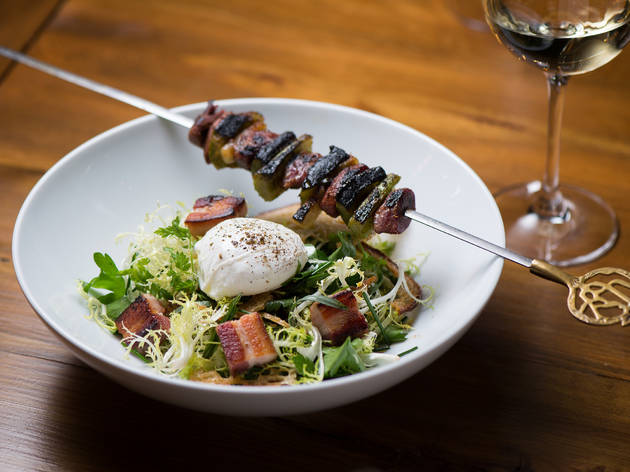 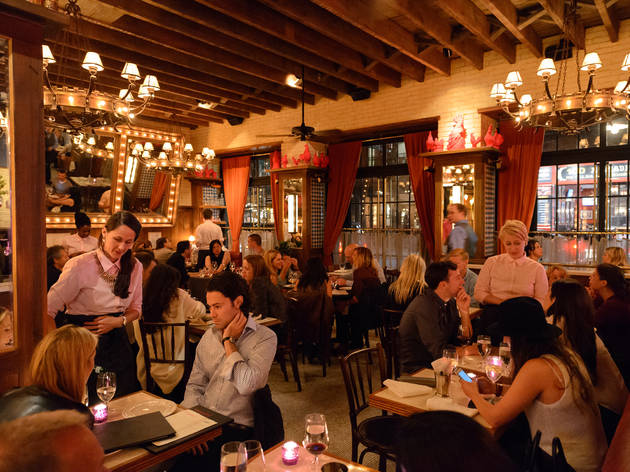 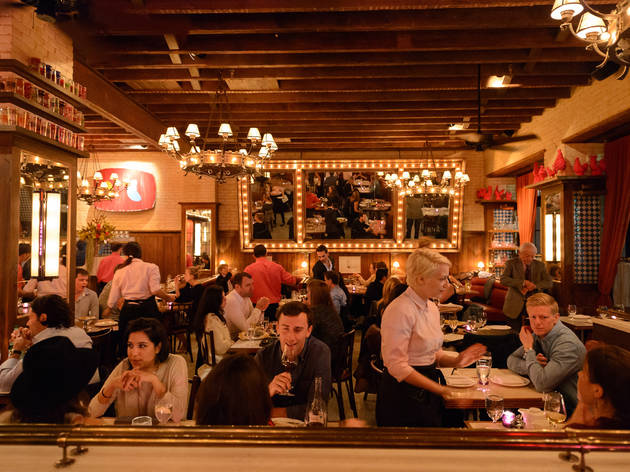 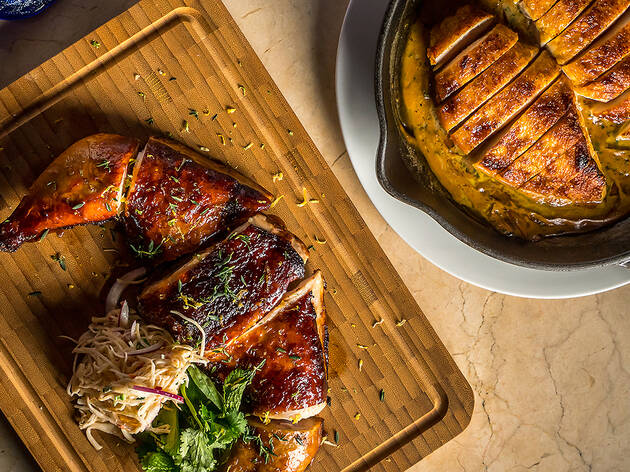 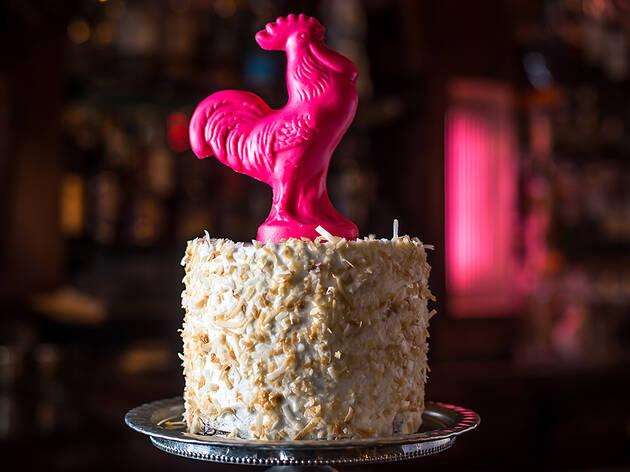 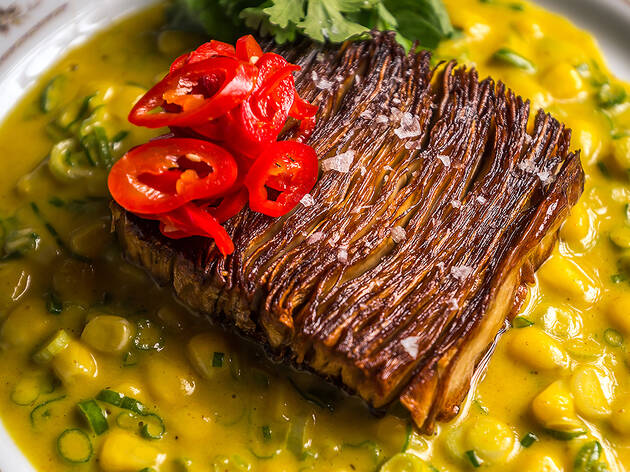 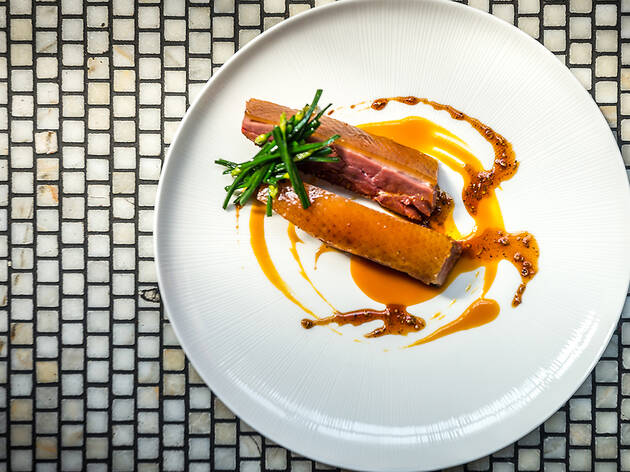 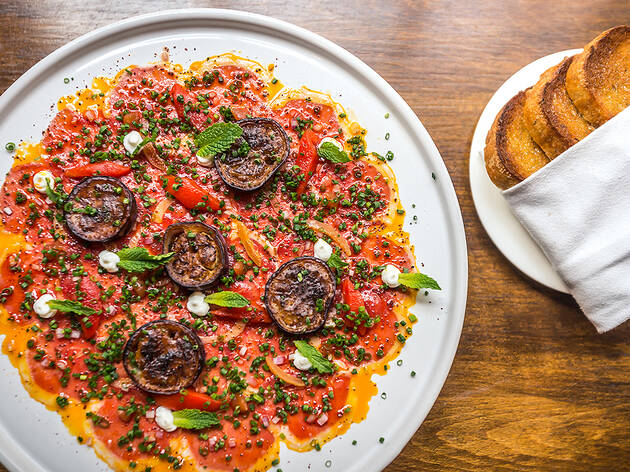 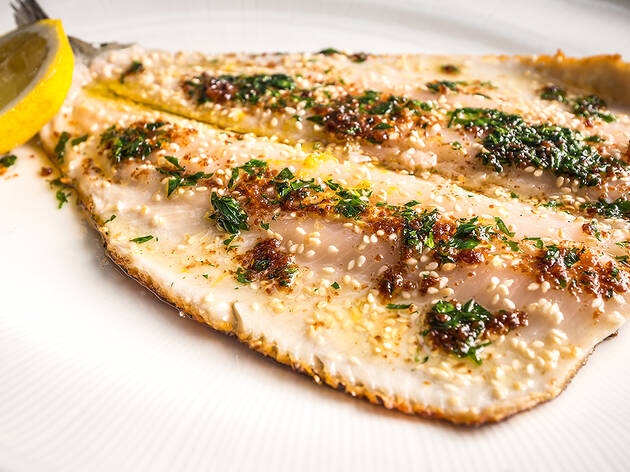 The team’s lofty ambitions have always been evident—the Mulberry Street deli serves a $100 prix-fixe menu, and a swell’s worth of ink has been spilled on Carbone’s $50 veal parmigiana—but they hit the apex with this showy Ludlow Hotel venture, the chain-smoking Parisian cousin to Carbone’s three-card-monte–dealing paesano. And though it shares an affinity for sticker shock and tableside fanfare, the team’s first non-Italian outfit is a different beast entirely.

The set piece here hits less on-point than at Carbone, where everything from the Sinatra tunes to the hard-voweled servers has been collected with a Tarantinian eye for detail. A vaguely ’80s thread weaves through French’s dining room: Hot pink powers the Dirty Dancing–esque neon sign bookending the entry, a popping hue that recurs on waiters’ button-downs and later on the engraved lucite handles of the restaurant’s Laguiole knives. Ivory busts, bleeding from the nose, peer from the vaulted ceilings like leftovers from an Annie Lennox video.

It’s a thematic shakiness atypical of such a plugged-in crew, but they find more stable footing in the cocksure menu, a mélange of bistro bona fides dabbed with North African color. A gratis starter of fluffy naan-like flatbread will prove to be a favorite even before dinner begins, brazenly buttery and herb-licked with a dollop of creamy fromage blanc.

A server lugs a silver tub spotlighting the oysters du jour, but skip the haughty slurps for velvety lamb carpaccio ($17) kissed with cumin, eggplant and fig. Frisée salad ($18), pierced with a skewer of sizzling giblets, is an effigy of the brasserie classic but pales when Carbone’s monumental Caesar salad creeps back into memory.

Then there’s the powerhouse côte de boeuf ($150 for 33oz) served in two stages, a distinctly over-the-top Torrisian feat of tender rib eye lush with béarnaise and a ground fat-cap brochette. You’ll only be able to eat a few bites, but those are nearly enough to make up for the lack of spark that Dirty French has in the grand scheme of the empire. For a second, you’ll almost forget about Carbone. Almost.

Dirty French says
Dirty French is a New York bistro created by Major Food Group’s Mario Carbone, Rich Torrisi and Jeff Zalaznick. The restaurant takes its culinary cues from the timeless dishes and preparations of the classic French bistro and enlivens them utilizing modern techniques and bold flavors. Dishes like Duck à l’Orange with ras el hanout and preserved oranges and Trout Amandine with sesame and apricots remain true to their French roots but are restyled with flavors that explore the breadth and depth of the global French culinary influence. Dirty French is located in the Ludlow Hotel in Manhattan’s storied Lower East Side.

Dirty French also operates The Lobby Bar, which is a cocktail bar and lounge located inside The Ludlow hotel. The Lobby Bar serves signature cocktails from Major Food Group's acclaimed Bar Director Thomas Waugh along with a select food menu. Please refer to the Menu page for more information. The Lobby Bar serves guests indoors and outdoors year-round in The Ludlow's garden courtyard, and is open from 12pm daily.

3 stars TO??? You can do better than that. Food is fantastic and at times out of this world! Did you try the duck? 5 stars for that alone. You got it right on the lamb carpaccio and flat bread. Add to its kind of (good) quirky well versed servers, great drinks and a humorous chic room and you have a great nyc restaurant and night out. Don’t judge too much on restaurants and dishes past and a color. You’re missing the brilliance of the food and new “theme”.

Dirty French is located inside The Ludlow Hotel.  Once you step inside either through their main entrance or the hotel entrance you will walk into a dining room with serious Paris charm.  The restaurant itself is on a very busy street so reservations are recommended. It’s a bit pricey but then again this is new York and sometimes you have to treat yourself.

The ambiance is lively and intimate at the same time. We went on a Friday evening with reservations and we sat at a lovely ostrich leather booth. The menu items are listed in French and translated in English. After stuffing our faces we unanimously agreed that everything was delicious, bold flavors, great presentation and the French influence was alive in every plate.

If you're looking to duplicate my dining experience. Here's what we ordered.

The beignets were the icing on the cake, I did not have to go all the way down to New Orleans to have great tsting beignets.  At the end of my meal I was full and happy : )

I have been here a few times and every time it delivers.The food is good, the drinks are great and the vibe is always on point.Every time I’ve visited I’ve had to wait but that isn’t a big deal as the bar is good and the cocktails are incredible.This is a great place to bring people who are visiting NY, great spot!

I would love to agree with your review as the dinner was seriously expensive, and the space is really trying but this was the most disappointing meal I've had in the last year in New York City. Running the line between trendy, and upscale the decor and staff seem confused, Our waiter tried to push on our group of 4 a 50 ounce côte de boeuf for $214, the chicken for two $72, four side dishes all $10 a piece and oysters MP.

That's all great and fine if you want to get gout or have extreme appetites, but the food was offensive. The Chèvre salade which used kale as the greens had about three crumbles of decent goat cheese, and was so over salted you could not taste the ingredients whatsoever. Kale is a beautiful flavor when prepared correctly, but it is also particularly hard to cover up and this salad achieved that in an unwanted.

The two guests accompanying my husband and I had ordered the chicken and I may be mistaken but I believe that this should be a stand out dish at any restaurant who presents themselves as French. The over presentation with the "crêpes" may be pulling away from the focus on the preparation of the actual chicken, and to me  a roast chicken dish should not need sauces and pickled peppers to accompany it when juicy, properly seasoned with crisped skin.

My poisson (Black Bass) dish was the same story -  so over oiled and sauced that you could not even taste the fish.

The largest sin being the pommes frites.... offensive to anyone who has indulged in french fries from even McDonalds.

The best part of the dinner was the bread and fromage blanc brought to the table at the beginning of the meal, that should say something about the rest of the meal.