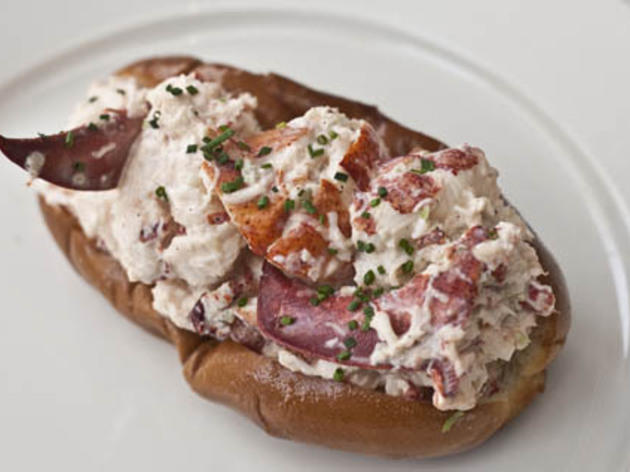 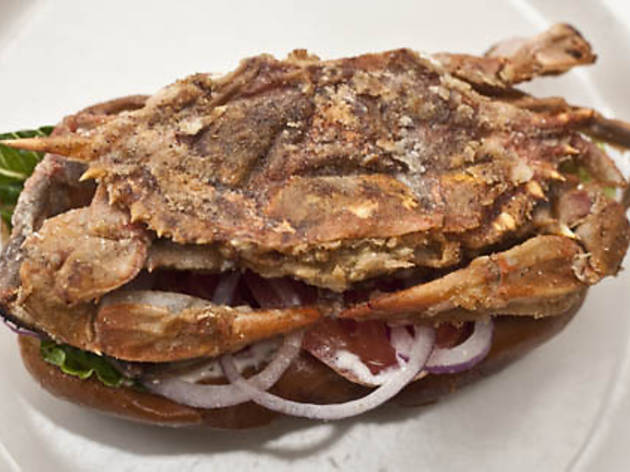 For me, summers tend to revolve around a religious devotion to shellfish. I take regular pilgrimages to the shacks of Maine, Cape Cod, eastern Connecticut and Massachusetts’ North Shore. After visits to various seafood shrines, a Holy Trinity has emerged of all things good and unkosher: clam chowder, fried clams, lobster roll. Ed’s Lobster Bar, started by the longtime sous chef at Pearl Oyster Bar, nails all three, making any peripheral flaws fade away like a receding tide.

Ed McFarland (yes, the “Ed”) is rolling with the downtown-shellfish-shack formula pioneered by Pearl, and mimicked by spin-offs (Mary’s Fish Camp) and imitators (Ditch Plains) alike. That would mean cramped quarters, no reservations and a studied informality. In Ed’s case, the look is clean and whitewashed, with painted brick and wooden walls, plus a gorgeous 29-seat marble bar, which runs the length of the bowling-alley-wide Soho restaurant. (Those desiring one of the few tables in back should be prepared for extended waits.)

Now, for the Trinity: The pale clam chowder incorporates pulverized potatoes into the creamy broth, as well as in big, starchy chunks; the clams are chopped fine, and an in-shell littleneck sits in the middle like a cherry on a sundae. Gently fried clams carry only the lightest flour coating—an unobtrusive treatment for the sweet, chewy bellies, sourced from Ipswich, Massachusetts, the dish’s spiritual home.

Given the name, most come for lobster, and what Pearl’s is to bivalves, Ed’s is to that crustacean: Lobster is served steamed, grilled, broiled, chilled or stuffed into a pie. But the majority of patrons I spied on my visits went straight for the lobster roll, which scores early points just for ample size. The meat, mostly premium tail, knuckle and claw, overflows a buttered, top-cut Pepperidge Farm bun. McFarland paints it delicately with mayonnaise—a mercifully light touch given the fresh ingredients, flown in daily from Maine. The accompanying crisp fries and crunchy homemade pickles are superlative.

If mayo isn’t your condiment of choice, behold the excellent raw bar. The jumbo shrimp, littlenecks and, especially, oysters were deliciously clean, complemented by a boozy white-wine--and-vinegar sauce with crushed peppercorns, and a cocktail sauce heavy on horseradish and Tabasco.

When McFarland strays from the fish-shack standards, he encounters trouble. For instance, seeking a green oasis in this sea of butter, I ordered a Caesar salad, which was way out of balance, with far too much garlic. A linguine in clam sauce was shockingly bland—it was as if the chef put some big, briny steamers in pasta, and did nothing else. The lobster salad, meanwhile, was small enough to be a joke: a tiny claw’s worth of meat, a sliced avocado and some lettuce and tomatoes, all for $21.

Desserts are similarly awkward. Two out of the three offered—a smoked-almond sundae and an “ice-cream sandwich,” which is basically the sundae on a hot dog roll—use the same vanilla ice cream and sad, cold chocolate sauce.

But these were aberrations. The beer and wine lists were a saving grace, particularly the latter, which had no bottles over $60. Ed’s doesn’t replace Maine or Cape Cod, but it’s nice to find a shellfish shrine a lot closer to home.