If you pass by the intersection of Bleecker and MacDougal Streets in Greenwich Village, a pretty restaurant glows on its southwest corner. If you click around Figaro Café’s website, you’ll find a claimed established date of 1957, cool black and white photos and the names of purported previous visitors like Jack Kerouac, Lenny Bruce and Bob Dylan. If you pop in—reservations do not appear to be necessary at this moment, abundant as they are—you might find some reasons to return, though they will not be related to the food.

Only those first and third points are relevant to potential present day diners, but, being that Figaro’s public and press-facing communications lean as far into its vintage branding as an imbiber on a bar stool at a place where the drinks come out quicker, the middle demands mention as well. The original Le Figaro Cafe operated at this address for most of the 51 years following 1957. It was a Blimpie and an ice cream shop between 1969 and 1975. When its penultimate revival closed in 2008, “there wasn’t any widespread outpouring of grief,” according to the New York Times. And, with history poised to repeat itself, “the appeal really wasn’t about the food.”

The location was briefly a Qdoba in the nearly decade-and-a-half before married couple Marta and Mario Skaric (previously of The Standard Grill and Benjamin Restaurant Group) and their business partner Florence Zabokritsky reopened it once more under the lightly edited name this past fall.

Previous design elements are gone, according to the New York Post, but the reimagined space is attractive absent from its past. Pages from the French newspaper Le Figaro partially paper walls in an efficient nod to preceding decades. A nautical blue otherwise anchors the color scheme. It’s splashed behind the long, gleaming white bar to the left and across the plush upholstered banquettes to the right. There are a few particularly cozy nooks throughout, including one in the windowed corner up front, and the lighting’s just right all around. The room expands toward the back, which has larger tables conducive to groups.

The menu could theoretically work for groups, too. There are enough options to choose from and they’re mostly fine enough to get away with being the person who suggested the place on an otherwise fun night. Things even begin promisingly enough, with complimentary bread that’s virtually disappearing from NYC restaurant tables. The rosemary loaf is warm and generous; flaky on the outside and almost doughy on the inside and as comforting as the most successfully executed pop-and-bake in creation. Priced items struggle to match.

Colossal shrimp ($23.92) are nicely sized and attractively balanced four to a plate on a bed of ice with cocktail sauce and lemon that turn out to be necessary rather than simply expected. The color and texture are right, but they’re just a little fishy—just fishy enough to notice—though that can be quickly obscured by their accouterments.

The beginning of dinner here seems fired at lightning speed, so the plant-based “scallops” ($21.84) might arrive before you’ve effectively doused half the crustaceans for palatability. These, however, are a welcome distraction, adeptly sculpted from king oyster mushrooms with pleasant, mildly earthy notes that make them even better than a basic bivalve alternative. Trios are served on a fennel purée that might be the best thing from Figaro’s kitchen. It’s über-creamy with a bit of fresh texture from charred ramps. You’ll want to reserve some bread for spreading, though you’ll need to be assertive to keep either from being collected too soon.

This might all make a case for Figaro Café as more of a drinks and snacks kind of place, and it could still be under certain circumstances, but the cocktails are also just so-so. That the perfect martini ($16.64) isn’t quite cold enough does not inspire confidence in the other seven tini-takes that include a pumpkin spice espresso. A rye Manhattan ($17.68) is inexplicably thin, which, again, does not bode well for the bar’s signature recipes. They’re also a little slow to flow, incongruous with the plates’ too-swift pacing. Some enjoyable beer and wine varieties are also available, but a lot of stylish places serve enjoyable beer and wine.

A lot of places also serve steak, many even in this immediate area. Figaro Café serves an OK 12-ounce, bone-in New York strip ($49.92) with chimichurri, flirting toward well-done. That it’s served to those specs when ordered au poivre, medium, eh, it’s really just half a degree of doneness, and these things happen, even at better restaurants. But the one-dimension sauce’s overwhelming whack of lime rarely does. Likewise the accompanying fries, pale as a naked potato and almost reminiscent of Wendy’s, but without the fast food charm and with more of the apparent recent residence in the freezer.

The duck leg confit ($37.44) is similarly situated. The waterfowl itself isn’t too bad, tender enough under the surface, even with a skin that’s more crusty than crisp. But its bed of grits is curiously dry and neither preparation surpasses ambitious museum restaurant quality. Lovely as it is, the environment here couldn’t be expected to live up to that occasionally caveat-inviting expectation.

The Vibe: Pretty, comfortable and equally well-suited for intimate pairs or larger parties. 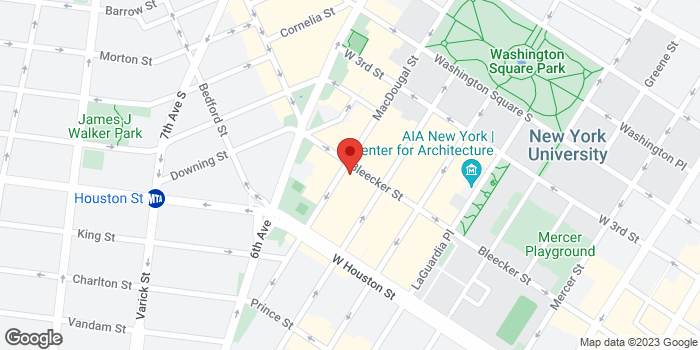