The great NYC pizza debate: To fold or not to fold

New Yorkers argue about a lot of things, but nothing gets their blood boiling like the debate over folding a slice

Our rats love New York pizza just as much as our citizens do, and with good reason: We sling a pretty stellar slice. But once you get your hands on a piece of the pie, do you fold the slice or not?

I posed this question to the internet, using all of my personal social media channels and many of Time Out New York’s to get as many opinions as possible. Countless judgements on the matter were received (some of which bordered cyberbullying, but I can take it). The pool of 2,476 responses included Time Out’s editors and Tastemakers, Instagram influencers, James Beard Award-winning chefs, pizza experts, food writers, born-and-bred New Yorkers and every member of my family.

As a former varsity captain of my high school’s speech and debate team, it would be only be fair to address arguments from both sides before declaring a winner. Let’s break down the fold and the beautiful.

1. It’s a matter of civic tradition. No matter whether it is right or wrong, you have to respect the eating etiquette of NYC. For New York natives like myself, that means following suit and not asking many questions.

“Pro-fold. It is the most efficient way to tame a slice. This is standard early learning public school curriculum in Bay Ridge.” —Matthew Hyland, chef, Emily Pizza and Emmy Squared

“For me, folding was a learned trait. My parents are native New Yorkers, so at an early age that's how I saw pizza consumed. I recall vividly the first time I encountered uncultured swine eating from the flop. It was a birthday party at a roller rink (Do kids still have those? Do roller rinks still exist?) and all these sloppy kids were dangling greasy pizza over their heads like Victorian women eating grapes on their fainting couches. It was hell on rollerblades.” —Rocky Rakovic, head of content, Time Out North America

2. You can travel with ease. Who has time to sit down and eat these days? Whether you’re rushing out for any bit of sustenance you can get between meetings or stumbling down the streets after a night of bending your elbow one too many times, a seated meal just simply isn’t always in the cards. The fold allows you to walk and talk and eat your slice with your other hand completely free for activities of your choosing.

“If you don't fold your pizza, you can't walk with it, and that’s not efficient.” —Delia Barth, video editor, Time Out New York

3. You won’t burn the roof of your mouth. Patience isn’t always a virtue for the average New Yorker. We want it all and we want it now. What good is a beautiful slice of ‘za if you have to wait for it to cool off before really going to town on it? Shielding your mouth from the bubbling cheese with crust on both sides of the fold allows you to beat the system and get a head start on your binge.

“Definitely fold, so that the crust can protect the roof of your mouth from that hot gooey cheese!” —Stephanie Sumulong, Time Out New York Tastemaker

4. It’s plain history. Folding pizza dates all the way back to its origins in Italy. We’re not being stubborn New Yorkers, we’re being authentic.

“Eating pizza slices folded it goes all the way back to pizzas origin in Naples. Eating ‘al libretto’ or ‘as a book’ is a typical way to eat pizza where it all began.” –Scott Weiner, pizza expert, Scott’s Pizza Tours

1. You rush through eating your slice when you fold it. Sometimes you’ve got to sit back and enjoy the simple things in life. Why inhale your slice in half the time when you can get twice the enjoyment with it unfolded? You’re going to have another slice either way, so you might as well make every bite count.

“The pizza lasts longer unfolded so it can be appreciated, loved, caressed the right way!” —Jamie Cohen, my sister

2. You don’t give the toppings the respect they deserve. For a plain-Jane cheese slice you may get away with it, but how can you fold up delectable toppings, carefully scattered for peak enjoyment. While we’re not going to address the rightful place of baked ziti on a pizza, it’s definitely not built for creasing.

“I understand this may be completely illogical and absolutely not rooted in reality, but IN MY MIND, if I fold my pizza, I lose out on huge chances to connect my tongue with the sweet taste of meat, cheese and oil every bite. I only get to enjoy pizza now and then. Am I going to miss out on flavor just to be a little neater? Not a chance, buddy.” —Jillian Anthony, editor, Time Out New York

I’m not going to conclude this debate with a whole “you do you” spiel. There is a clear winner based on votes, the number of arguments and common sense: Fold your slice or GTFO. Precisely 1,488 (or 60 percent) of our voters were pro-fold and the arguments made were quite compelling, like that of food writer Allison Robicelli, whose perspective was, “Pizza is supposed to be folded. What sort of asshole question is this?”

It’s this level of New York pride and confidence that’s almost as important as the issue at hand. So I’ll end this debate with one last sentiment to hopefully find some common ground between parties (or inspire the next debate): Fold or no-fold, just keep those grease-absorbing napkins away from your slice. The only kind of dabbing there should be is your arms flailing from the joy of pizza carnage.

Now try some of the best pizza in NYC, folded or not 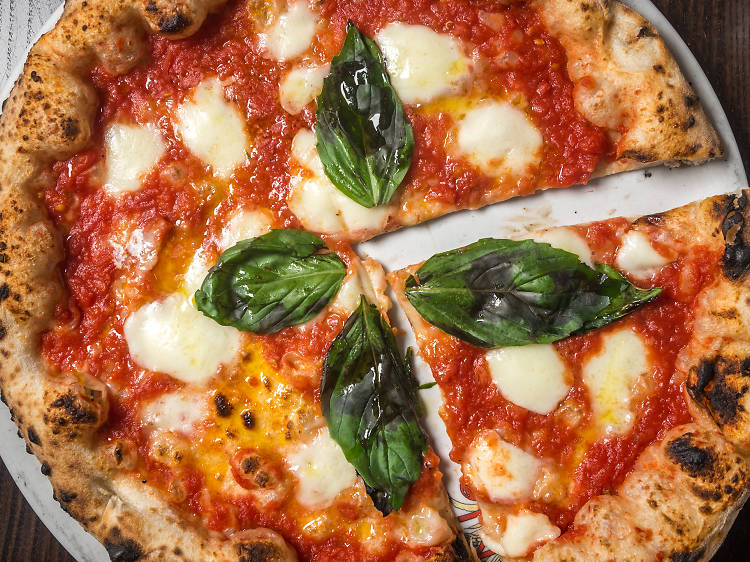 Our five-borough tour of the best New York pizza skips from legendary institutions to new-wave joints. Here are our picks of the reigning pies in Gotham.