There’s never been a better time to be a young chef in New York. All across the city—but in Brooklyn most of all—upstart toques are working together in teams, bouncing ideas off each other, sharing the labor and risk. Their role models are tandem stars like Rich Torrisi and Mario Carbone, or the two Franks behind Prime Meats and Frankies. For the most part, their fans are as fresh-faced as they are.

Richard Kuo and Fredrik Berselius, veterans of top New York kitchens—they worked together at Seasonal and Corton—are the latest team worth watching. Frej, their half-a-week pop-up restaurant, is a public tryout of sorts tucked in back of Kinfolk Studios—the same open-plan, multiuse space that served as a staging ground for Maharlika Filipino Moderno.

For the past couple of months, Kuo and Berselius have been stealthily doling out ambitious food there each Monday through Wednesday (a Tokyo-style ramen pop-up, Yuji Ramen, takes over Thursday through Saturday). The chefs practice a particularly elegant brand of New Nordic cooking, with the same raw, back-to-the-earth sensibility you’ll find down the street at Isa and across the river at Acme, but with a much more precious, tweezered appearance. While jaded gastronauts who got in early at Noma in Denmark or Faviken in Sweden—two of the most celebrated restaurants in the world right now—might not find the food novel, for the rest of us, Frej is a great bargain intro to this cutting-edge school of cooking.

Don’t expect a feast—they serve small food on big plates—but do anticipate an engaging experience. After the warm, tangy bread with good salty butter, there might be a tiny still life of smoked fish and wild herbs (in addition to trawling New York Greenmarkets, the chefs forage through city parks for indigenous greens, shoots and roots). The prix-fixe menu, which includes five courses for just $45, is always evolving.

Most of the dishes have the naturalistic appearance that’s become a hallmark of modern Scandinavian cuisine, as if the ingredients had simply grown in harmony on the plate. On a recent visit, there were miniature thickets of chickweed and dill tangled around flaky shards of house-smoked trout and pebbles of fried rye bread, with a shimmering pool of emerald dill oil beneath. This is glossy-mag cooking, catnip for Instagram addicts. Another beautiful dish featured an earthy sunchoke puree among slivers of crisp pickled pear, burnt hazelnuts and a mellow mash of velvety beef liver. A soft-poached egg arrived next, its yellow and white cooked to the same jiggly texture—a culinary trick that’s old hat by now among modernist chefs—so that the resulting custard melts around hunks of sweet scallop and poached razor clam, nutty hen-of-the-woods mushrooms and crisp toasted seaweed.

The umami flavors so dominant in Northern Europe these days were particularly potent in the penultimate course: gorgeous pink petals of sous vide cooked beef, smoky from charred hay in the bag, served on sweet-and-sour rutabaga with wisps of mild mustard cress and frail slivers of apple cider gelée. More primal flavors finished the meal, in a deconstructed parfait of cardamom-scented hibiscus cake, intense freeze-dried raspberries and sugary walnuts.

While the casual, sometimes raucous vibe inside Kinfolk Studios fits the price point, the food deserves a bit more room to breathe. But this is clearly just the beginning for the chefs behind Frej. Word has spread with the momentum of a viral video, and what began as a sort of underground supper club has already grown into a hot food destination, with tables booked weeks in advance. Our advice: Keep haunting that reservation line. You’ll want first-responder bragging rights when Frej matures out of its pop-up setting.

Eat this: The five-course tasting menu changes often. Look for dishes like smoked trout with fried rye bread and dill, sunchoke puree with beef liver and hazelnuts, and hay-cooked beef with rutabaga and apple cider gelée.

Drink this: Begin with a palate-rousing Fort Point, an elegant spin on a Manhattan with rye, punt e mes and Bénédictine ($10). The 90 Wythe is a more refreshing option, like a well-made minty mojito with tequila instead of rum ($10). The list of local and international beers includes a nutty Old Yankee Ale from Connecticut’s Cottrell Brewing Co. ($6). Among the inexpensive wines by the bottle and glass, the Poivre et Sel pineau d’aunis—a peppery red from the Loire—is a particularly good match for the earthy food ($39 per bottle).

Sit here: There are no bad seats to be had. The few tables all offer the same view out toward the bar into the open-plan space.

Conversation piece: Kinfolk Studios is owned by a quartet of young designers best known for their very expensive custom-made Japanese track bikes. They split their time between New York and Tokyo, where they have a hybrid bike-shop-and-bar. 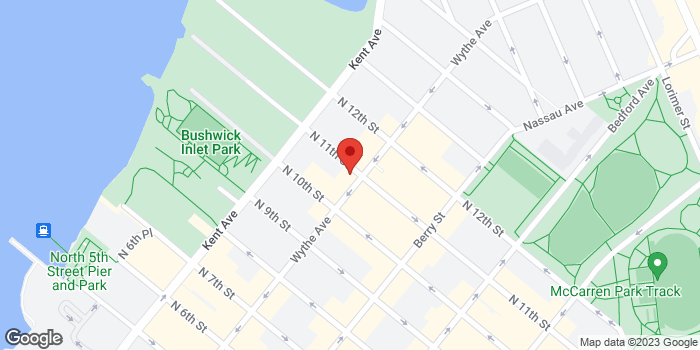