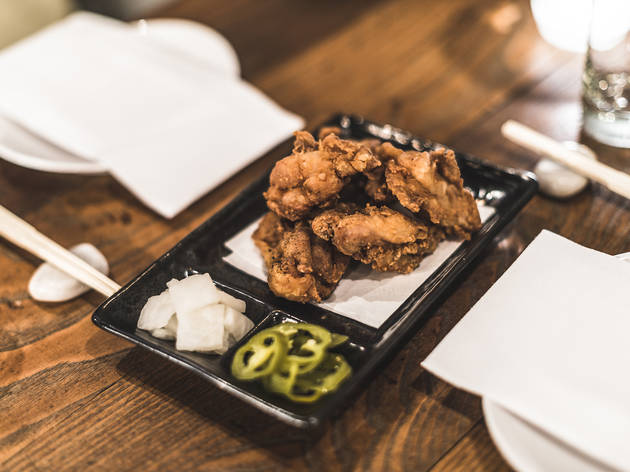 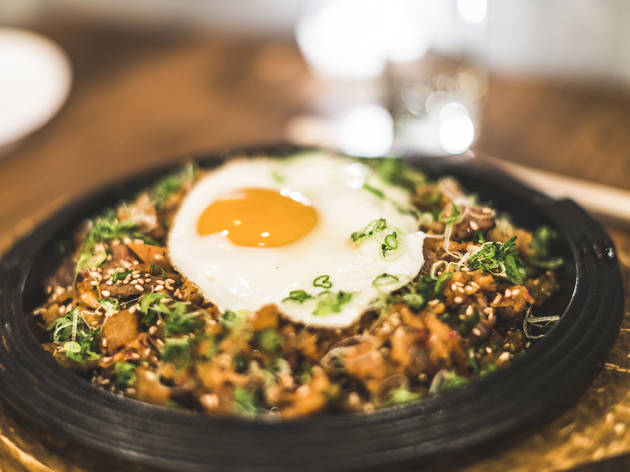 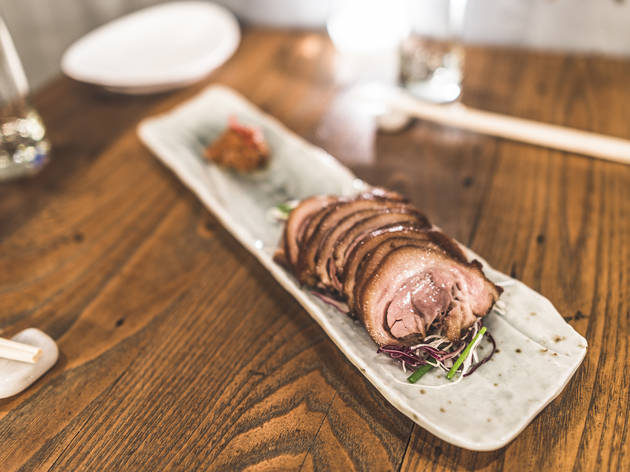 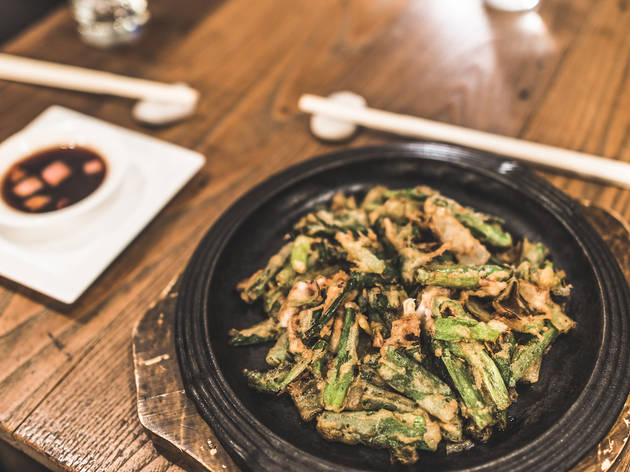 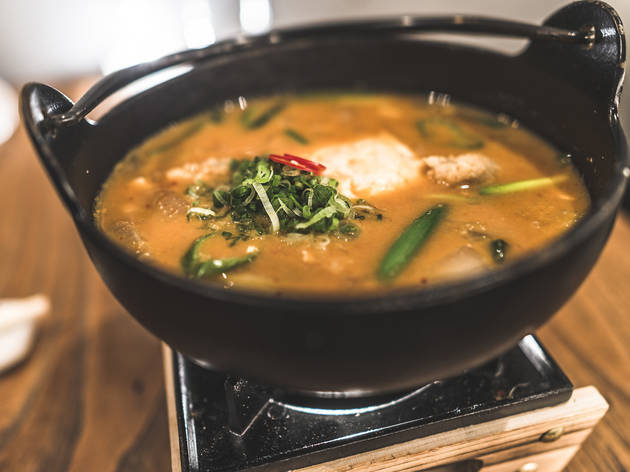 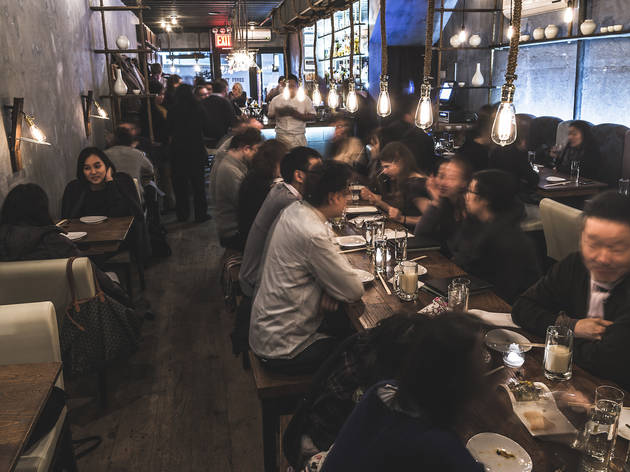 The cult of Korean food has been steadily building steam over the past few years. Unleashed from K-town confines by second-generation supertoques, Roy Choi out west and David Chang in New York, you can now find it all over the culinary map—a foie-topped bibimbap at M. Wells Dinette in Queens, or a version of the country’s fried chicken drenched in Frank’s Red Hot at Talde in Brooklyn. Even T.G.I. Friday’s has its own Korean-Mex tacos.

Seoul-born Hooni Kim grew up with the food that has inspired so much of this cultural tweaking. At Danji—the jam-packed midtown spot he opened in 2011—he’s been doing some of the same, serving bulgogi sliders, kimchi paella and honeyed hot wings to a boisterous young crowd.

His new restaurant, Hanjan, looks much like its Hell’s Kitchen precursor, with Edison bulbs, communal seating, and a menu split down the middle into “modern” and “traditional” halves. Beyond the cosmetic parallels, though, lies a more soulful endeavor, an update on the old traveler’s taverns—joomaks, they’re called—popular across South Korea in the 1960s and ’70s.

Kim, who’s worked at Daniel and Masa, brings fine-dining polish to old-fashioned recipes, without ever straying too far from the roots of the dish. Braised boneless pig’s feet, jokbal in Korean, are so popular in Seoul that there are entire restaurants devoted to them. Kim’s “modern” spin—steeped in star anise, cinnamon, ginger and rice wine—is less gelatinous than usual, the long-simmered swine served in beautifully supple and aromatic slices.

His Korean fried chicken also departs in subtle ways from the norm, the crisp, battered nuggets of brined thigh meat radiating garlic from out of their core, their great flavor hidden under a sauceless crust. The chicken itself is of blue-ribbon provenance, fresh-killed in Brooklyn the day that it’s cooked. Its myriad parts, including heart and gizzard, come threaded onto short wooden skewers, grilled an exceptionally tender—and risk-free—medium rare, with smears of terrific, funky house ssamjang (a spicy fermented-soy condiment).

Cod roe sacks—cradling their briny caviar cargo—float in an intense spicy broth that’ll warm you up from the inside out. Hot stone plates hold gorgeous, golden rice-flour pancakes, studded with sweet squid and scallion batons as abundant as chocolate nuggets in a Chips Ahoy! cookie. Kimchi, with a well-aged hot-sour tang, adds great depth to crispy rice on a sizzling platter topped with a fried egg and speckled with brisket, and to another dish of tender, seared pork belly with fresh creamy tofu in a big scoop on the side.

Hanjan’s desserts—there are just two—sound like the usual Asian-restaurant throwaways. But the sorbets served in side-by-side scoops—potent ginger and nutty toasted barley tea—are both bright and fresh. Mochi ice cream with sweet red-bean sauce warm on the side is also much better than you’d expect it to be, rich and creamy, not the gluey texture of sticky rice.

Instead of fancy fusion footwork, Hanjan elevates humble joomak plates with precise execution and top-notch ingredients. This is robust and restorative cooking, street food and bar snacks an ex-pat would recognize even beautifully plated in a stylish setting—the most rustic tastes of the homeland finally repackaged for plugged-in Gotham diners.

Drink this: The excellent Asian-accented cocktails (all $13) include the Bold Ginger, a piquant bourbon drink with a hint of maple syrup. Among the beers, find Makgeolli, an easy-drinking unfiltered rice beer ($9).

Conversation piece: Hanjan, which means “one drink,” pays homage to classic joomaks, serving good, simple drinking food. The Korean taverns trace their history back a couple of centuries. Their heyday ended in the 1980s.