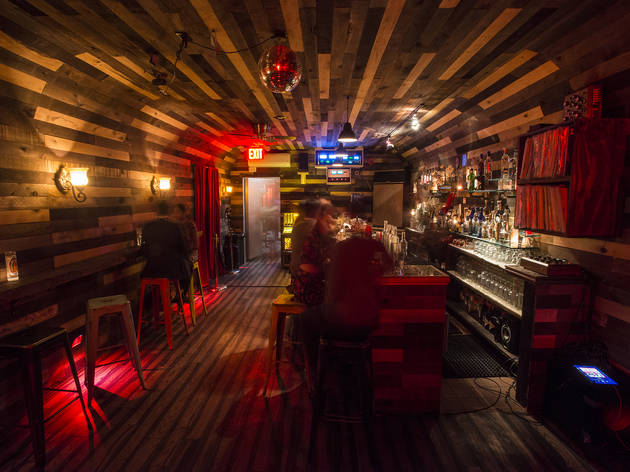 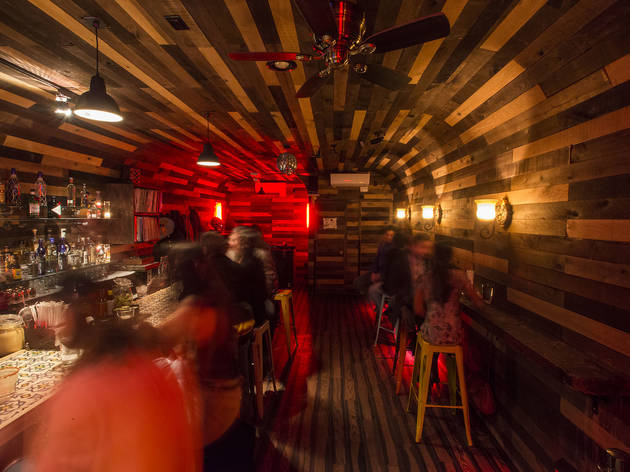 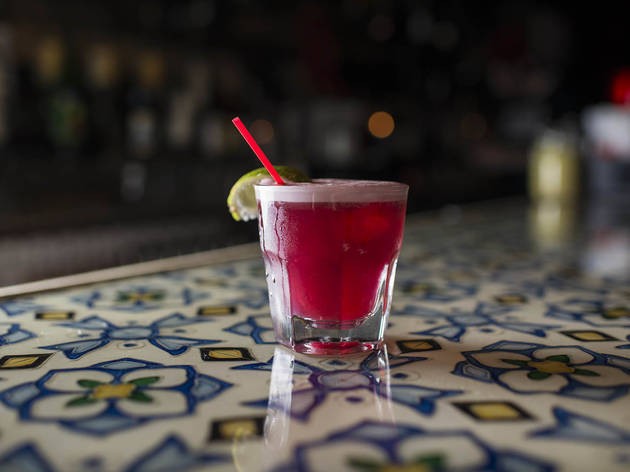 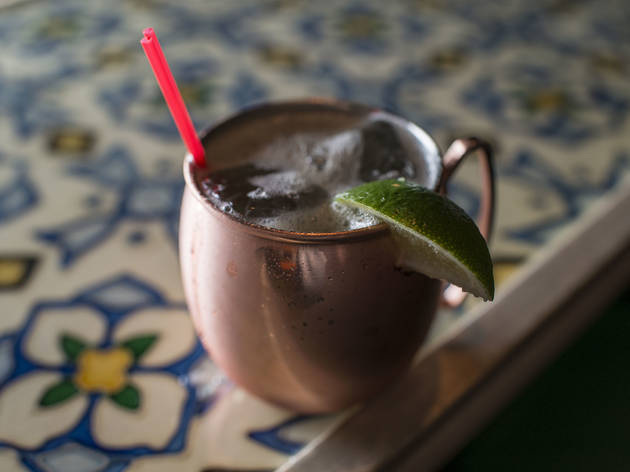 Any excitement about having to hunt down La Milagrosa slowly deflates when you hear a passerby say, “Oh, that’s supposed to be the new speakeasy? It’s not very hidden.” And that’s sort of true. A well-worn HAVEMEYER LAUNDROMAT sign hangs above the entrance, and the front room looks like a garden-variety Mexican grocery, its shelves stocked with dried chilies and jarred salsas. But a beanie-wearing bouncer holding a tablet and asking for IDs at one of the deli’s freezer doors slightly dulls some of the covert fun. Behind that door lies Williamsburg’s new and likely only mescal speakeasy, from La Superior’s Felipe Mendez, a dim room with a hanging disco ball, a vintage jukebox and curved walls plastered in mismatched wood that seems at once intimate, campy and a touch transcendent.

The bar is a homage to the Virgin Mary of Guadalupe (La Milagrosa translates as “the Miraculous”), with votive candles scattered atop back-bar shelves and along the wall-skimming counters. You won’t feel as if you’re in church (the blaring music will see to that), but the barroom’s lack of groove space means you won’t really be dancing with the devil, either.

ORDER THIS: The seven-drink cocktail list is mescal-strong, with standard options like margaritas and subtle riffs such as a Mezcal Mule. The margs are made with your choice of tequila or small-batch mescal: The Jamaica ($11) features rich fruitiness in the form of house-made hibiscus-infused tea, Cointreau, orange bitters and fresh lime. The New Fashion ($11) is just as darkly tart as a traditional old-fashioned, with orange bitters and peel, but the mescal gives it a smoky veneer. Want something stiffer? The menu offers 25 varieties each of mescal and tequila to drink straight-up.

GOOD FOR: A clandestine-cool alternative to your usual Williamsburg bar night. In an era of social-media FOMO, the hush-hush quality of speakeasies is still alluring, as evidenced by the fresh-faced Brooklyn crowd that piles into the small wood-paneled room. On a recent Friday night, the imbibers shifted from beard-oiled hipsters to buttoned-down yuppies; regardless, the demographic rarely spiked past the age of 29.

THE CLINCHER: As an avid record collector and part-time DJ, Mendez doesn’t skimp on the tunes, dubbing the bar a “listening room,” with high-end acoustics–a McIntosh receiver and two Klipsch speakers–built in. The crowd-pleasing throwbacks from Fleetwood Mac, Toto and the B-52s give way to a live DJ spinning tunes like electrofunk, Japanese soul and cumbia on vinyl later in the night.