Not every talented cook can make the transition from kitchen lieutenant to restaurateur—especially if the skills don’t extend beyond the stove to crafting a menu and scene that diners will dig. Haute French vet Andrew Carmellini—who many moons ago executed classics under Gray Kunz at Lespinasse—has had no trouble hatching venues diners flock to, perhaps taking a page from his other old boss, Daniel Boulud, one of the city’s savviest CEO chefs.

Since going his own way, Carmellini—along with partners Josh Pickard and Luke Ostrom—has turned out crackling barn-burners in cuisines outside his training: Locanda Verde (raucous Italian) and the Dutch (an enlightened view of American). So his return to French food at Lafayette was rightfully anticipated: Heads would turn; fireworks would ensue. Yet Carmellini’s new Noho brasserie is more controlled burn than conflagration; you get the warmth and the glow, but not the stunning blaze.

Everything in Lafayette glows: the blue-flamed rotisserie and wood oven, the soft lamps and candles, and the gently backlit bar. The large room enjoys a proper bustle, not a din. Lithe young things tilt their heads over glasses of Sancerre in that golden light at tables, and over at the bar, clutches of suits strain their necks to get the bartender’s attention.

The menu, cooked by longtime Craft executive chef Damon Wise, is suffused with all sorts of food you’ll want to eat, starting with hunks of pain de campagne that have a beautiful rye sourness and chew. Spend some time with the dishes in the “French Market” section: egg Lafayette with smoked sable and trout roe, a sort of Russ and Daughters take on deviled eggs; and scallop cru (as in crudo), served cool not cold, so the briny sweetness has nowhere to hide.

The baked oysters are also a worthy snack, with seaweed butter to temper the salty liquor and toasted bread crumbs for crunch. Beef tartare trades its classic raw-yolk cap for a quivering orb of poached bone marrow; with a dry-aged beef vinaigrette dribbled around, it’s nearly too much for the tamely seasoned meat to take.

“Les pates” (pastas) are tasty across the board, chief among them spaghetti niçoise with raw tuna and roasted tomatoes to ease the steep, salty pitch of olives and capers, and the fleur de soleil noodles—with pancetta, snap peas and mint—which curl in on themselves, yielding a great al dente chew.

All this good food is occasionally undermined by clunky service. One night our clean wine stems were cleared before the bottle had arrived; our water glasses remained empty for a long, salty stretch; and our waiter disappeared halfway through the meal.

Some of the entrées could kill your buzz as well. An eagerly awaited rotisserie chicken for two isn’t nearly luscious enough to justify the absence of a deeply browned, crackly skin (Carmellini cooks a way better bird at Locande Verde). Steak frites lacks char and musky depth, and is drowned out by béarnaise butter. Duck au poivre packs the mineral punch that you wanted in the steak, but again, sadly, no crunchy skin.

Redemption awaits in Jennifer Yee’s skillfully executed dessert menu. Her mango-and-lime parfait—with toasted coconut flakes set against soft, brûléed mango—looks unassuming in its little coupe glass, but tastes anything but. Even better is her strawberry delice, sweet crémeaux tempered by a tableside pour of tart strawberry consommé, and just-bitter blond-chocolate lace for a shattering crunch.

It was the best dish I ate, the only one that made my heart race. And that’s the curious thing with Lafayette—that a decorated chef like Carmellini has created a place where you want to be, but where the food doesn’t ignite much ardor.

Price per person: Roughly $120 can get you a few drinks, a few small plates and a pasta to share, an entrée and a dessert.

Vibe: Josh Pickard, partner in Lafayette, has owned this piece of real estate since the late ’80s, all the way through its incarnations as Time Cafe (with Fez Lounge downstairs) and Chinatown Brasserie, which is said to be moving to a smaller space nearby.

Soundcheck: Appropriately buzzing, but not too loud for conversation 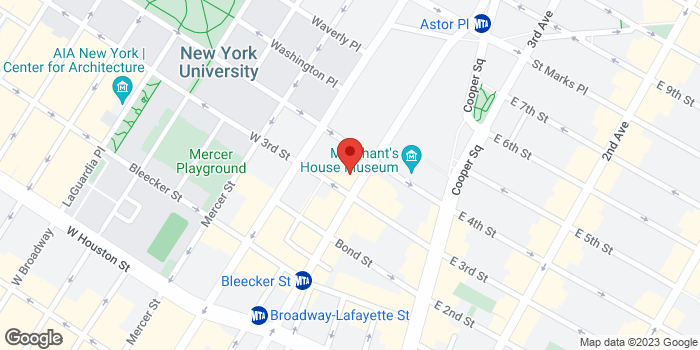