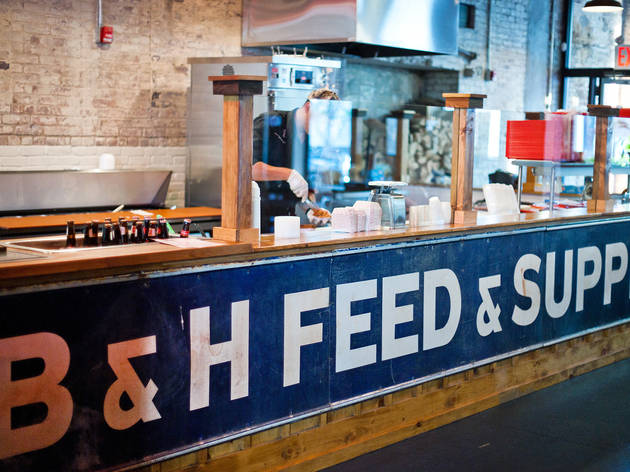 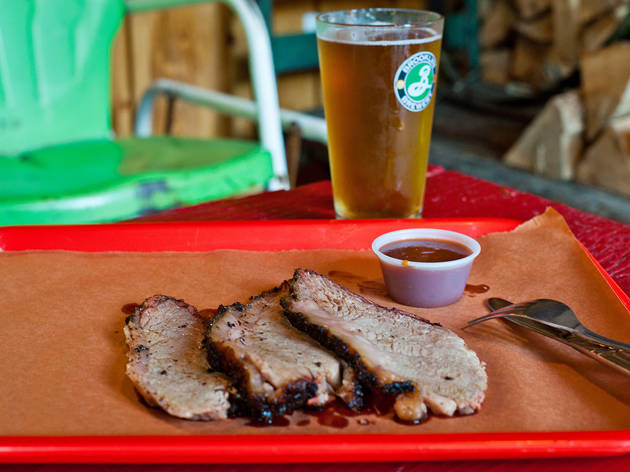 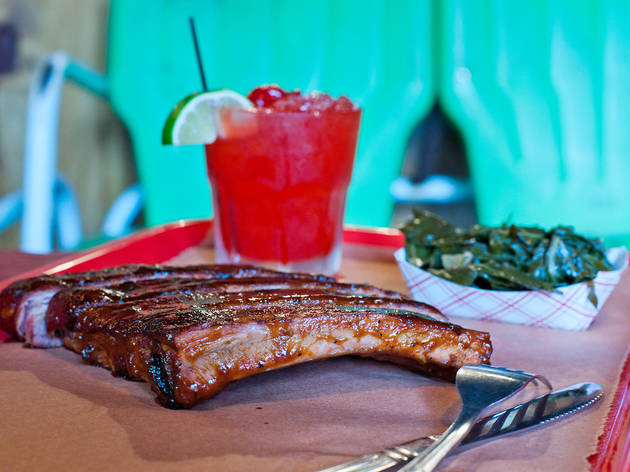 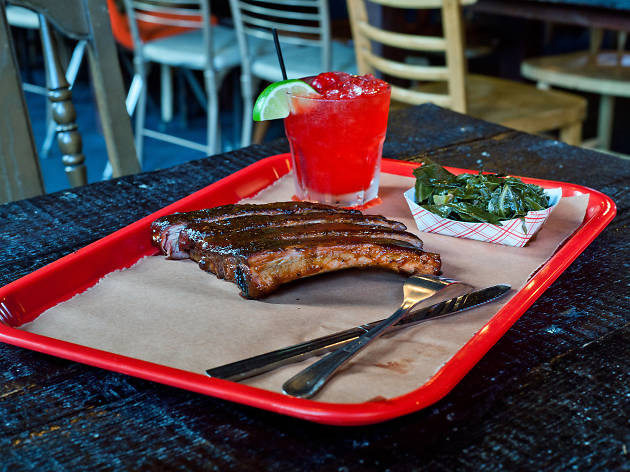 Hill Country, Fette Sau, Daisy Mae’s, Dinosaur: Back in the aughts it seemed like a new barbecue joint was opening every week. That boom brought us plenty of great low-and-slow meat, but barbecue—unlike, say, pizza or burgers—still hasn’t peaked in NYC.

Mable’s Smokehouse and Banquet Hall, which opened recently near the Williamsburg waterfront, brings this all-American art form into a laid-back and saloonlike environment: The soundtrack is Blues Brothers, the patrons are young and rowdy, and a big wooden bar across from the chow line serves Lone Star beer, pickle-juice cocktails, and trashy snacks like Frito Pie and Velveeta dip.

Artist turned pit master Jeff Lutonsky, who opened the restaurant with his actor wife, Meghan Love, takes his craft far more seriously than this roadhouse setting suggests. His smoked meats and church-social sides, while not quite in the top tier

in the city, are certainly better than your average alcohol sponge. The first-time restaurateurs—natives of Oklahoma and Kentucky, respectively—pumped their families for recipes. They named the place for Jeff’s grandmother Mable, the source of their top-secret sweet and tangy barbecue sauce.

beer signs, stuffed deer head and vintage LPs that fill the wood-paneled space. Their regional focus, crossing state lines, is just as much of a hodgepodge. The very limited menu, featuring just three meats and a handful of sides, includes Texas-style moist, fatty brisket—beautifully smoky and exceptionally tender—dry rubbed in copious black pepper before being left to cook for 12 hours in a Southern Pride smoker. The pork ribs, from the Oklahoma side of the border, are just as succulent, with a great caramel char around the edges from a pass on the grill after they emerge from the smoker. Only the Kentucky-style pulled pork shoulder disappoints, the mushy meat doused in too much of that secret-recipe sauce.

As at most iconic barbecue joints, the sides take a backseat to the meat. The mac and cheese, made with gobs of Velveeta, is catnip for neo-rednecks, but it’s still pretty tasty: The lush, creamy sauce clings to noodles that still have some bite. Better yet are the crisp and smoky braised collards with chili vinegar and bacon nuggets, or the corn off the cob with heaps of butter and more bacon.

There’s pie for dessert. Light and fluffy peanut-butter and bright and refreshing key-lime fillings both come spooned into an exceptionally flaky crust—house baked and surprisingly delicate. Mable’s might look like a good place to get sloppy drunk, but the food here tells another story. Our suggestion: Do both.

Drink this: The bar here offers a modest bourbon selection (Blanton’s, Buffalo Trace). The Frog ($8), among the “fancy cocktails” listed on a blackboard, is a surprisingly mild pickle martini.

Sit here: You’ll have to walk up to the counter to order your food if you plan to eat at one of the big communal picnic-bench tables. You won’t have to budge if you dine at the bar, where the convivial bartender will take both your drink and your food order.

Conversation piece: The dining room is decked out with a trove of salvaged finds. The wood panels on the walls are from an old barn near Buffalo. The owners found the feed-lot sign that hangs near the chow line on a road trip home from Texas.