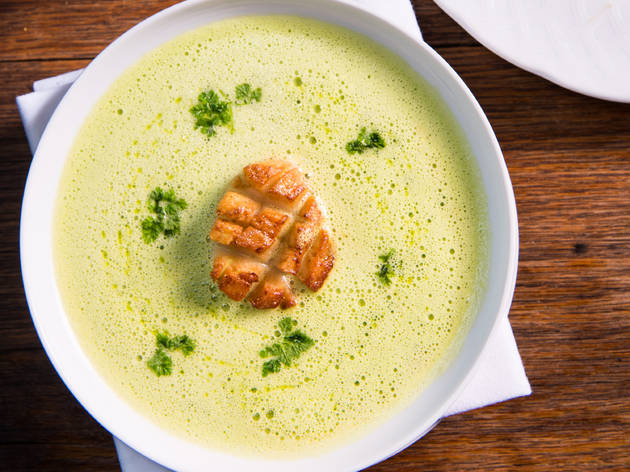 A restaurant fire is the cruelest irony. Chefs spend their lives mastering the art of controlling heat, but without warning those flames can turn untamable. When an electrical fire ripped through Mas (farmhouse) last year, New York lost one of its most underrated fine-dining gems, an urbanized Provençal farmhouse beloved for its French-inflected, fiercely seasonal fare.

But the jewel of Downing Street is back, along with its James Beard Award–winning chef-owner, Galen Zamarra. The cozy West Village space retains its rustic elegance, with sultry candlelight and white tablecloths dressed down a touch by splashes of rough wood and a black concrete bar. Custom Ralph Pucci banquettes are adorned with embroidered throw cushions—Waspy grandma style—sporting evergreens, flowers and deer. While Mas’s ever-changing menus (tasting and à la carte) have largely been refreshed, its two best dishes are prefire standbys so good, they would have returned even if there was a goddamned sharknado: medallions of tender-fleshed raw yellowfin bathed in hot brown butter and strewn with crispy shallots ($26); and tarragon-tinted corn soup ($25), a sweet elixir of corn juice and cob stock blended with truffle butter and graced with an idyllic roasted scallop. Given such evidence of culinary aplomb, we were particularly shocked by the overcooked halibut ($45). Its fume-tinged romesco broth is lovely, but at 45 bucks, a dry piece of fish is hard to swallow. Noticeable missteps are the exception at Mas. More common are well-executed dishes that have yet to find that breathless sweet spot; they satisfy but don’t quite transcend. Take agnolotti bursting with hot smoked ricotta, nestled in balsamic-spiked charred eggplant puree, slicked with milky miso foam and scattered with outsize pieces of toasted walnut ($42). The textures (soft, soft, soft, crunch!) tussle; the flavors (earthy and acidic) never quite cohere. Sustainable New York shrimp from the tasting menu, poached seductively in shrimp broth beurre blanc, read like an interesting story without a discernible plot. There’s some silky fennel puree here, some marinated raw chanterelles there; the components are far from monotone, but together they don’t entirely sing. Given the skills behind the stove, it may only be a matter of time before it’s back to its full strength. But having recently recovered from the blaze that nearly shuttered it for good, Mas is not yet firing on all cylinders.

Pretty posh but in a good way. Really clever dishes ( and a lot of them ) at a good tasting menu price. Something about the atmosphere bugs me a little bit but it is a pretty tasty option in more middle of the road condensed spots. Fab sommelier and bar service. Do the scallop corn soup for sure and any of the fish . Love that you can swap things in and out of the tasting menu.