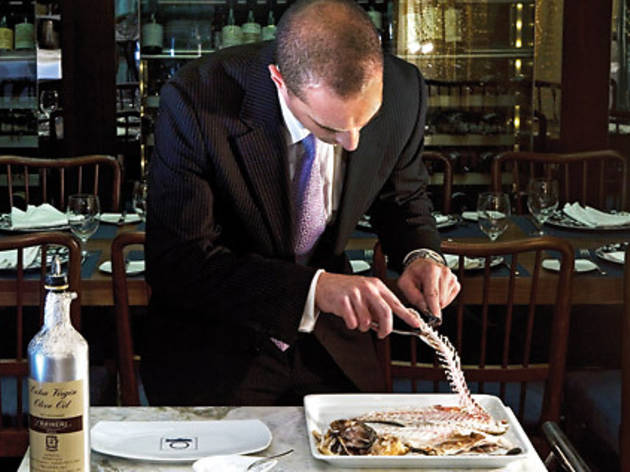 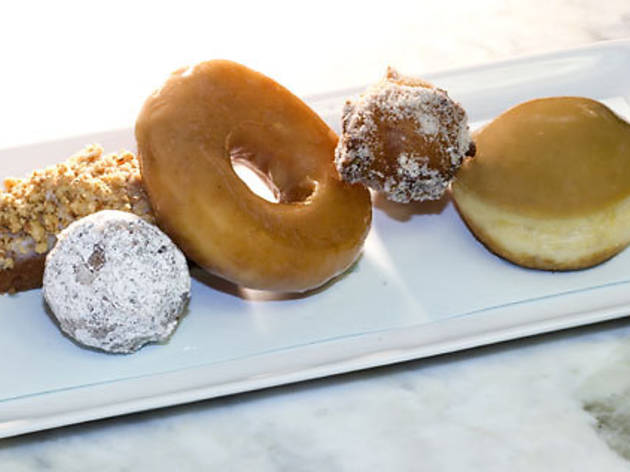 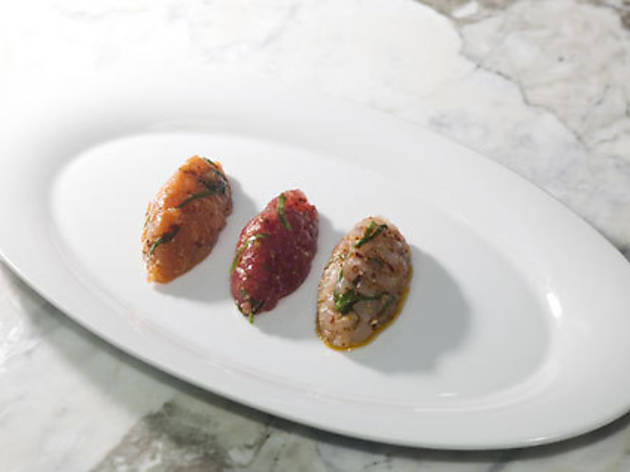 Under the longtime reign of chef Rick Moonen, Oceana ranked among the city’s premier seafood destinations for nearly a decade. But when his successor, the eminently talented Cornelius Gallagher, moved on in 2006, the restaurant began to slip from the radar.

This summer, in an attempt to reignite interest in the 18-year-old landmark, its owners moved the place south into more spacious and opulent digs. If the uptown Oceana had been a snug pleasure craft (it was designed to resemble a yacht), its midtown incarnation—with Brobdingnagian lamp shades and vases and an overabundance of polished white marble—is more like a luxury liner.

The new restaurant, which is twice the size of the old one, sets its sights on a broader audience, with a bar menu—featuring top-notch fish-and-chips (meaty fries and beer-battered hake served on a folded-up section of the Financial Times)—designed to ensnare an after-work crowd. At the casual caf near the front door, tables are arranged around a magnificent still life of whole fish on ice, shimmering like passerby bait through the tall windows. The off-duty suits enjoying happy-hour cocktails and snacks occasionally venture—with clients or bosses in tow—into the serious dining room just past the live-lobster tanks.

With its inconspicuous service, big-ticket wine list and tables arranged with wide channels between them, Oceana’s new inner sanctum is a classic expense-account mess hall—an aquatic alternative to the old-fashioned steakhouses surrounding it.

Like Gallagher before him, Ben Pollinger—head toque since ’06—likes to play around with international flavors. But the more ambitious he gets, the more his dishes fall flat. Pollinger’s globe-trotting touches—evident mostly in a short “composed” entre list—too heavily mask the restaurant’s top-quality fish. Pompano fillets become thick and mealy when entombed in a skin of crisp taro chips, and the accompanying green curry sauce is simply too timid to add much to the dish. Halibut takes on an Italian accent in another innovation, the chef wrapping its meaty flesh in a stripe of prosciutto so thin it barely seasons the fish, with inelegant sides of mashed eggplant and stewed cherry tomatoes.

The kitchen fares best when it sticks to the basics. Manhattan clam chowder is a classic silky tomato-enriched soup, poured tableside over a delicate pedestal of plump clams and diced potato, with chopped linguia sausage—the lone departure from convention—infusing a bright, smoky note.

Raw-bar platters, piled high on two tiers with big shrimp, local oysters, tiny cooked mussels and clams on the half shell, also arrive with a few signature flourishes. While the tartares in diminutive bowls—tuna, hamachi and salmon tossed with soy and sesame—are pristine and delicious (they’re also available as a starter), the piquillo pepper and green-curry mayos offered as adjuncts to house-made cocktail sauce are simply too potent for seafood this fresh.

Among the long list of entres, whole fish, simply cooked, is the most solid bet. The impeccably sourced catch of the day—we tried the daurade—is delivered with old-fashioned fanfare you don’t see much anymore, the fish wheeled up to the table on a marble-topped cart, then filleted right there with a spoon and a fork (the waiter even goes as far as to scoop out the cheeks). The sweet flesh is a fine match for any number of la carte sauces and sides—including creamy hollandaise subtly infused with Moroccan spices, and pillowy gnocchi served under a cloak of sharp Montasio cheese.

Pastry chef Jansen Chan, who has been with Oceana since 2007, is the unsung hero of the restaurant’s second coming. His doughnut platter—featuring wild riffs on the filled and frosted fritters (including Earl Grey icing and salted caramel custard)—is enough of a triumph to make the front bar into a dessert destination. The rest of the place is on its way to becoming a midtown warhorse, where quality raw materials trump a young chef’s sometimes creaky ambitions.

Drink this: The restaurant’s signature “Oceana” cocktail—yuzu lemonade spiked with vodka—is a refreshing starter. Though the wine list is difficult to navigate, the sommelier steered us toward an affordable, food-friendly white—a Loire Valley Pouilly Fum ($46).

Sit here: Though there are stools around the marble-topped raw bar, the front lounge is the place to go for a few briny bivalves or a quick fish-and-chips dinner. If you’ve got business on the brain, book ahead for a corner table in the main dining room.

Conversation piece: Chef Ben Pollinger grows vegetables in his New Jersey garden, providing much of the produce served alongside the restaurant’s impeccable fish.