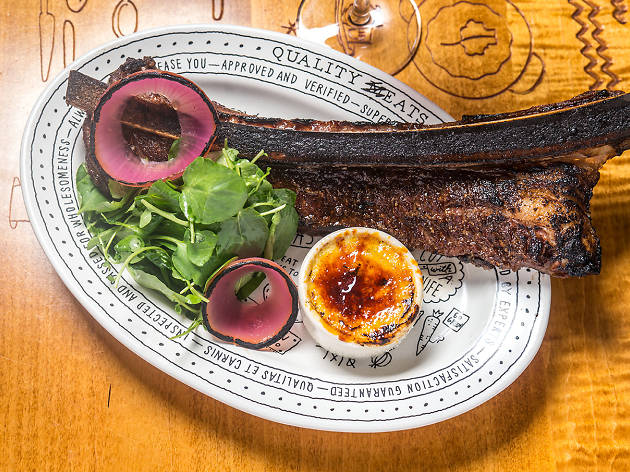 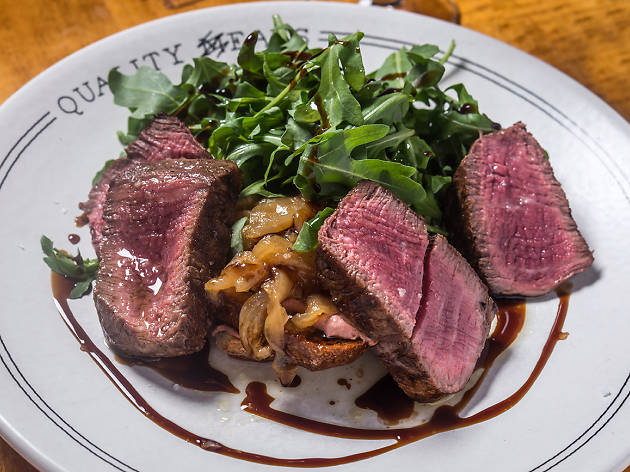 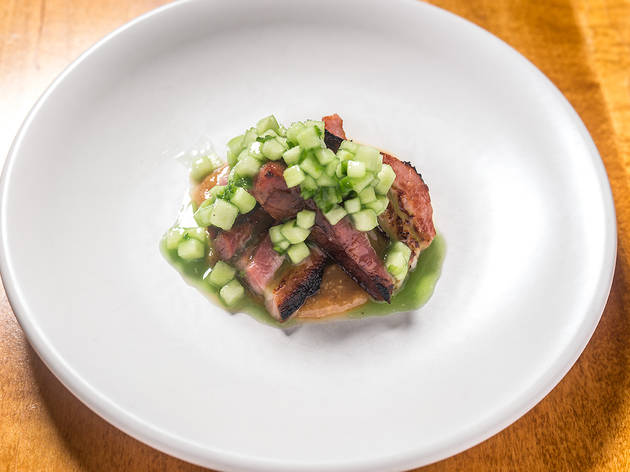 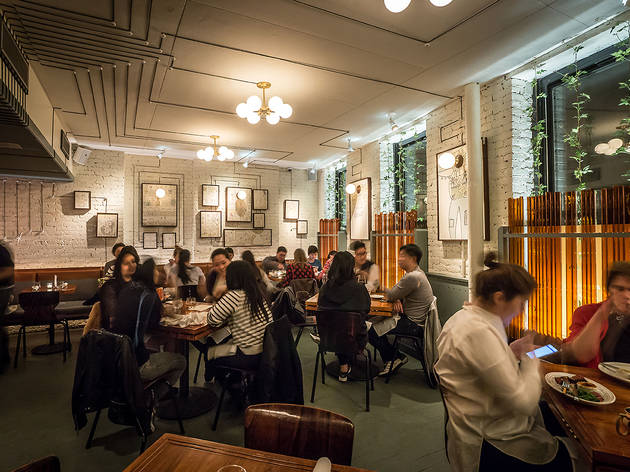 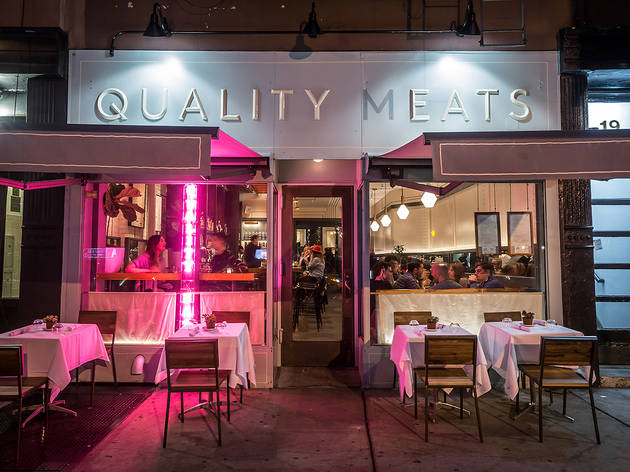 The restaurant’s more-than-meat moxie is clear upon arrival: The sign outside the dimly lit, neon-bathed Greenwich Village space reads QUALITY MEATS but with the M decidedly darkened, rendering it QUALITY EATS. (If you don’t get it the first time, it’s a motif that pops up everywhere, from the handles of the steak knives to the cardboard cups that hold the kitchen’s ice cream sundaes.) And its “millennial steakhouse” PR buzz isn’t unfounded: It’s an altogether more youthful scene than its clubbier counterparts, with ball caps more prevalent than sport coats and Charlie Parker sax riffs replaced by the Weeknd’s pleading yelps.

That Gen Y pep extends to chef Ryan Bartlow’s menu, much of which reads like Peter Luger ripped a bong. There are the hallmark starters and sides—your creamed spinach, your thick-cut bacon, your many permutations of potato. But that creamed spinach comes glopped inside fried hush puppies, ugly little things that are more novel than they are necessary ($9), and the requisite spuds take the form of cayenne-zapped brown-bag curly fries ($8) and pull-apart baked-potato monkey bread slathered in bacon butter ($6). The most rewarding of these updates is the bacon ($15), sizzling, inch-thick Nueske’s slabs that Bartlow playfully tricks out with a smear of crunchy peanut butter, a lime-green shock of jalapeño jelly and a smattering of sweet minced Granny Smiths. It’s the stuff of stoner dreams.

It’s not all parody, though. A salad of juicy lump crab, cubed avocado and pink grapefruit is a refreshing reprieve from all the daffy decadence, bright in a cilantro-citrus vinaigrette ($16); and earthy roasted-beet tabouleh with smooth kabocha-squash hummus and cracked wheat ($13) is the kind of vegetable innovation we’d expect from a place like Dirt Candy, not a steakhouse.

But no matter how creamy the scalloped sunchokes ($8) or how current the soundtrack or what the sign outside says, it can’t distract from the fact that the place is a steak restaurant. There’s no porterhouse or New York strip to be found on Bartlow’s menu—instead there are offcuts like a long-bone short rib ($25) and top-blade flatiron ($23), all issued out on whimsically cartooned platters with a ramekin of corn brûlée, a snatch of greens and pickled onion rings. In a world of three-figure chateaubriand, the meats are exceedingly economical: The priciest, the Don Ameche, clocks in at $29; the cheapest, the Bavette cut, at $19. But you get what you pay for—the hanger ($25) proved underseasoned and the skirt ($28), exceptionally chewy. Quality eats, sure, but quality meats? That’s questionable.