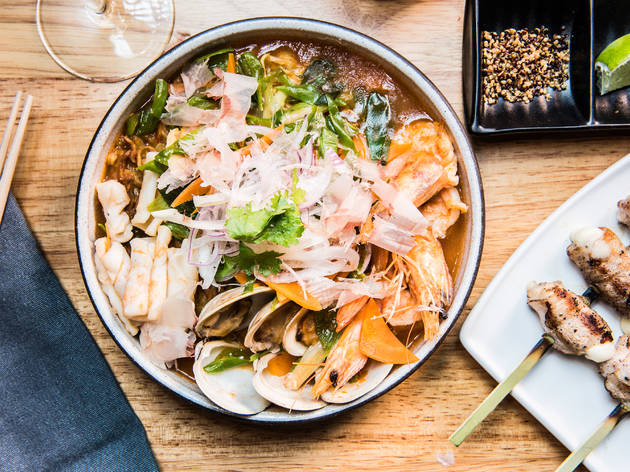 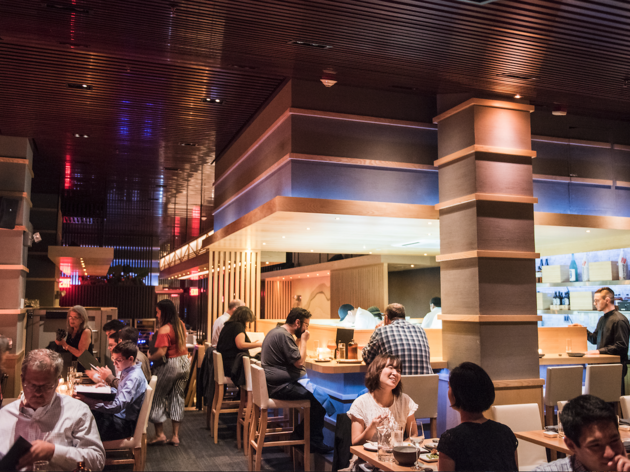 The buta queso skewer at Sen Sakana is pretty addictive. A diminutive bundle of oozing Peruvian cheese ($7) is rendered crisp by Japanese binchotan charcoal, wrapped in pork belly and dunked (at your discretion) into its accompanying condiments: sweet and earthy miso-spiked aji panca sauce and fried quinoa to add some crunch.

This east-west hybrid is an example of Nikkei cuisine, a marriage born in the late 19th century when Japanese rail workers were posted in Peru. Helmed by executive chef Mina Newman (Edison Ballroom), whose mother is from Peru, and Osaka-born chef Taku Nagai (Ootoya), Sen Sakana is NYC’s most full-throated expression of the little-known genre. The sprawling Midtown spot (with an equally expansive menu) is sleek and spare but never austere, suffused with blonde wood, glowing blue lights and jazz pulsing from the front bar through the main dining room, all the way to the sushi counter in the back.

Sen Sakana’s best dishes refuse to sit still. The mostly small plates are laced with vigorous flavors that dance, bounce and surprise. No two bites of Nikkei ceviche ($20) are the same. The bowl of torched salmon chunks is lavished with an array of toppings that could rival 16 Handles—salty corn nuts, smoky seaweed shreds, crackling spring-roll threads and a bracing pool of yuzu leche de tigre. Salchipapas ($14) are Peruvian street food in a coat and tie, mini kurobuta sausages and creamy baby potatoes slicked with rich, sweet aji Amarillo butter, served alongside tiny squeeze bottles of bright salsa verde and pungent miso mustard. And don’t sleep on the humble empanada ($7), fluffy pastry pumped with a soul-soothing stew of minced chicken, potato and two kinds of Japanese curry.

Perfectly pleasant entrees don’t navigate the trans-Pacific partnership between Japan and Peru quite as smoothly. Oyakodon ($26), a mix of tender, soy-marinated grilled chicken thigh and rice cooked in cilantro, pumpkin and beer, skews soft and bland, even with two helpings of toasty chili oil and a raw egg yolk stirred in. Drifts of shellfish-strewn Yaki soba ($32) are panfried until crisp and chewy at once; the longer they slosh around in their heady, pepper- and dashi-infused fish stock, the better they get. Ultimately, though, the dish remains inescapably reminiscent of Chinese takeout.

So, no, not all of Sen Sakana’s cross-cultural concoctions will leave you with indelible cravings, but the liveliness of its plates shows the spot is well on its way to getting NYC hooked on Nikkei.

25% Off Bottles of Wine & Sake Mondays

Enjoy 25% off all bottles of wine and sake every Monday at Sen Sakana. Terms and Conditions: Maximum of 20 diners. Includes VAT, includes service. Valid For: 1 - 20 People Mon 11:30AM-9:45PM