A new all day restaurant in Greenpoint aims to offer a moment of serenity along with breakfast, lunch and dinner menus worth returning to.

When Sereneco restaurant opens this Thursday in Greenpoint, owner Billy Van Dolsen hopes to begin on a tranquil frequency.

After years in the hospitality industry, including as operations director of the New Jersey hospitality group where he first worked with Sereneco’s executive chef Dennis Hong (who also worked at Le Bernardin), Van Dolsen became a certified meditation instructor before signing the lease at 113 Franklin Street.

Van Dolsen earned his certification after 300 hours of coursework and multi-day silent retreats. Hence, “Sereneco,” which was designed with an eye toward calm as well.

The 70-seat corner spot is bright and airy, with a 13-seat white oak bar, high ceilings and sunshine beaming in through skylights and big windows.

Van Dolsen, a longtime area resident, first casually considered the space as a potential restaurant location in 2018 before inking his deal there last year and fashioning it for the neighborhood.

“The overall feel and what I wanted to build with the restaurant has been pretty similar [to 2018],” he says, “but to me, in my experience opening restaurants with other people, I prefer to see the space, feel the neighborhood and then kind of tailor and alter the concept and offerings, and even possibly the meal periods that you’re open based on what would be most well-received in the neighborhood.”

Van Dolsen says, for example, that locals wanted a spot that opened a little earlier than the nearby norm, so Sereneco’s take-out window opens at 7:30am. Casual sit-down breakfast and lunch will be available from 9am to 3pm, then there will be a break before dinner service begins at 5:30.

“When Dennis and I talked about what we wanted to create with the dinner menu it was to make it really approachable and to make it a place you could find something if you came multiple times a week or 5 times a month where you could find multiple things on the menu that you want,” Van Dolsen says.

“Dennis, having such a great background in fine dining, all of these dishes are really really well-composed in my opinion. And there’s a lot of attention to detail. If you read the roasted chicken [description], it's pretty clear what’s gonna be on the plate, but when you get it, it tastes special, it's presented in a special way, and it's cooked very, very well. So the idea is really to execute stuff extremely well and consistently and have stuff that’s approachable for everybody.”

Van Dolsen’s other certifications include sommelier, so Sereneco’s beverage program is largely wine-focused, spotlighting practicing organic producers with many biodynamic and natural options. Riffs on classic cocktails and a variety of gin and tonics inspired by his trips to Barcelona are also on the menu.

“I love how they craft gin and tonics and kind of the gin and tonic culture there,” Van Dolsen says. “It’s such a simple thing, but gins can have such a variety of botanicals used and there’s so many amazing tonics out there as well. Just altering what gin, what tonic, what type of garnish you use and the proportions, you can have a really different experience.”

The restaurant’s opening menu includes four G&Ts to start, like the Brooklyn Gin with Q tonic, lavender, thyme and pink peppercorns. Van Dolsen says he plans to expand this seemingly simple menu section and frequently rotate its options. With so many gin varieties and tonic brands on the market, plus all manner of possible garnishes, it would take even the most frequent regulars to make it through every possible flavor combination.

“We’re trying to keep it pretty simple, straightforward and recognizable,” he says, “but when you actually have the food or have the drink, you’re like, wow that’s really special, that’s the best version of that I’ve ever had.” 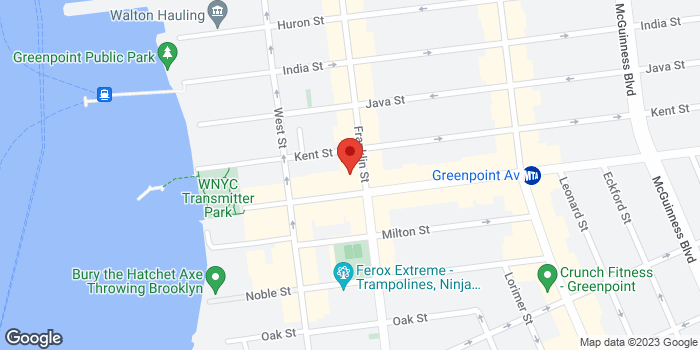