The beginning of anything—whether it's a journey, a romance or a bottle of Champagne—is often the best part. However, Sidney’s Five makes a particularly memorable impression right before you leave. The new restaurant, which opened on First Avenue in May, delivers complimentary chocolate-covered strawberries to your table as you prepare to say goodbye.

It’s darling, it's charming and it sets the tone at a key moment often overlooked in hospitality: the moment when you’re heading out the door.

There’s plenty to enjoy at Sidney’s Five before you sign the check, too. Even approaching full capacity on a Friday night—with the ten-or-so, high-back cerulean stools at its wood-topped bar, the two-tops in occasionally shifting arrangements and the big banquette that spans the back corner all populated—it still feels alive but uncrowded.

It isn’t quiet, but you can have a conversation; it isn’t rushed, but you aren’t left to languish; and it isn’t cavernous, but you can enjoy a few plates at a time, plus a martini flight ($20), without having to play table Tetris.

To be fair, the flight’s a mini, but it still takes up more space than a single tipple. Three tea-party-sized cocktail glasses are filled with two-ounce pours of batched martinis just unique enough to taste each one’s slight sweetness here or earthy undertones there. Still, most gin and vermouth dabblers would likely categorize them all as simply martinis. But the flight is darling, too—fun to sip and almost irresistible to photograph. Those resistant to whimsy might prefer a single classic option, the vesper variety or any one of the bar’s five single-serving takes (all $14).

You can only try both of Sidney Five’s standout appetizers at dinner. The fresh-shucked garlic herb charbroiled oysters ($4.50 each) are very good; fired to just the right firmness and punchy with ideally executed familiar flavors including Parmesan, pecorino, chives, parsley, dill, tarragon and fresh Thai chilies for a little heat. It's a can’t-miss dish with an approachable texture and a lovely finish that you might even introduce to the otherwise oyster-averse. It's also available during happy hour.

Meanwhile, the andouille corn dog ($15 for two) outdoes its form, encasing a vibrantly-spiced sausage in a nearly-confectionery batter blended with cornmeal, buttermilk and honey, fried to golden and served on a stick with pepper jelly and Carolina mustard for dipping. It’s a little too generously portioned to go full festive and eat off the stick, but the reference still happily lands. If you swing by a bit later, it's listed on the late-night menu as well but not available at happy hour.

The lamb burger ($23) is also good, and surprisingly easy to handle. Plenty of similarly artfully stacked burgers are as nice to look at as they are hard to hold, but this one is architecturally sound. Its blend also brings out the lamb’s deep, subtly funky notes, and it’s juicy enough without veering into novelty burger project territory.

The lamb burger tastes like (rather good!) lamb and bread. Mint jelly may be listed on the menu, but I tasted zero on the burger. Still, this dish and the fish and chips ($23), a thickly beer-battered cod with crispy potato wedges, are enticing enough to imagine returning to.

Those chocolate-covered strawberries, by the way, are chilled but not too cold to sink your teeth into, with a shell that maintains its integrity even a few bites in. They’re also $3 a pop, should you want more than your fair share, or simply to begin at the end.

The Food: Studied bar food and then some, suitable for all your disparate friend groups at once.

The Drinks: Martinis are the thing here, but other cocktails, like the vodka-based Free Britney, wine and beer are available too.

Sidney’s Five is located at 103 First Avenue and is open on Wednesday from 5pm-12am, Thursday-Saturday from 5pm-2am and Sunday 12pm-9pm. 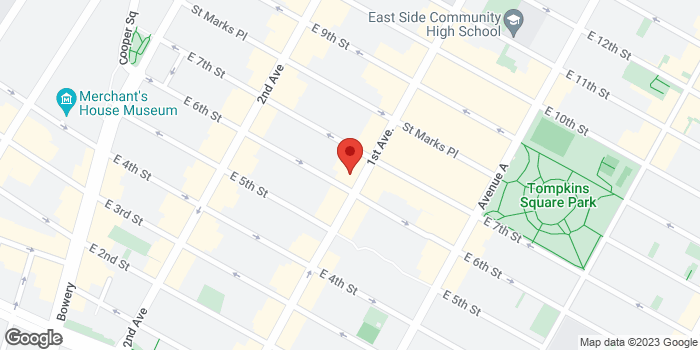