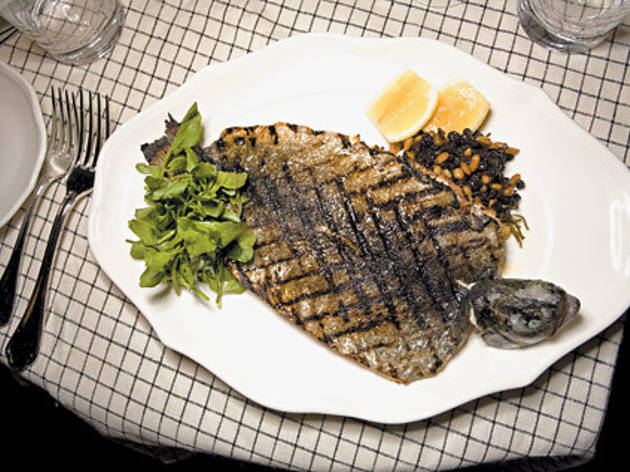 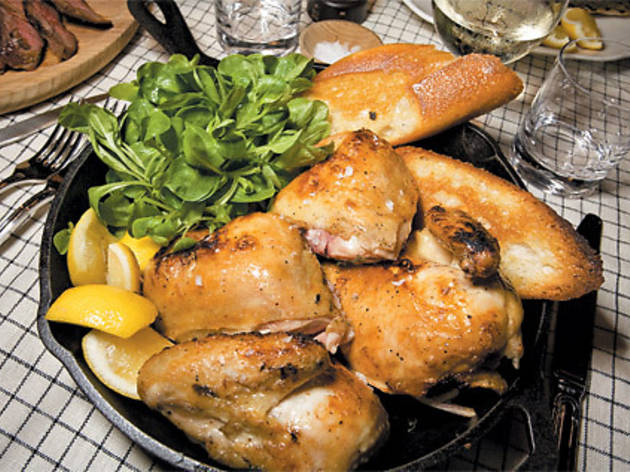 With the opening of the High Line this summer, the Meatpacking District is once again on the tips of our tongues. And hotelier Andre Balazs, who had the prescience to build his latest directly abutting the park, has been reaping the rewards of the traffic it’s bringing.

The Standard Grill, the hotel’s flagship restaurant, is the first bona fide hot spot of the neighborhood’s second coming. The place, like an Americanized Pastis, is already as jammed as Keith McNally’s still bustling brasserie. The two venues share more than a common locale. The impresarios behind them have a natural talent for building word-of-mouth buzz, opening restaurants that thrive on the illusion of exclusivity even while they pack in all comers.

The Standard, which like its neighbor serves simple, reasonably priced food in a warm, weathered setting, is drawing fashionable diners back to the neighborhood. But even more than the clientele, it’s the waitstaff who turn heads at dinner—the place seems to have been staffed by a modeling agency.

Though they may not care much about the food they whisk to the table, lucky for us Dan Silverman’s kitchen does. The chef offers a scaled-down version of the Greenmarket fare he served at Lever House, sacrificing luxury trimmings in favor of big, wholesome flavors at affordable prices.

His cooking is as comforting as the setting it’s served in—an airy room with white clapboard walls and potted ivy that gives way to a slightly more serious space under a Guastavino arched ceiling. Checked tablecloths and bread baskets fashioned from brown paper bags make dinner here feel like an urban picnic—particularly if you order family-style entres like the “Million Dollar” roasted chicken and supersized “demi-vache” rib eye.

The chicken—a whole golden bird in a cast-iron pot—comes with thick hunks of toast shamelessly slathered in schmaltz. The richly marbled steak from cult butcher Pat LaFrieda is delivered in thick slices around a brontosaurus bone with a steakhouse-caliber char. Bulked up with la carte sides—buttery sugar snaps, yellow wax beans with chorizo—either dish could quite easily feed a family of four.

Though pastry chef Frederick Aquino last worked at Spice Market, his playful, homey desserts are much more all-American than the rest of the food. Like the Ping-Pong table in the Standard’s new beer-garden annex, the classic big-kid sweets—delicious warm cookies, a flaky slice of rhubarb “humble pie,” a brownie straight from the oven with marshmallow topping—solidly capture the restaurant’s city-picnic aesthetic, and this new phase of Meatpacking chic.

Drink this: Kick things off with one of the Standard’s beautifully balanced old-fashioned cocktails—the Jackie 60 is like a potent smoky margarita (with mescal and smoked salt). A crisp chilled ros like Tavel ($33) from the reasonable wine list is the thing to drink with Dan Silverman’s bright, summery food.

Sit here: This is a big restaurant with seating options to fit every mood and time of day. In early evening when the sun’s still streaming in, the best seats are up front at the bar or at the casual lounge tables around it. Come nightfall the more atmospheric main dining room—with its tufted red leather booths—is the place to be.

Conversation piece: The restaurant’s designers, Robin Standefer and Stephen Alesch of Roman and Williams, covered the floor of the main dining room with 480,000 copper pennies.