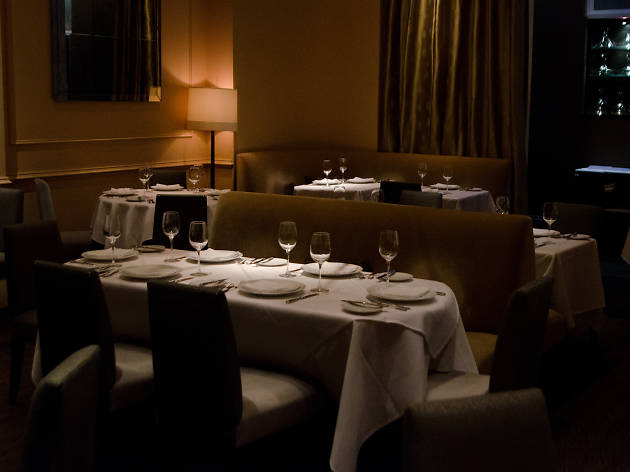 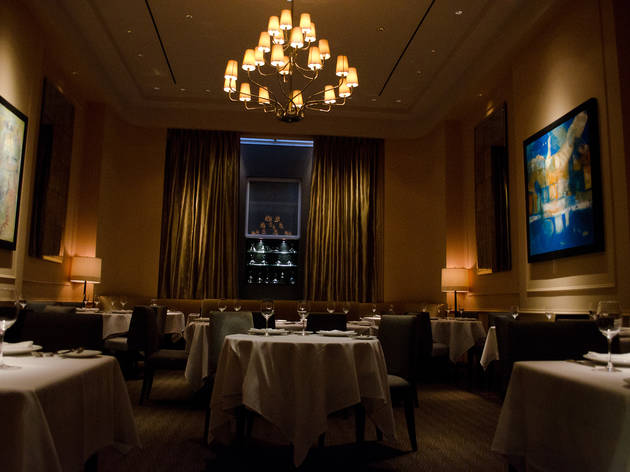 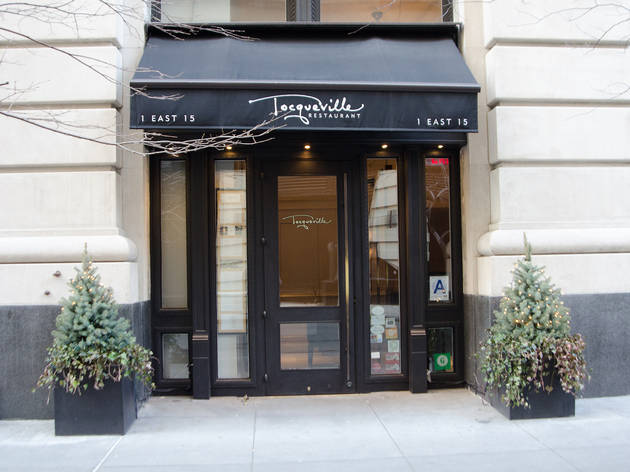 Part of the charm of the original Tocqueville, which opened in 2000, was its understatement. The 40-seat room didn’t attempt to be much more than a nice neighborhood spot, and this made the smart, fresh French-American fare all the more enjoyable. After a six-month renovation, Tocqueville recently reopened a few doors west of where it used to be, and in the process it’s turned the original proposition upside down: It is now a large, gorgeous room with a menu that doesn’t live up to the setting.

The upgrade hits you upon entry, when guests with valuables (furs, laptops) are each presented a key to their own private locker. Tocqueville now comprises three sections: a modern 20-seat bar area; a balcony for private dining; and a grand, 17-foot-high dining room with a metallic bent, featuring silver mohair upholstery, a nickel chandelier and gold floor-to-ceiling silk curtains—through which servers come and go as if in some nifty magic act.

The wizards behind those curtains are still Marco Moreira and Jo-Ann Makovitzky, the couple that parlayed a catering company into Tocqueville. He heads the kitchen and she works the front of house. Chef de cuisine George Mendes remains as well. Three or four of Tocqueville’s top dishes survived the migration too, such as the sea urchin and angel hair carbonara.

But while the formality of the room and the prices (average entrée: $32) scale new heights, many of the new dishes fall short. For instance, when Moreira drops a soft-cooked Araucana chicken egg into a Parmesan-infused chicken broth, the result should be transcendent. Unfortunately, other than the cheese and the faintest whiff of black truffles, there’s virtually no flavor. That’s not a problem with the oyster chowder, poured over three caviar-covered mollusks and chunks of applewood-smoked bacon—the soup tasted powerfully grassy, but the sweet-smoky ham was a jarring addition. Looks good on paper, doesn’t work in the bowl.

Moreira’s got the right idea when he brings sweetness into otherwise savory dishes. The house-cured pressed terrine of duck foie gras needed something besides a stack of brioche toast points, and the pickled fig compote was an inspired accompaniment. Chunks of blood orange, however, did not especially enhance the Portuguese sardines.

The entrées fell into the same trap: okay protein meets high-concept, low-impact side on a beautifully plated dish. For example, the small serving of roasted suckling pig (a half-dozen pieces of pork, including one unappetizing all-fat morsel and a few crunchy cracklings) shared a plate with miserably bitter pureed collard greens and toasted farofa, a mound of flour that resembled bread crumbs.

While the food is inconsistent, there’s a lot to like here. The wide-ranging wine list includes many good boutique bottles at reasonable prices. The kitchen sends out free tastes. And the desserts, by pastry chef Ryan Butler from Park Avenue Café, seem strong. I especially liked a caramel-apple tart, sliced wafer thin and piled over a walnut linzer torte.

The service, though, needs work. Everyone was friendly, but the waitstaff never explained the dishes when they arrived or refilled water glasses unless asked. The formality was there, but the soul that made Tocqueville an almost too-good-to-be-true find had vanished. Moreira and Makovitzky plan to open a Japanese restaurant in Tocqueville’s original space. I’m hoping it’ll be a small, unassuming place.