What does it take to get noticed in this town? If you’re a novice restaurateur, networking your way into the spotlight is a great way to begin. Danae Cappelletto, a fashionable young Australian, scored a profile last year in The New York Observer, when her Nolita restaurant was still a dream.

Travertine finally opened this fall after a bureaucratic ordeal (the community board offered its grudging support, having opposed three earlier venues planned for the space). The place, like its owner, has lofty ambitions—and a yen for attention. Cappelletto, who has experience running nightclubs and restaurants in Sydney, has opened a neighborhood spot with a velvet-rope sensibility.

The polished travertine slabs from which the restaurant takes its name cover the walls inside and out—and are the dramatic foundation for the dark and opulent club-style decor. Although the space is small, design tricks create the illusion of vastness, with curtains in one corner wrapping the ceiling like a bedouin’s tent; an enormous black-crystal chandelier over the stairs to the basement; and leather banquettes so huge, you may need a booster seat to reach the table.

While Cappelletto, a charming host who works the door nightly, didn’t team up with a celebrity chef, she snagged what may be a more appropriate fit—a striver who shares her spotlight aspirations. Manuel Trevino, a soft-spoken contender from season four of Top Chef (he was axed early on), signed on as head toque after losing his post running the midtown Dos Caminos. A veteran of the Mario Batali machine, he’s devised an upmarket Mediterranean menu that’s grounded mostly in Italy. Capitalizing on his 15 minutes, he works the dining room like the star he aims to be.

While so many restaurants these days are scaling back on propriety, Travertine amps it up. A waiter in a quirky bow tie (more Alex P. Keaton than Jeeves) delivers an amuse-bouche (silky butternut squash soup) to begin and petits four (house-made truffles) to finish. Trevino has exacting aesthetics that are aligned with this brand of pretense; though the food’s pretty simple, his presentations are intricate. In one starter, two perfect triangles of pig’s-head terrine are precisely shingled beside hunks of grilled country bread and assertive condiments (pickled fennel, pickled cipollini, watermelon-rind mostarda) in precious bundles. Supremely tender calamari bellies, expertly seared on the plancha in another fine starter, are scored with such exacting crosshatching, there may well be a food stylist in the kitchen.

Service is attentive, if a bit overzealous. An up-selling waitress one night urged an excessive pasta midcourse. While fresh garganelli with shiitakes, brussels sprouts and an extra-rich brown-butter sauce is one of the menu’s high points, Trevino’s riff on linguine with clams is a disconnect from the rest of the food, with gritty cockles and chewy pancetta in a standard-issue tomato rag.

Entres are so generously portioned, you’ll regret sopping up that brown-butter sauce. Tender quails, marinated in balsamic and quickly grilled, are splayed on top of each other like an avian napoleon, with mascarpone-and-mushroom polenta underneath. Monkfish tail, roasted then sliced thick, is technically flawless, with delicious red cabbage braised with apples and guanciale. Pork loin, rubbed with porcini powder and cooked just the right shade of pink, is served with white beans and wisps of fried artichoke.

One night, as we tackled a pair of impressive desserts—steamed sweet-corn budino as light as souffl, plum crostata with a fine flaky crust—a DJ took up residence near the dining room. The bar was packed, and it seemed as if the place might shift from restaurant to nightclub. But, instead of amping up the beats, he maintained the ambient soundtrack that had been the backdrop all night. Travertine may look like a nocturnal hot spot, but at prime dinner hour it’s (thankfully) a restaurant first.

Drink this: The one-page wine list features a bottle or two in every price point. The least pricey red on the list, a primitivo from Piana del Sole ($45), is a lush and rustic choice.

Sit here: Avoid the uncomfortable banquettes and request a secluded corner spot under the canopy.

Conversation piece: The namesake building material featured at the restaurant is like a cross between marble and limestone. Popular among architects both modern and ancient, it was used for both the Colosseum in Rome and the Getty Center in L.A. 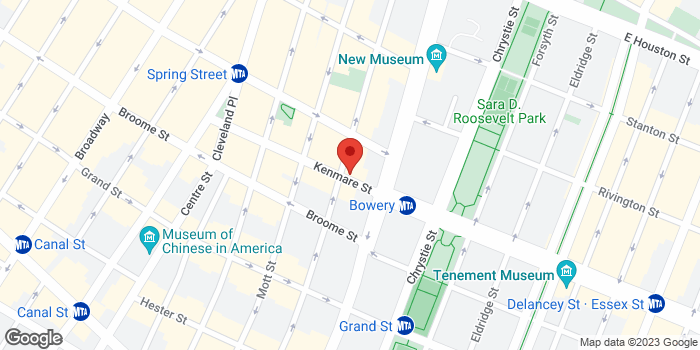