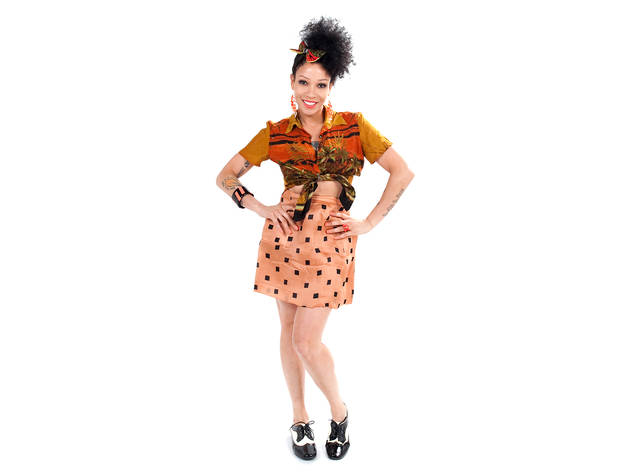 1/16
Photograph: Anna Simonak&ldquo;I call this look Williamsburg Safari,&rdquo; says Coppola of her Mischen skirt (mischenclothing.com), lent to her by designer and stylist Carla Knapp (carlaknapp.com) and paired with a Caribou New York button-up shirt from Beacon&rsquo;s Closet. &ldquo;I think the palm trees bring the perfect amount of cheesiness to the outfit,&rdquo; she notes. &ldquo;It&rsquo;s all in the irony. I learned that one time when I went to Williamsburg.&rdquo; 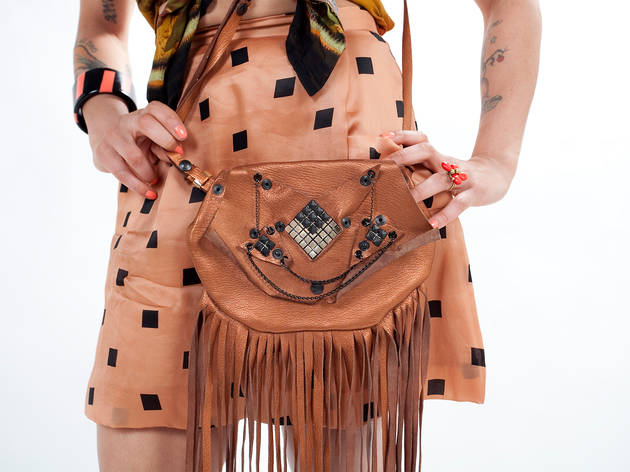 2/16
Photograph: Anna SimonakCoppola became friends with Junkprints designer Chanel Kennebrew, who made this fringed purse, through yoga class at Sacred Yoga (197 Clifton Pl between Bedford and Franklin Aves, Bedford-Stuyvesant, Brooklyn; 347-715-4112, sacredbrooklyn.com). &ldquo;We have a nice little community thing happening there,&rdquo; she says. A coral ring handmade by a street vendor on Patong Beach in Phuket, Thailand, complements Coppola&rsquo;s peachy Essie polish in Tart Deco. &ldquo;I&rsquo;m not really a pink girl&mdash;it just looks silly on me,&rdquo; she explains. &ldquo;But I&rsquo;m still a girl, and sometimes feel flowery. When I want my nails to reflect that feeling, I go for this color.&rdquo; 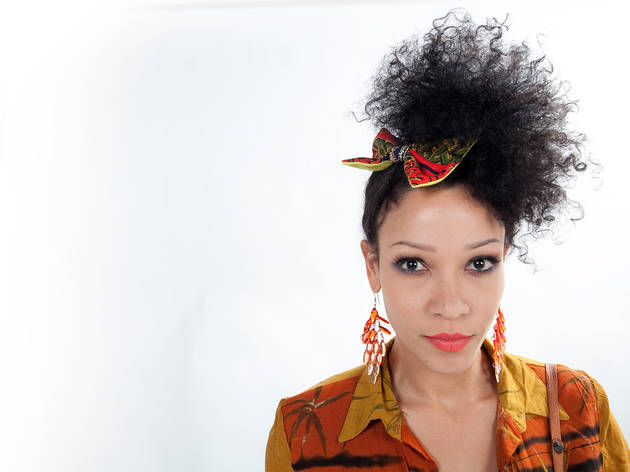 3/16
Photograph: Anna Simonak&ldquo;I love how they look like carrot chandeliers,&rdquo; muses Coppola of her H&amp;M earrings. She wears an American Apparel (locations throughout the city; visit americanapparel.net) hair bow for added quirkiness. &ldquo;It&rsquo;s so Yo! MTV Raps,&rdquo; she jokes. &ldquo;My favorite thing about fashion repeating itself historically is if you missed it the first time, there&rsquo;s always 20 years later.&rdquo; MAC lipstick in Vegas Volt ties in to the ensemble&rsquo;s coral color scheme. &ldquo;It&rsquo;s bright yet soft, and goes well with my complexion,&rdquo; enthuses Coppola. 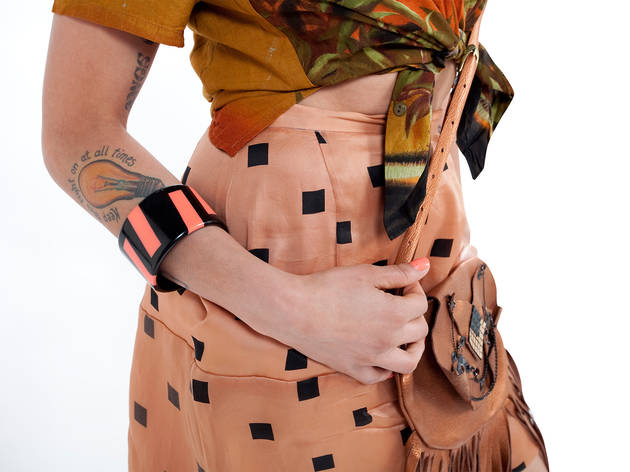 4/16
Photograph: Anna SimonakA tattoo depicting a lightbulb, which Coppola says is meant to serve as &ldquo;a little note to self to be awake, be inspired and shine on,&rdquo; peeks out from under a Forever 21 (locations throughout the city; visit forever21.com) bangle. 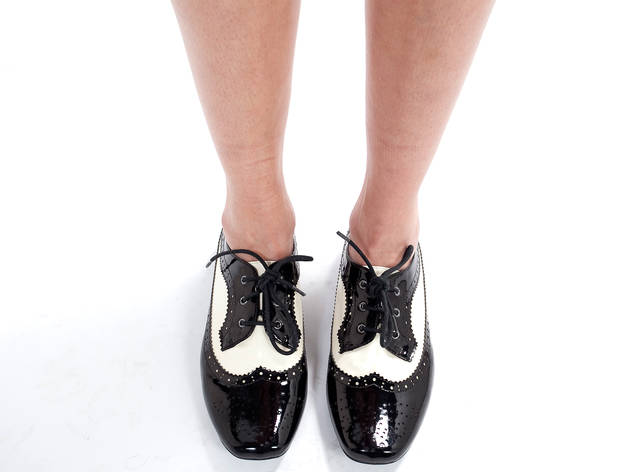 5/16
Photograph: Anna SimonakCoppola purchased these patent-leather oxfords from Topshop (478 Broadway between Broome and Grand Sts; 212-966-9555, topshop.com) for a video shoot. &ldquo;I get a lot of &lsquo;nice shoes!&rsquo; when I wear them,&rdquo; she says. 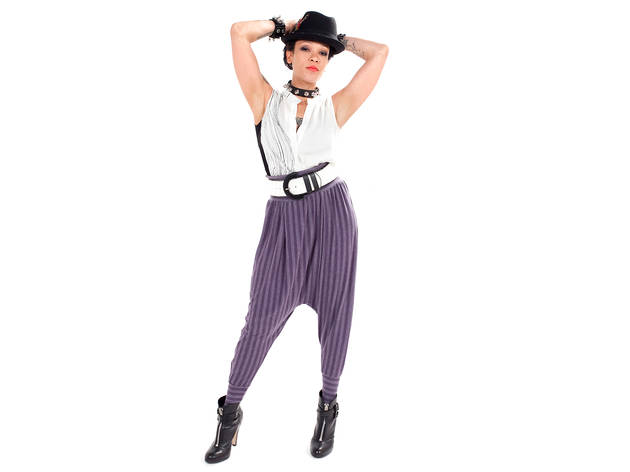 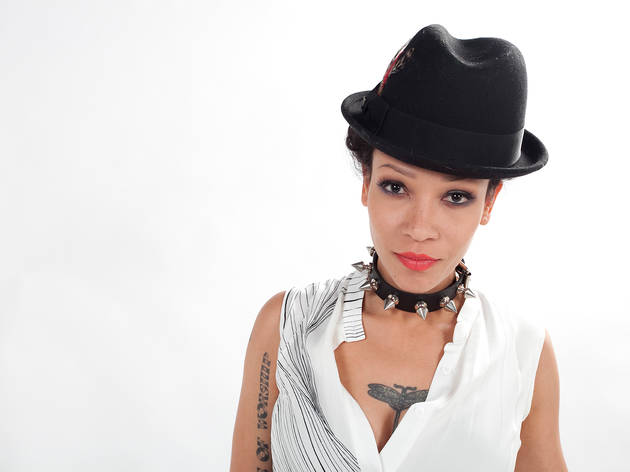 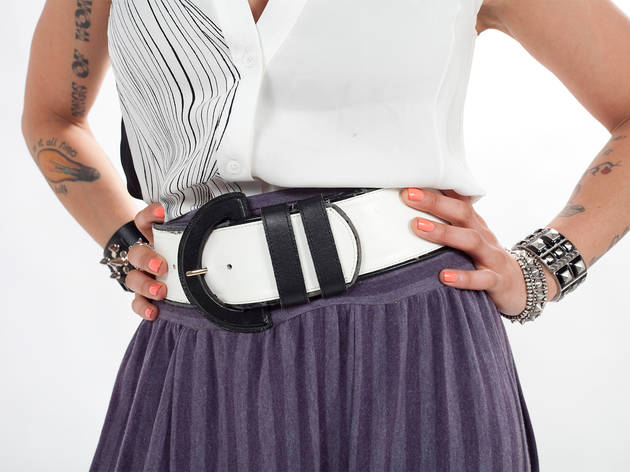 8/16
Photograph: Anna SimonakCoppola defines her waist with a wide belt scored at her local Goodwill. The pyramid-stud cuffs are the result of a recent Forever 21 accessories binge. &ldquo;It happens,&rdquo; she admits. 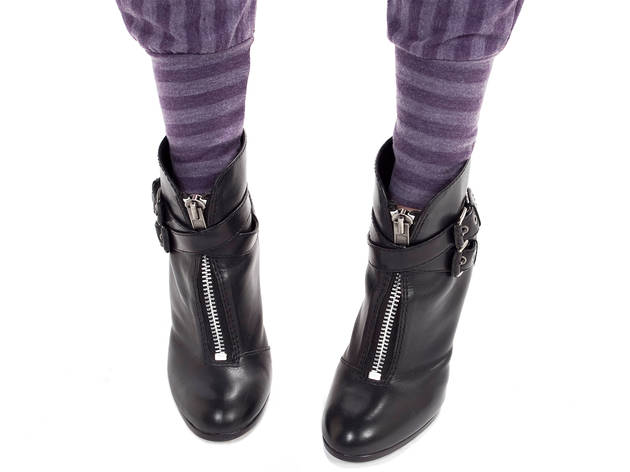 9/16
Photograph: Anna Simonak&ldquo;I got these when I first discovered Topshop in London a few years back,&rdquo; recalls Coppola of her zippered booties. &ldquo;They rock, but they&rsquo;re not ideal for rocking out in&mdash;there&rsquo;s very little ankle support.&rdquo; 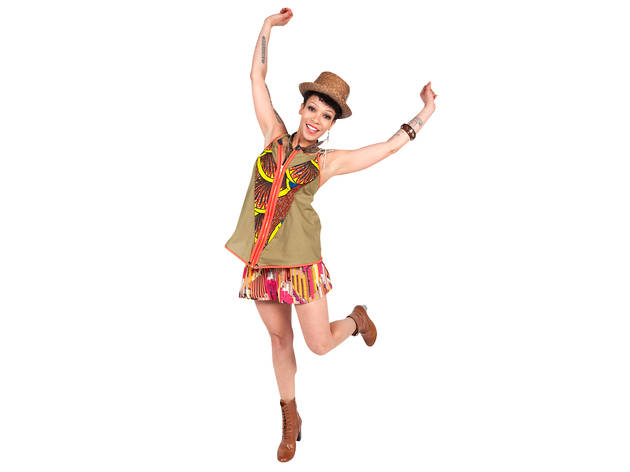 10/16
Photograph: Anna Simonak&ldquo;I like to mix patterns a lot and push color combinations to the limits,&rdquo; says Coppola, who does just that by pairing Forever 21 vibrant printed shorts with a Junkprints blouse. &ldquo;It&rsquo;s roomy, ventilated, bright and interesting,&rdquo; she enthuses. &ldquo;Perfect for a sunny day spent at the Prospect Park Bandshell celebrating Brooklyn.&rdquo; 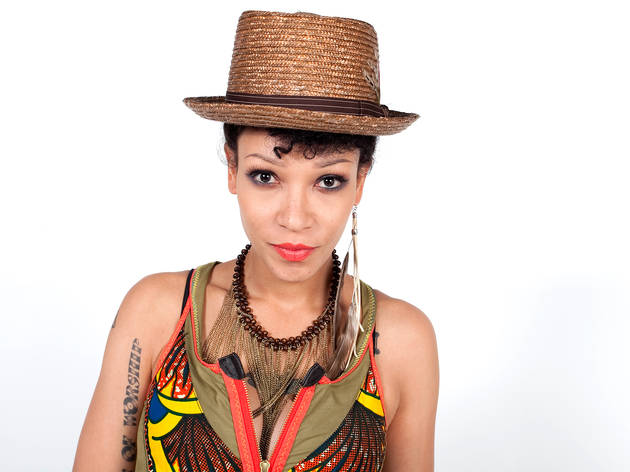 11/16
Photograph: Anna SimonakBoth Coppola&rsquo;s fringe necklace and straw hat are from Ricky&rsquo;s (locations throughout the city; visit rickysnyc.com). &ldquo;When I just want to make my hair disappear, I go for the straw hat,&rdquo; she explains. A dangling feather earring from Urban Outfitters amps up the boho vibe. 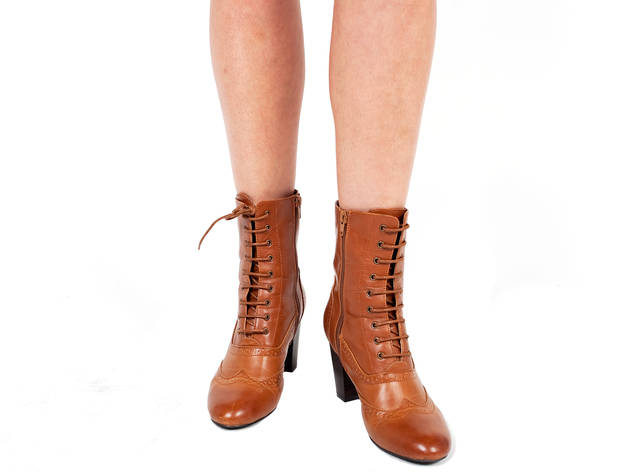 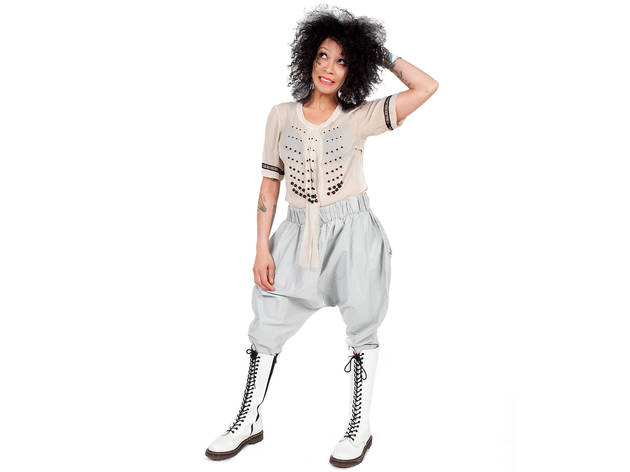 13/16
Photograph: Anna SimonakCoppola pairs a sheer, feminine Mischen blouse with funky Junkprints harem pants for a look she&rsquo;s dubbed Space Whimsy. &ldquo;The bottom half of me looks like I&rsquo;m about to take out the garbage at the space station,&rdquo; she jokes. &ldquo;I like to mix characters and fuck with the minds of passengers on the C train.&rdquo; 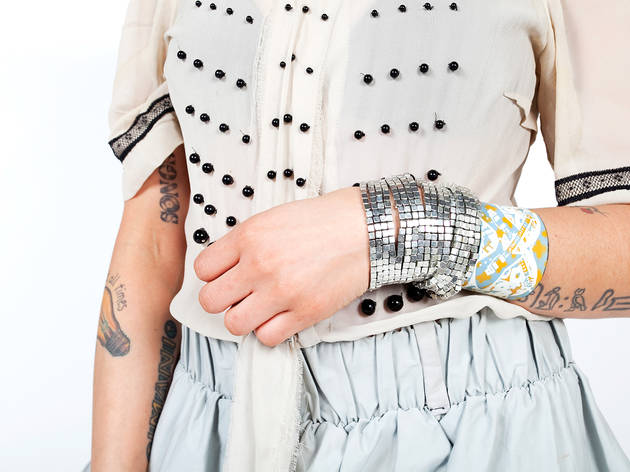 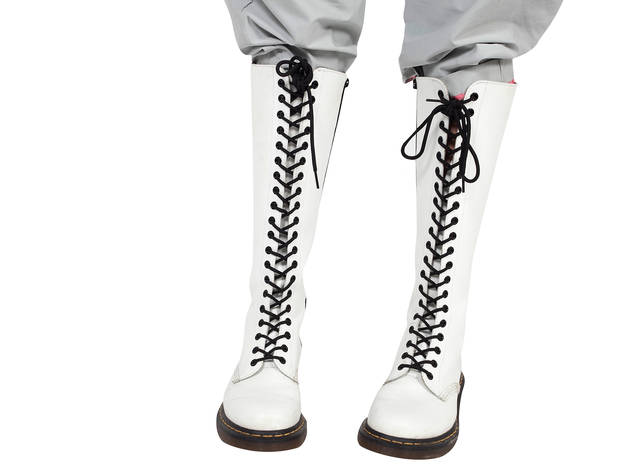 15/16
Photograph: Anna Simonak&ldquo;These white Dr. Martens (148 Spring St between West Broadway and Wooster Sts; 212-226-8500, drmartens.com) are uncommon, and they look fantastic in the snow,&rdquo; enthuses Coppola, who purchased them online years ago, when the boots weren&rsquo;t quite so mainstream. 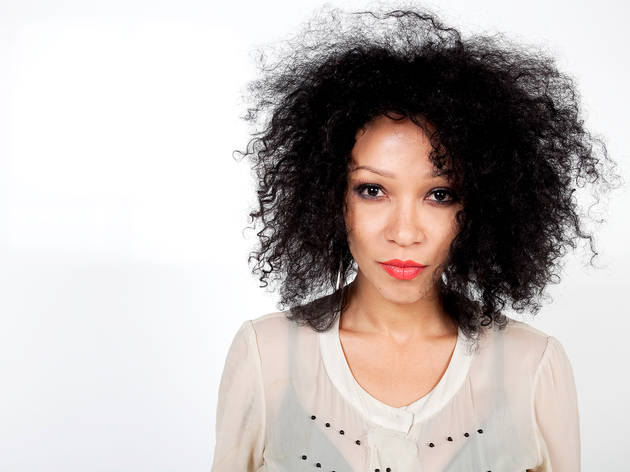 16/16
Photograph: Anna Simonak&ldquo;My hair cuts itself,&rdquo; declares Coppola. &ldquo;I do a lot of hot yoga, and my hair tends to get dry and break off&mdash;probably because I chemically treated it so much in the past. Last year, I decided I would stop dying it. Now it&rsquo;s just a black blob on my head.&rdquo;
Advertising
Imani Coppola, the lead singer of Little Jackie and owner of Plush Moon Records, models her funky, bohemian threads and shows off what makes her one of the most stylish New Yorkers. The risk-taker loves shopping at Beacon's Closet and Callalilai for comfortable yet statement-making clothes.

Her personal style: “Afro-punk, pagan funk, crazy Buddha. It’s colorful, bold and carefree. As a singer, I get to wear whatever I want, whenever! I’m currently making a solo record and I like to look like Andy Warhol on mix days. In general, I like to wear friendly and approachable looks, but always paired with a fuck-you element. I’m a New Yorker—I need attention, but I also need my space.”

Her inspirations: “Art in the 21st century, Brooklyn, music, nature and sleep deprivation.”

Favorite stores: “I love the atmosphere at Beacon’s Closet (92 Fifth Ave at Warren St, Park Slope, Brooklyn; 718-230-1630 • 88 North 11th St between Berry St and Wythe Ave, Williamsburg, Brooklyn; 718-486-0816 • 10 W 13th St between Fifth and Sixth Aves, 917-261-4863 • beaconscloset.com). I love how everything is organized by color and I love the music they play. I am often driven out of clothing stores in a cold sweat with my heart palpitating because of the music. This doesn’t happen at Beacon’s Closet. Music is important; the right music really helps you get into the zone you need to be in to get the right looks for yourself. I get a little nostalgic when I go to Goodwill (1100 Fulton St between Classon and Franklin Aves, Bedford-Stuyvesant, Brooklyn; 718-789-0856) in Bed-Stuy. When I was growing up, we shopped in thrift stores because we couldn’t afford to shop elsewhere. It was embarrassing for me then, but now it’s like a source of pride. There are so many incredibly unique items you can find in a secondhand store. I almost always leave feeling like I just won the fashion lottery. Sometimes I like to wear clothes that make me feel like a spiritual leader, and the items from Callalilai (827 Broadway between 12th and 13th Sts, 212-477-7377 • 43 Spring St between Mott and Mulberry Sts, 212-334-2188 • 296 Atlantic Ave between Hoyt and Smith Sts, Cobble Hill, Brooklyn; 718-875-1790 • callalilai.com) give me that feeling of spiritual togetherness. The tribal patterns and earth tones just make me feel one with it all. The store also carries Aoyama Itchome, who is one of my favorite designers and makes very loose-fitting, comfortable yet beautiful clothing. Om.”

Favorite salons: “I go to Creative Hair Spa (326 9th St between Fifth and Sixth Aves, Park Slope, Brooklyn; 718-788-8796, creativehairspa1.com) for facials and massages. It’s a utility spa—very basic. The prices are reasonable and they don’t give me shit for same-day appointments. I also just discovered D’mai Urban Spa (157 Fifth Ave between Lincoln and St. Johns Pls, Park Slope, Brooklyn; 718-398-2100, dmaiurbanspa.com), which is soon to be my new favorite. It’s fancy-pants. I go there when I want to feel like I’m at a spa in the Virgin Islands. Once you step inside, you won’t feel like you’re in Brooklyn anymore, which is the whole point.”

Her signature garment: “Harem pants. Not the best bottoms for bike riding, but so very comfortable. I live in the ’hood, and although it’s sometimes nice to be admired from behind, it’s also nice to know your ass is covered on the days you just don’t feel like being some passing stranger’s sexual fantasy.”

How she describes New York style: “It’s a celebration of self. It’s freedom of expression.”

How her style has evolved: “I first moved to Manhattan when I got a record deal at 18—I was still a kid. I just wanted to play with color and sparkle makeup, snort Pixy Stix and create wacky characters. I used to look like a cross between Rainbow Brite and Punky Brewster in a fluorescent Ricky’s wig paired with bright-green fairy wings and clown shoes. I was cuckoo pants, didn’t give a fuck and loved it. But then something changed in me as I lived in the city longer: This concept of looking ‘cool’ grew on me. It’s interesting; nowadays it seems as if we’re back to where the ’90s wanted to go—be as outrageous as you can possibly appear to be, but I did that already. Now I like to outrage through the medium of my music and look cool while I’m doing it.”