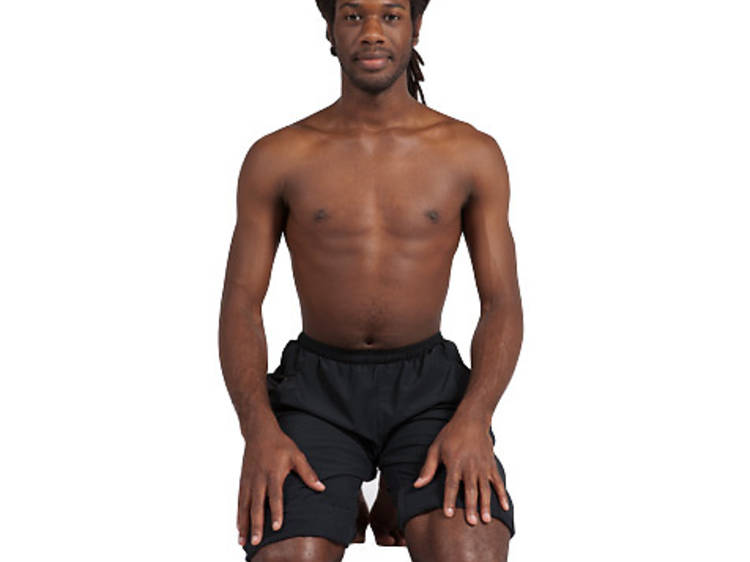 How did you become a yogi?
When I was 11, I was put into an ashtanga-based yoga class as a kind of funny punishment. I got really close with the teacher, and I just never stopped. I haven't missed a day since. I do Pilates occasionally, and I used to dance and do Gyrotonics, but yoga combines the fitness elements of all of those [activities].

What's your current practice like?
I do ashtanga yoga every morning, then I may also do an Iyengar class later. There are some days I'm not in the mood to go to the studio, so I'll do a home practice, which might consist of half an ashtanga series or a few poses and some chanting.

How has yoga affected your diet?
I've always eaten healthy, [though] I would be quick to define healthy. I was born and raised in New Orleans, Louisiana, and as such, I ate New Orleans cuisine. Contrary to reputation, [I ate] an extremely balanced diet and [the food was] always well prepared. Upon moving up north, my diet shifted to reflect the changed environment. [Since I started doing yoga,] I don't eat as frequently. I get up absurdly early in the morning—anywhere between 4:30am and 6:30am, and I don't eat until 11am or noon, because it's not recommended that you eat before yoga practice. I'll have a smoothie that I make home—usually banana or spirulina. I'm also a big devotee of soy yogurt.

What's the biggest payoff?
Ashtanga is a very vigorous form [of yoga], so my cardio rates are better than they've ever been. When you throw yourself into a handstand, your muscles are in a state of focus. It's almost like Olympic training. My abs and every part of my body are just really toned and taut from the experience of controlling muscles. But the best benefit of yoga is that it brings a kind of clarity to your mind. I'm a better student, a better boyfriend, a better employee. 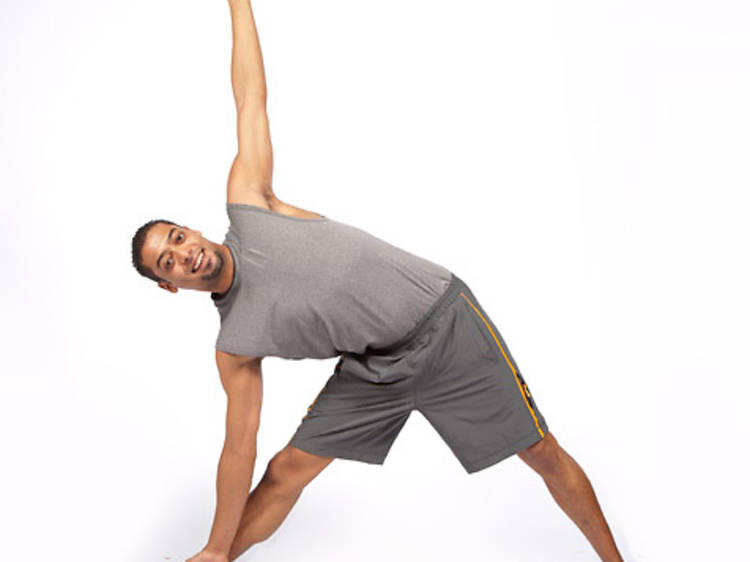 How did you become a yogi?
I first got into yoga in 2007 because of my wife. I have a big track-and-field background and I played football, but the first yoga class I took was tough. I immediately fell in love with the challenge. When I had to have my thyroid removed, I was really weak and tired after the operation, and yoga was the best rehab and recovery for me.

What's your current practice like?
I mainly do Hot Power Vinyasa. I love the benefits of the detoxification and sweating [plus] the workout you get in a hot room. I try to practice at least five nights a week.

How has yoga affected your diet?
I don't even want to drink because I just feel so clean and good. [You do] so much good for your body that you don't want to damage it. I still love meat, but now I'm all about eating raw, clean foods.

What's the biggest payoff?
Yoga calms your mind and your body, and you feel better about yourself. I've always been in good shape, but it's amazing how much I've strengthened my core, my abs, my butt and my shoulders. It gives shape to every muscle in your body.
Advertising 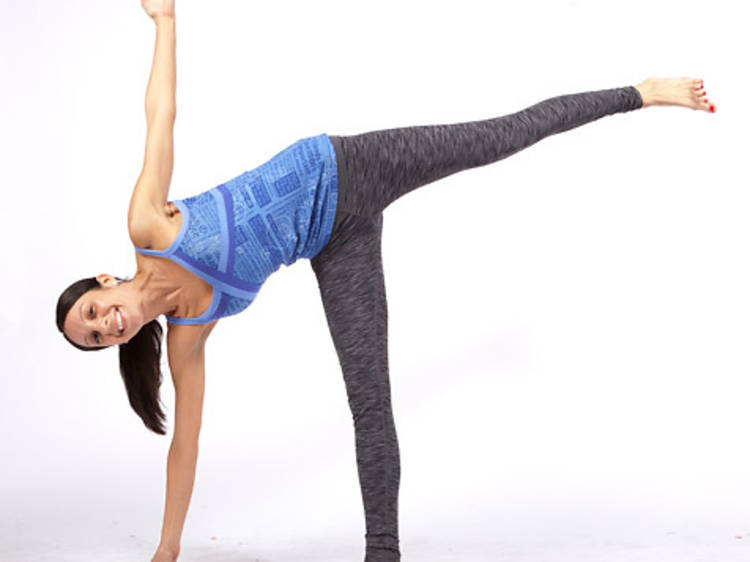 How did you become a yogi?
A few years ago, my work started offering a weekly class, and I loved it. Then Pure Yoga East (203 E 86th St between Second and Third Aves; 212-360-1888,pureyoga.com) opened in our neighborhood, and I've been practicing there ever since. I played sports in high school, and in college I ran and lifted weights, but I never achieved the physical results that I do with yoga.

What's your current practice like?
I mostly take Hot Power Vinyasa classes. My job is pretty stressful, and after sitting in front of the computer for nine hours, yoga makes me feel so much better. It puts things in perspective.

How has yoga affected your diet?
I've always been interested in eating healthy and organic foods, but now I'm more conscious of it. I eat fish and chicken, but no red meat or pork.

What's the biggest payoff?
I'm pretty petite, but yoga has made me stronger. I'm the same size, yet my clothes fit me better. When I first started practicing, I couldn't even stand on one leg. Now I can do crazy things with my body. 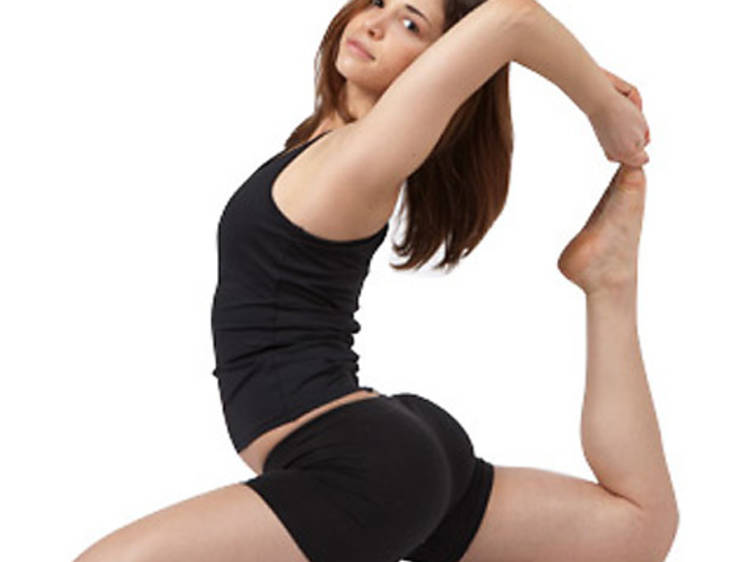 How did you become a yogi?
I discovered Bikram yoga about a year ago for egotistical reasons. I was looking for a way to shed the 15 pounds I'd gained since coming to New York City. At the time, I was really depressed, smoking a pack a day, drinking every night. I lost all the weight, and I started to feel these emotional changes. I just got obsessed with it. I decided to do teacher's training this summer, and it changed my entire life.

What's your current practice like?
I practice every day, usually alternating between classes at Jivamukti Yoga Center (841 Broadway between 13th and 14th Sts, second floor; 212-353-0214, jivamuktiyoga.com)and the Vinyasa Flow classes at Yoga Vida NYC (99 University Pl at E 12th St, sixth floor; 212-995-5553, yogavidanyc.com). If I get worn out or my muscles start to hurt, I try to remember what one of my teachers told me: The days that you don't feel like doing yoga are the days that you need it the most.

How has yoga affected your diet?
I used to be predominantly vegetarian, but now I'm totally raw vegan. I got really into live-food nutrition and superfoods.

What's the biggest payoff?
I used to have horrible posture; I was always slouching. My Russian relatives were always smacking me on the back and telling me to stand up straight. Through practicing so much, my body became realigned and my posture has changed. I'm also not on any medications and have stopped smoking and drinking.
Advertising 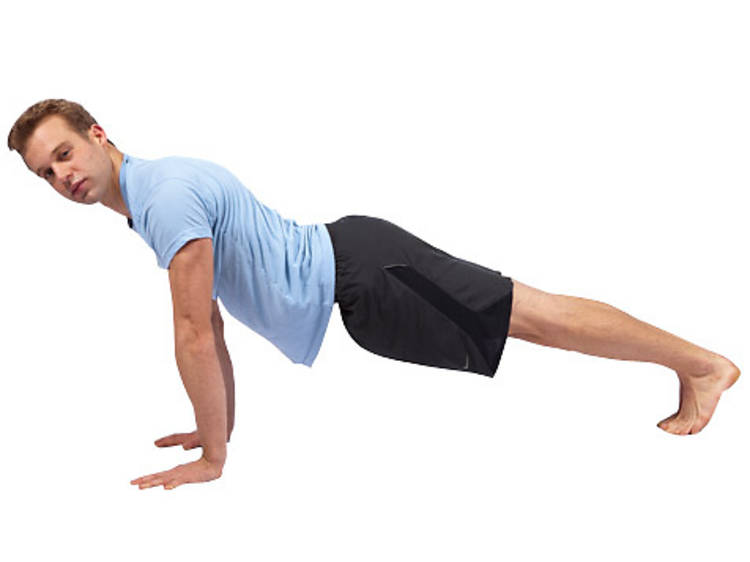 How did you become a yogi?
I tried yoga about four years ago as a way to [exercise], but my experience with yoga has been so much more than that. When I was laid off from Bear Stearns, I started going a few times a week, which turned into every day. It was a constructive way to fill the long days while I looked for another finance gig, and it helped me stay positive during 18 months of unemployment. It had such a profound effect on me that I actually ended up opening a yoga studio almost a year ago.

What's your current practice like?
I'm still a student in every sense of the word. I do 13 or 14 classes a week. I've gotten into the habit of doing yoga in the morning and then again in the evening to unwind.

How has yoga affected your diet?
I still like to eat a nice steak with a bunch of friends, drink wine and let loose, but I'm now more aware of how I feel as the result of what I put into my body. I've started to eat less meat because of the way I feel afterwards, and I prefer eating grains, rice and vegetables. I used to drink just because it was fun and social, and I still do it, but yoga has helped me develop a bit more of a balance.

What's the biggest payoff?
I played ice hockey in college, so I always ran and lifted weights with the goal of being a jacked athlete. But yoga changed my whole perception of what fitness is, and I'm now in the best shape of my life. I have more body control and awareness after four years of yoga than I did after 20 years of regular athletic training. The only reason I didn't try it before was because of some preconceived notions—I think it sometimes gets a bad rap—like all you do is try to touch your toes for an hour, chant and get a little weird. 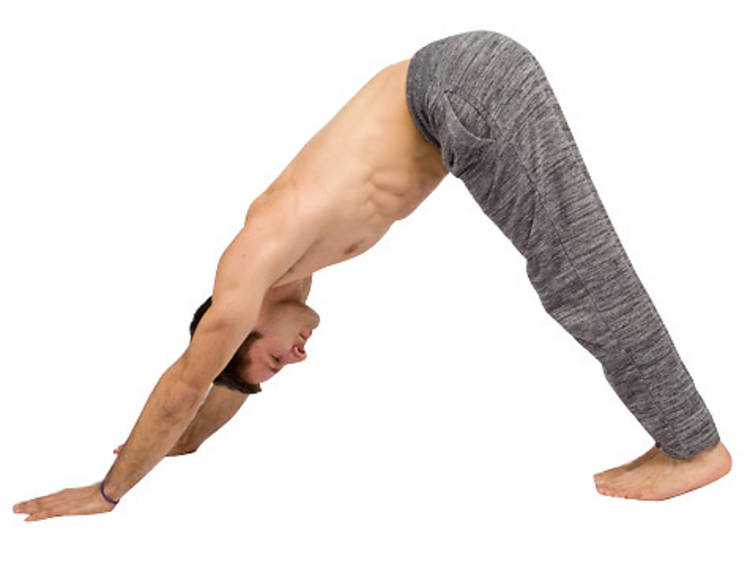 How did you become a yogi?
I'm a freelance dancer, so I have worked with my body my whole life, but I started yoga about a year and a half ago to help me focus my energy. I wanted to learn how to breathe properly.

What's your current practice like?
I do vinyasa or vinyasa-hatha yoga daily, sometimes two or three times a day.

How has yoga affected your diet?
I have always been healthy, but now I am even more conscious about eating organic. My diet consists of a lot of fruits (like goji berries), nuts, legumes, fish and green tea—and always a lot of water. When I eat good, fresh foods, I feel much better. I still like to drink red wine, but I go out much less than I used to.

What's the biggest payoff?
The best physical benefit is the ability to breathe properly. You open a space in your body that was closed before, and you can feel the expansion. Yoga has also helped me get stronger and be sturdier—in dance and in life. Now I have more compassion, more understanding, more patience.