From the 1960s through the early 1980s, at the height of his long career, Neil Diamond shone very brightly indeed. As A Beautiful Noise, the jukebox biomusical based on his life, takes pains to inform us early on, he has had dozens of top-40 hits, and sold 120 million albums. “Biggest box office draw in the world, ahead of Elvis Presley, can you imagine? The King,” Diamond marvels later on. The Brooklyn-born singer-songwriter-showman was sometimes called the Jewish Elvis, and in that regard A Beautiful Noise is a suitable tribute to him; in its biggest numbers it resembles an old-school Vegas-style impersonation show, recreating concert moments for the benefit of an audience that is happy to embark on a musical nostalgia trip.

A Beautiful Noise extracts as many pop gems as it can from the Diamond mine. From his early breakthrough as the writer of “I’m a Believer” for the Monkees to more than two dozen of his later hits (such as “Cracklin’ Rosie,” “Song Sung Blue” and “America,” though perhaps understandably not “Girl, You’ll Be a Woman Soon”), the show makes its subject’s oeuvre the central focus of attraction and investigation. His most enduring hit, “Sweet Caroline,” is prominently featured as both the Act I finale—when Diamond describes it as a visit from God himself, and Michael Mayer’s staging obliges with a chorus of dancers in gleaming white, à la Jesus Christ Superstar—and in a final send-’em-out-humming reprise after the curtain call, at which the audience is encouraged to chant in response (“So good! So good! So good!”) as though at a sporting event. 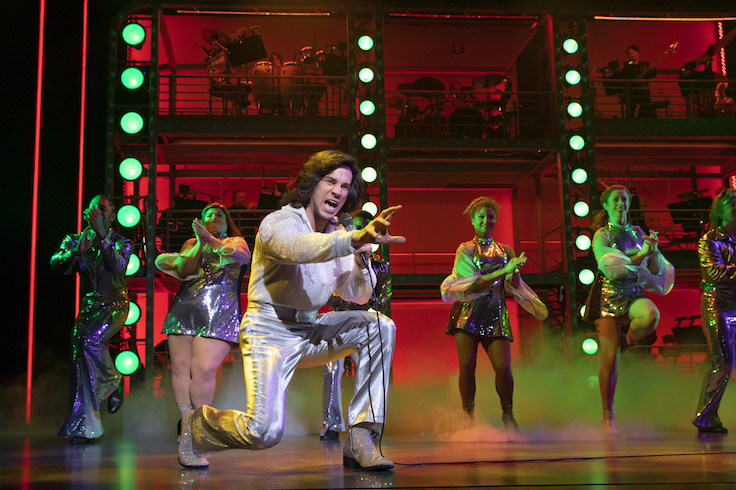 But book writer Anthony McCarten, a specialist in biodrama—he wrote the screenplays for The Theory of Everything and Bohemian Rhapsody, and his Warhol-Basquiat play The Collaboration is also opening on Broadway this month—is not content to “Cherry, Cherry”–pick his way through the catalog. Instead, his setting gives us a pair of Diamonds. The younger one is played with brio by Will Swenson, in many sequined outfits and glossy wigs, reproducing the punchy baritone that Diamond’s early champion and fellow songwriter Ellie Greenwich (a zesty Bri Sudia) describes as “Gravel wrapped in velvet…Like you just woke up and tripped over an ashtray.” Meanwhile, in alternating scenes, a much older Diamond is played by an achingly surly Mark Jacoby. Reluctantly visiting a psychotherapist (Linda Powell) to placate his third wife, he seems closed-off and broken; Parkinson’s Disease having rendered him unable to perform, he is undergoing an identity crisis that he refuses to identify. This is a smart approach, and an ambitiously dark one: Diamond’s rise to riches and fame is always shadowed by the chagrin of his later self, who watches from the sidelines as though in a reverse production of Follies.

Nearly all of the songs are performed diegetically, which is to say as Neil Diamond songs performed by Neil Diamond within the world of the narrative: auditioning at the Brill Building, starting out at the seminal West Village talent incubator the Bitter End, taking the stage in major venues. The few occasions when they are treated as musical-theater character songs tend to be in the service of giving his ex-wives something to sing: high-school sweetheart Jaye (Jessie Fisher) gets “Love on the Rocks,” and the more assertive Marcia (Robyn Hurder) gets “Forever in Blue Jeans”—an audience favorite, thanks to Hurder’s rockin’ combination of dance and belt—as well as the inevitable “You Don’t Bring Me Flowers” when things fall apart. The production numbers are buttressed by Emilio Sosa’s flashy costumes and Stephen Hoggett’s groovy, springy choreography, and the ensemble is well-served throughout: Star dancers like Jess LeProtto have moments to pop, and Jordan Dobson gets a prettily sung solo number. And there are hints throughout of Diamond’s struggles with a depression he calls “clouds,” and that he is essentially, as one of his catchiest songs suggests, a “Solitary Man.”

Yet the musical reserves its main character arc for the older Diamond, culminating in a “Being Alive”–style 11-o’clock breakthrough number that, though delivered strongly by Jacoby, is unfortunately one of Diamond’s weakest efforts: bombastic and stilted, it can’t provide the moment with the spine it needs. In the end, A Beautiful Noise can’t overcome the central challenge of being a Neil Diamond biomusical, which is that Diamond’s life has not been, in and of itself, especially dramatic. (The Gloria Estefan musical On Your Feet! had the same problem.) His first two marriages failed, but in drifts and not crashes; an association with mob-linked record executives (Michael McCormick and Tom Alan Robbins) is quickly overcome. The therapeutic framing notwithstanding, what we get here is less a story than a retrospective sequence of events, or perhaps events of sequins. 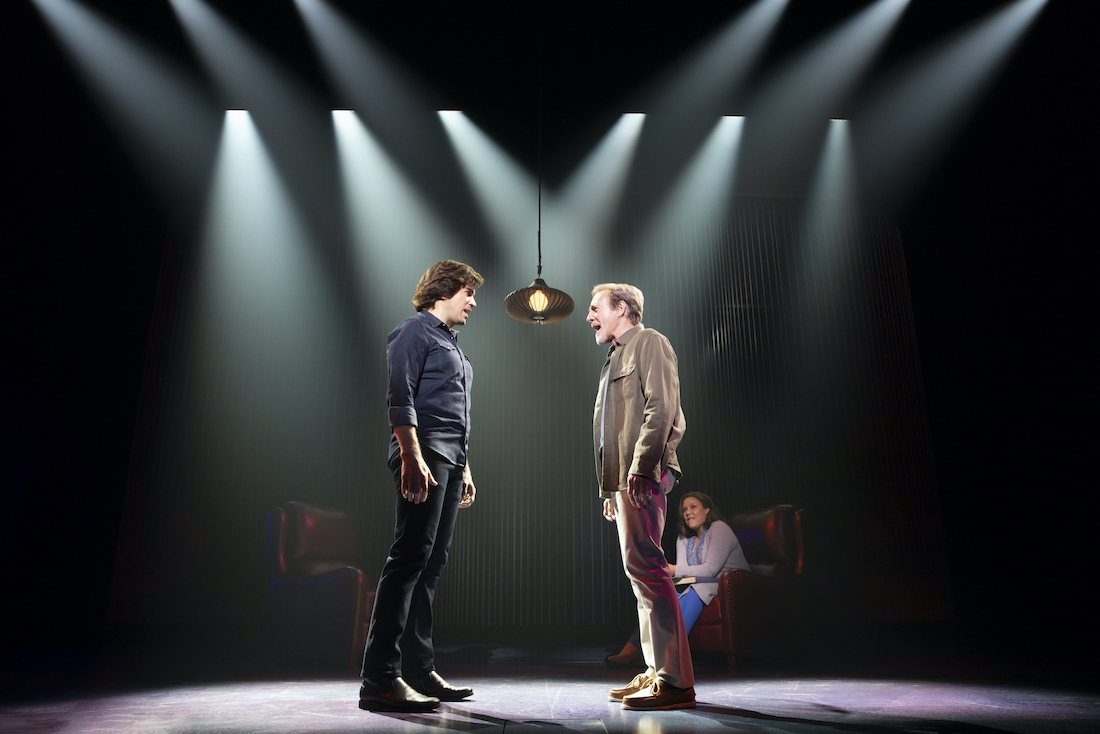 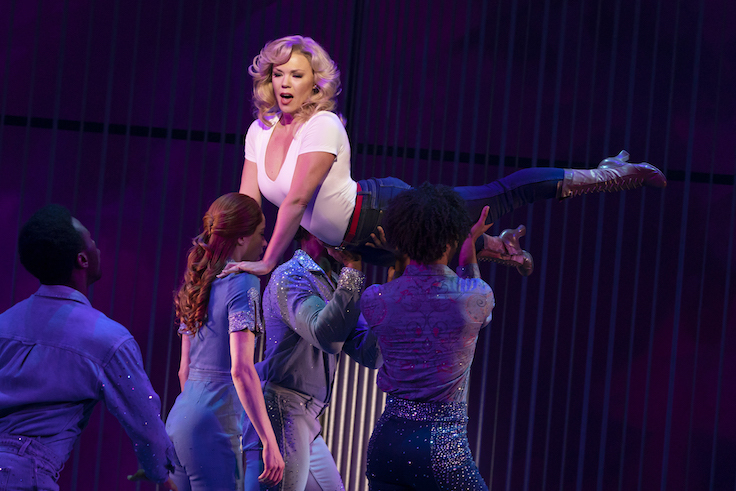 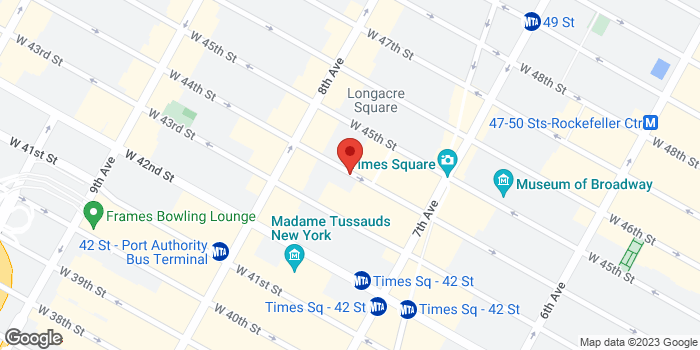