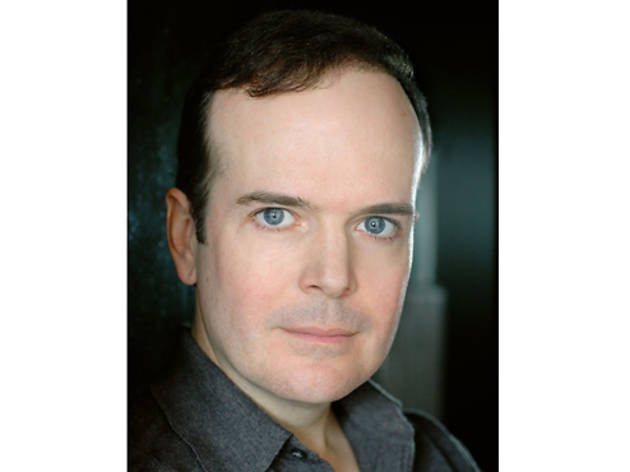 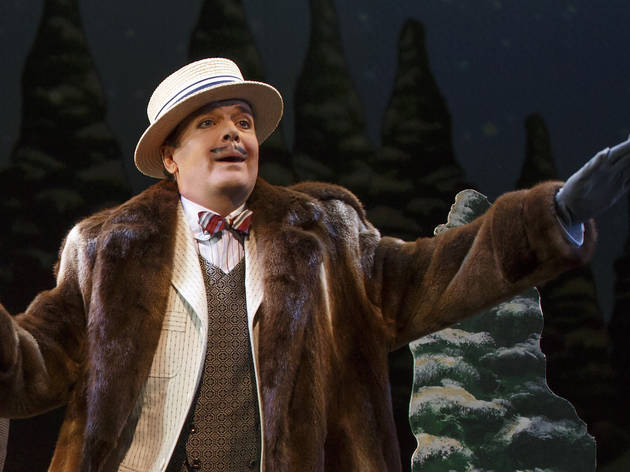 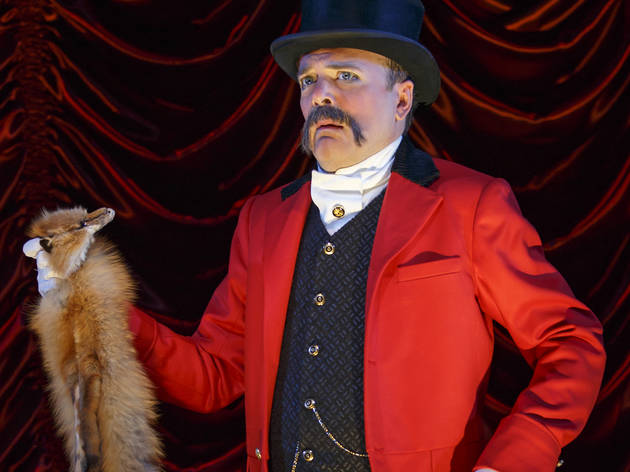 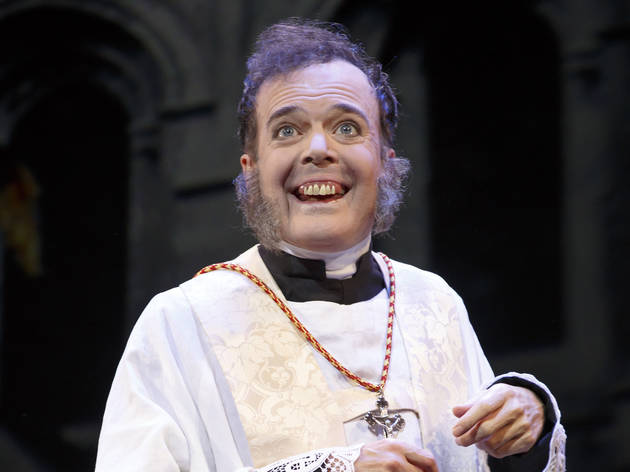 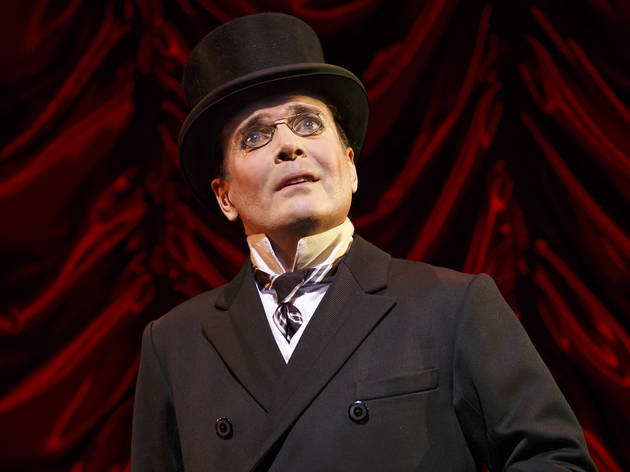 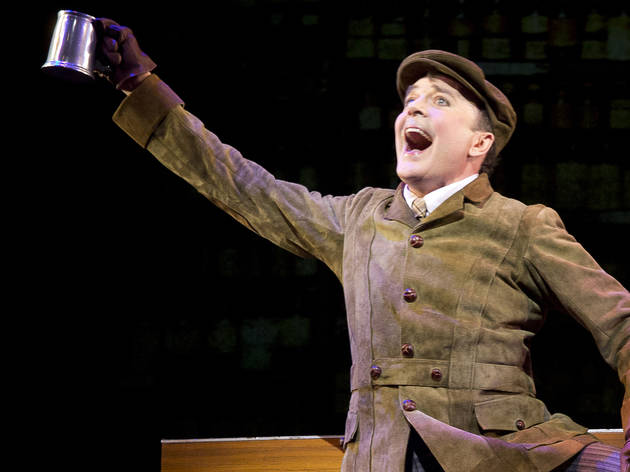 6/8
A Gentleman's Guide to Love and Murder: Henry D'Ysquith 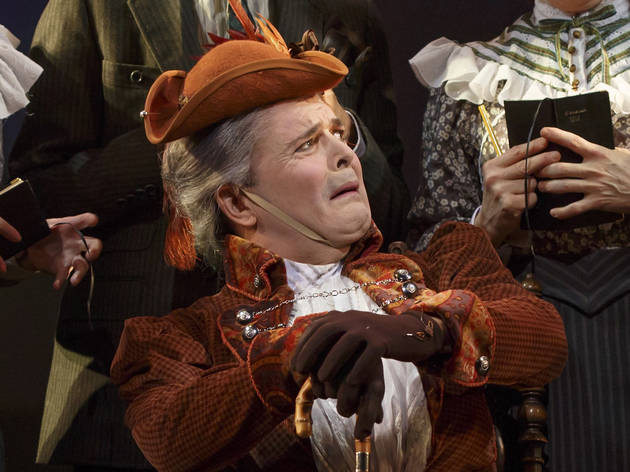 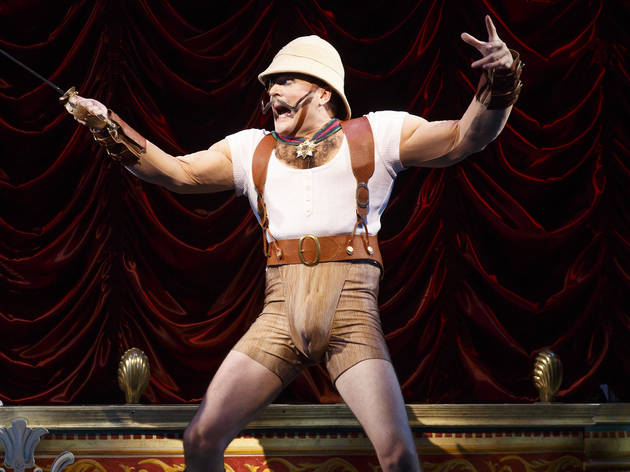 8/8
A Gentleman's Guide to Love and Murder: Major Lord Bartholomew D'Ysquith
Advertising
Composer Steven Lutvak is pitching the concept of his new musical over breakfast: “Downton Abbey with murder, but funny,” he says. He chuckles. “That’s a terrible pitch.” It’s the morning of the day that his A Gentleman’s Guide to Love and Murder is moving into the Walter Kerr Theatre. Though this is his first show on Broadway, Lutvak is relaxed and energetic, eager to talk about his ten-year-old project. In the world of Broadway—one of revivals, Hollywood casting and pop songwriters—an original musical comedy from the team of Steven Lutvak and Robert L. Freedman probably doesn't ring any bells, unless you’re a fan of the NYC cabaret circuit (in which Lutvak is a regular performer) or the 2001 Judy Garland TV biopic Me and My Shadows (Freedman wrote the screenplay).

With that in mind, Time Out sat down with Lutvak over eggs and coffee, and he primed us on the five things we should know about GGLM.

(1) It’s Dexter, but British and with singing. While Lutvak presents GGLM as Downton Abbey on account of the 19th-century English setting, its main character can be compared to likable serial killer Dexter. Monty Navarro discovers that he is a long-lost relative of the aristocratic D’Ysquith (pronounced “Die-skwith”) family and in line to be the next Earl of Highhurst. The only downside is that there’s eight relatives in front of him, so he decides to murder each D’Ysquith one by one and claim his fortune. It’s the classic My Fair Lady–esque rags-to-riches tale, but with dead bodies, which makes it both old-fashioned and modern, according to Lutvak. “Musicals are riddled with people with a dream achieving their dream," he says. "What makes this [show] contemporary and subversive is the fact that Monty is an antihero." Not to mention that it takes guts (no pun intended) and skill to take out eight people. Monty does it while singing jaunty musical numbers and keeping his waistcoat clean. “It’s the audaciousness of it,” Lutvak says simply. “And that’s what makes the character lovable.”

(2) The musical almost didn’t happen. It took about ten years for Lutvak and book writer–colyricist Freedman to take GGLM from conception to Broadway, but it wasn't all workshops and tryouts. The musical is based on the Roy Horniman novel Israel Rank: The Autobiography of a Criminal, published in 1907. Israel Rank was also the inspiration for the 1949 film Kind Hearts and Coronets. In 2010, the world premiere of GGLM was delayed because of a lawsuit brought by Kind Hearts' rights holders, who claimed that GGLM was based on the film. The judge eventually ruled in the live show’s favor, saying (as paraphrased by Lutvak): “These are both iterations of the same underlying material. While the movie plants its tongue firmly in its cheek, the musical sticks its tongue out.” It’s not everyday that there’s a judge who is, in Lutvak’s words, “such a clear fan of musical theater.”

(3) There’s cross-dressing. In the film, all eight members of the D’Ascoyne family, men and women, are played by a pre–Star Wars Alec Guinness. Similarly, the entire D’Ysquith family is portrayed by one actor, Jefferson Mays, who previously essayed multiple roles on Broadway in I Am My Own Wife, in 2003. His involvement puts the musical firmly in farcical territory. “Part of the fun is that he gets killed, but we know he’s coming back, so we can delight in the murders,” explains Lutvak. “There was a product that used to be advertised on late-night television. It was called Weebles and their tagline was ‘Weebles will wobble but they don’t fall down.’ In a way, Jefferson is the Weeble!”

(4) The music is what happens when you make a Noël Coward, Arthur Sullivan, Stephen Sondheim and Mozart smoothie. “I only listened to Così fan tutte while writing this,” Lutvak admits. So expect some piano flourishes, duets and trios, and a general “faux classicism” sound. But don’t expect polite lyrics. Take this example from “I Don’t Understand the Poor”: “I suppose there are some with ambition / Say, the pickpocket, beggar or whore / From what I can tell / They do quite well / They’re rising above / And it’s what they love / But I don’t understand the poor!” Lutvak and Freedman also manage to rhyme D’Ysquith, though we won’t say with what.

(5) If you’ve ever wanted to off your family, this is the musical for you. “I believe [that] intrapsychically, we all want to kill our families,” Lutvak says with a grin. And because the murders are the main attraction, the methods in GGLM are varied, ranging from drowning in an icy lake to poison and (because this is the theater) getting shot à la Hedda Gabler, but with a real gun. When asked which form of extermination he prefers, Lutvak aims to be gentle: “I have to say drowning. If you go that far, the compassionate side of me wants it to be a painless death. And I’m the guy who wrote the show with the eight murders in it!" If A Gentleman’s Guide to Love and Murder had a subtitle, it would probably be Whac-a-Mole with Jefferson Mays. The protean actor plays all eight D’Ysquiths, who each (and this is not really a spoiler), die in a variety of ways. Time Out caught up with Mays to ask him about his Alec Guinness obsession. He also introduced us to each D’Ysquith. In the slide show above, mouse over to the right side and navigate through this rouges gallery.

How did you get involved with GGLM?
I was just offered it out of the blue, to come into a workshop of the musical. It was based on this book called Israel Rank, written in the early 20th century, and it was the same source material as this film that I loved as a child, starring Alec Guinness. And I just remember being about nine or ten and having my childhood glee imbued in this film. I remember watching him and having this feeling that this is what I want to do for a living! I want to dress up in different costumes and play all of the roles. It was an early encounter with my life’s work. And I do feel about ten years old now.

Were you influenced by Alec or did you try to make it your own?
I tried to make it my own. I deliberately didn’t watch the movie again. I honestly tried to read the book four times but it was so turgid, I couldn't get through it. I just used the script as Robert Freedman wrote it. And then pulled the other characters from the central casting office of my mind.

What’s with you and playing multiple roles?
I think actors, a lot of actors, myself included, have this pathology they suffer from. I call it the Bottom Syndrome, from A Midsummer Night’s Dream. Bottom is always shouting out, “Let me play Thisbe! I want to be the lion!” And I think we’re all that way, and it feeds my pathology magnificently. I probably have a short attention span so that’s ideally suited for the material.

What else do you too have in common with Alec Guinness?
I flatter myself to think I have anything in common with him at all! He’s always been a hero of mine. I’ve always admired his transformative powers. He always disappears into a role. He’s not afraid to use prosthetics, false teeth, the right pair of glasses…. And I saw all of his films at a very early age. I saw him play a Scottish commander in Tunes of Glory, with red hair and buzz cut, and George Smiley in Tinker Tailor Soldier Spy. I went through an Alec Guinness binge in my formative years so he’s influenced me a lot.

Which song do you think people will come out humming?
It’s a remarkable tuneful score that I’m humming constantly. I may sound like a Philistine saying this, but it is nice to come out of a show humming something. Unfortunately I’m never humming the songs I sing, I’m always humming the ones that other people sing. One of my favorite songs is “I Don’t Understand the Poor.” Which seems appropriate to the age in which we live. It was fun singing it during the last election when we were at Hartford Stage.

Give me a one-line description of each D’Ysquith.

Lord Asquith D'Ysquith, Sr.
A rather dessicated but humane man of business. He’s probably the most decent of the lot.

Lady Hyacinth D'Ysquith
A battleax of a society grand dame.

Lady Salome D'Ysquith Pumphrey [No picture in slide show]
A preternaturally bad actress in Hedda Gabler. You can probably guess how she meets her end.

They’re all despicable. An Edwardian manifestation of the eight deadly sins. Well, I guess there are actually only seven deadly sins. But everything bad and wrong with the British Empire is neatly personified in that family.

Which one is your favorite to play?
That’s like Sophie’s Choice. They come and go so quickly! I think the average D'Ysquith stage lifespan is 4.6 minutes. It’s hard to get too attached to any of them. Sometimes I think I spend more time offstage in costume changes than I do on stage portraying the people. I don’t really have a favorite. It changes from night to night.
Recommended