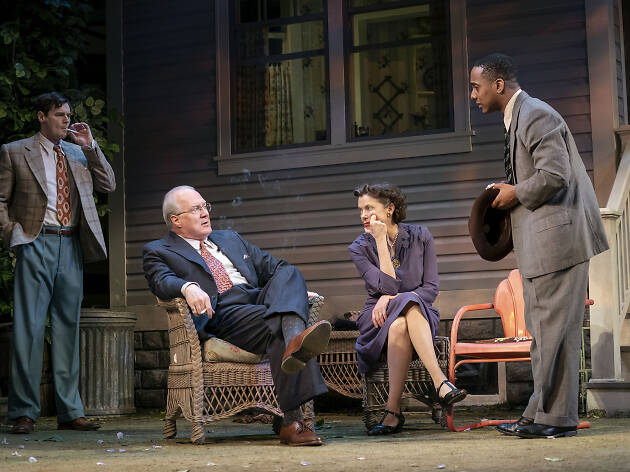 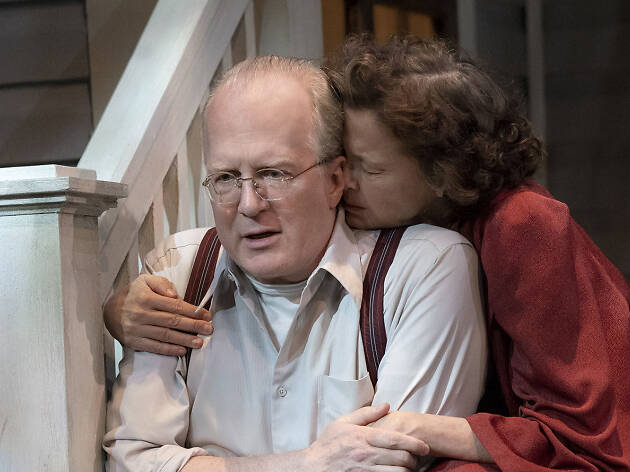 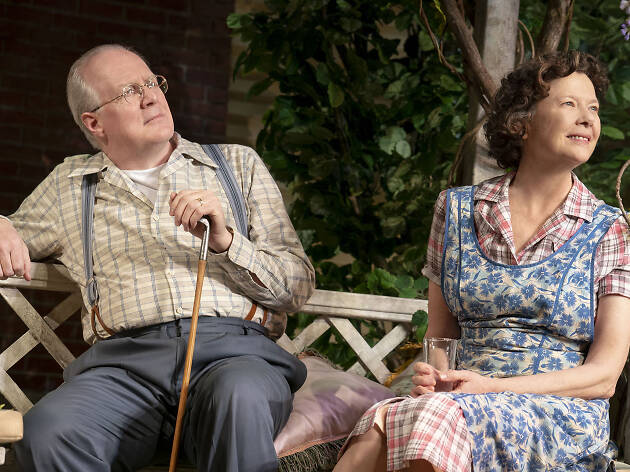 There is a real and precious thing at the center of All My Sons, the Broadway revival of Arthur Miller’s 1947 tragedy. It is the trio of Tracy Letts, Annette Bening and Benjamin Walker, playing members of the doomed Keller family. Letts is Joe, a morally slippery foundry owner, sleek with self-delusion about his complicity in selling faulty engine parts during World War II; Bening, speaking with a voice like thunder, is his wife, Kate, who is heartbreakingly certain that their missing son might yet come home from the fight. Walker plays their other son, Chris, a paragon of decency and virtue, teetering on the edge of learning the family secret. All three are believable in every detail—blockbuster actors dedicated to small, unshowy connections to one another. In scene after scene, they do wonders.

Around them, though, is a flatter and falser world. The Ohio backyard of Douglas W. Schmidt's sitcom-bright set abounds in fake greenery: The proscenium drips with fabric leaves, and there’s synthetic grass underfoot. Under Jack O’Brien’s direction, much of the dialogue is delivered by the Kellers’ neighbors and friends with “Gee, mister!” artificiality, which damages the sense that we’re peering into the past. Yet when it comes to broad strokes, Miller himself is partly to blame. When his hand was at its deftest, he painted complicated families full of good intentions and human failing. But in All My Sons, he verges on the cartoonish—no one anywhere has ever been as saintly as Chris, for instance—to make his points about shared responsibility. Miller was trying to write his Antigone, and in its best moments, he touches the hem of Sophocles’ garment. But the self-consciousness and laboriousness of his effort haven’t dissipated after 70 years.

What does work after all the decades is Miller’s stunning climax, a series of emotional explosions that erase all traces of the awkwardness before them. O’Brien’s cast is ready for the fuse: First Bening combusts, then Walker goes up like a Roman candle, and ultimately Letts collapses in an avalanche of dust. There are other strong elements in these final sequences, particularly Hampton Fluker’s performance as the weirdly childlike George—who has been deeply wronged by the Kellers but who wants to forgive them anyway, because it would let him pretend to be innocent again. His dazzled eyes reflect the central trio, staggered by their charisma and blinded to any flaws. Does All My Sons have failings? Never you mind. All you'll be able to remember is a family of giants falling one after the other, like a stand of redwoods crashing down.