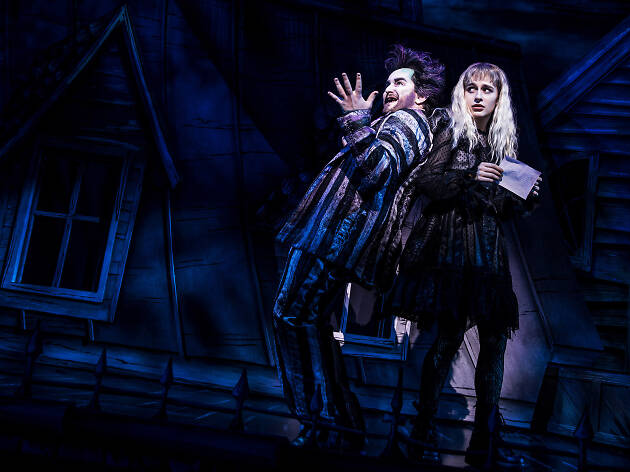 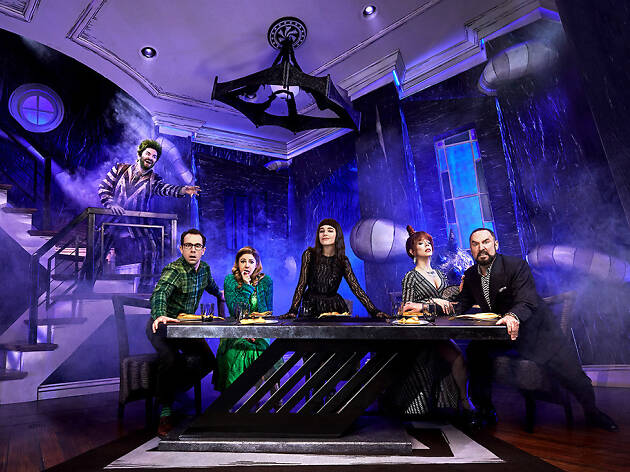 Whatever else it may or may not be, Beetlejuice is spectacularly weird. The best creative work in this musical adaptation of Tim Burton’s 1988 film—about a pair of sweet ghosts trying to rid their house of its distasteful new inhabitants—has gone into its physical form: The designers come at it from all kinds of crazy angles. David Korins’s haunted-house set seems to buckle in the middle and stretch at the edges; William Ivey Long’s costumes are a batty vision of colors and patterns at war. There are magic tricks and giant worms and a starkly linear idea of the afterlife that contrasts well with the chaotic world of the living. If only so much of the rest of Beetlejuice were not a busy mess.

The film’s protagonists, milquetoast “newlydeads” Adam (Rob McClure) and Barbara (Kerry Butler), no longer seek out the loathsome “bio-exorcist” demon Beetlejuice (Alex Brightman, working overtime); he targets them in a scheme to leave the netherworld, even though only a living person is capable of making him visible there. Much of Adam and Barbara’s function has been reassigned to Lydia (the gifted young Sophia Anne Caruso), the goth teenage daughter of the house’s new owner (Adam Dannheisser), a widower with an insecure New Age girlfriend (comic dynamo Leslie Kritzer). A little of the hyperactive, rattle-voiced, lecherous Beetlejuice goes a pretty long way, but the show makes him its central figure. Sometimes he’s a murderous pansexual scuzzball (he refers to the living as “breathers”), Dr. Frank-N-Furter to Adam and Barbara’s Brad and Janet; sometimes he’s a cuddly Saturday-morning-cartoon version of himself, the Genie to Lydia’s Aladdin; sometimes he plays for sympathy as a lonely, needy outsider with mommy issues. Lydia has parent problems of her own—she has been given a plot line about grieving her dead mother, which comes to a head in an icky sentimental scene with her dad that is followed by an exponentially ickier musical number about a pedophilic marriage.

The rules that govern all of this are somehow both overexplained and utterly opaque. Beetlejuice’s fourth-wall-breaking first song essentially instructs the audience not to take what follows too seriously, and that is solid advice. It looks great, and there are strong performances and some outré laughs, but none of it quite fits together; the tone varies wildly, and skids around on Eddie Perfect’s slipshod score. (The rhymes are as slanty as the set.) Beetlejuice's director, Alex Timbers, and book writers, Scott Brown and Anthony King, have a record of smart and funny work. Of the ill-advised choices they have made this time, one can only ask: What possessed them?