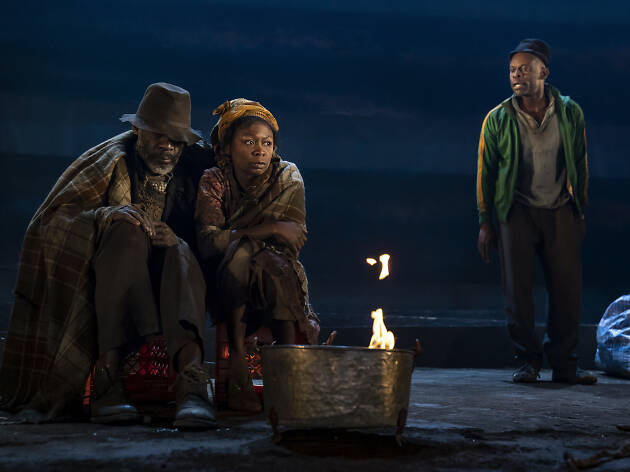 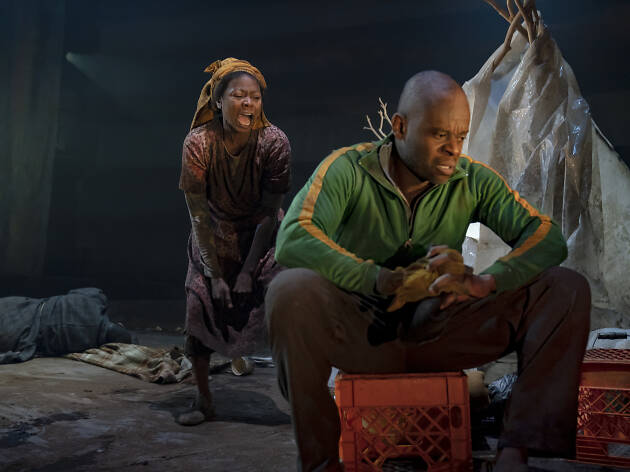 Signature Theatre Company's revival of Athol Fugard's Boesman and Lena is unrelenting. Having just been bulldozed out of their makeshift home, the titular South African nomads of the title, played respectively by Sahr Ngaujah and Zainab Jah, arrive on the mudflats of a river, schlepping everything they own on their weary bodies. Boesman is silent and stoic as he sets up camp; Lena babbles on, especially about their shared history, which she can no longer quite recall. Theirs is a bleak existence marked by abuse, addiction and unimaginable loss. But when Lena invites a destitute old man (Thomas Silcott) to share what little they have, though he doesn't even speak their language, the dynamics of the central relationship shift.

Fugard was offering a direct indictment of Apartheid-era segregation when he wrote Boesman and Lena in 1969, but director Yaël Farber, a fellow South African, emphasizes its timelessness. The individual details may vary, but oppressed and displaced people have been suffering since the beginnings of human civilization. As the play’s outcasts trudge around Susan Hilferty's mucky set—which features a single leafless tree, à la Waiting for Godot—you may be reminded of today's refugee crises.

Yet while the production is powerful from an intellectual perspective, it can be emotionally numbing. Farber has eliminated the intermission, and even during the curtain call the actors don't drop their characters or their clanking belongings. The repetitiveness of their overwhelming hopelessness may be the point but, especially during the first half, it triggers a self-protective detachment in the audience. Only when Boesman and Lena's routine is disrupted do they start to tear at your soul. Boesman may be despicably violent, but Ngaujah makes it clear where he's coming from, particularly in a searing monologue about the nature of freedom; and Jah's loquacious Lena is the broken heart of the show, permanently stooped from a life of anguish yet clinging fiercely to her humanity—perhaps in vain. Boesman and Lena may leave you impressed at the resilience of the spirit or depressed by the revolting way people continue to treat each other. Either way, it is a challenge to endure.