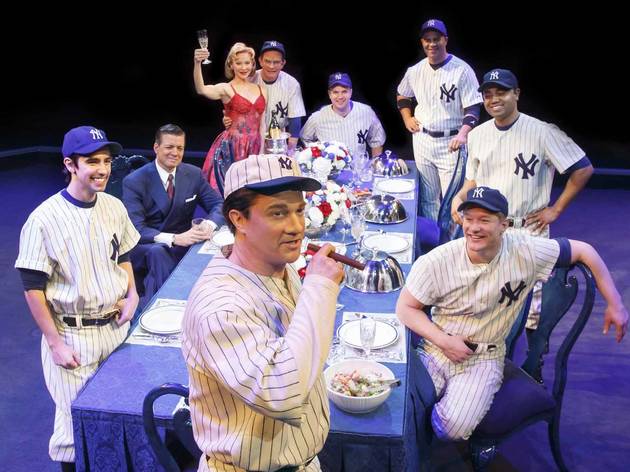 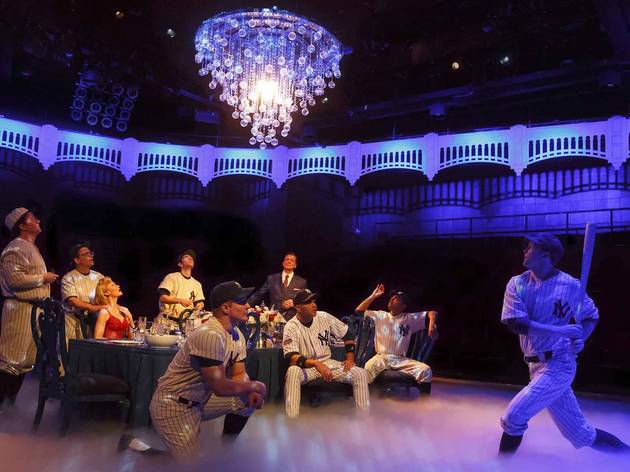 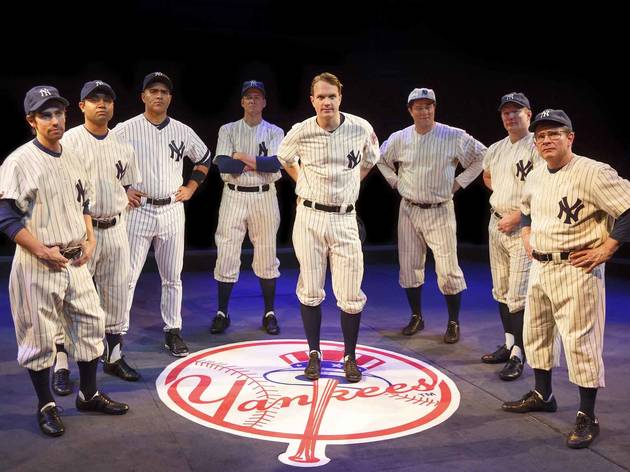 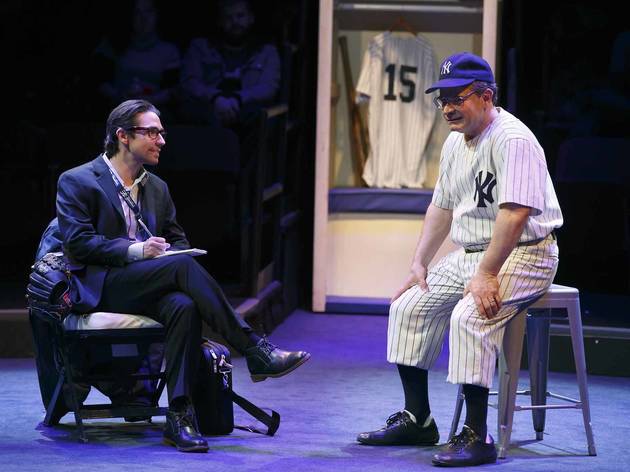 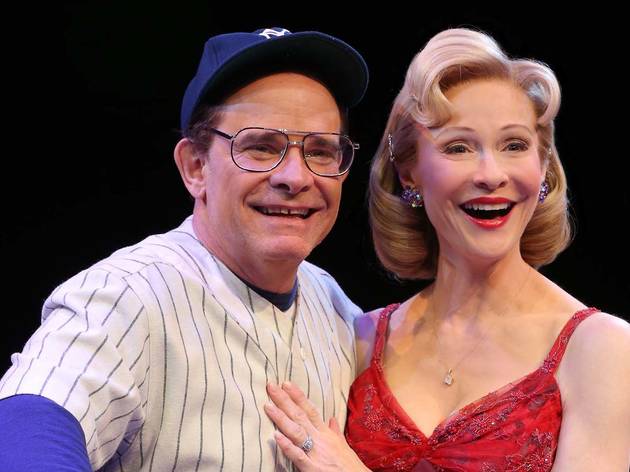 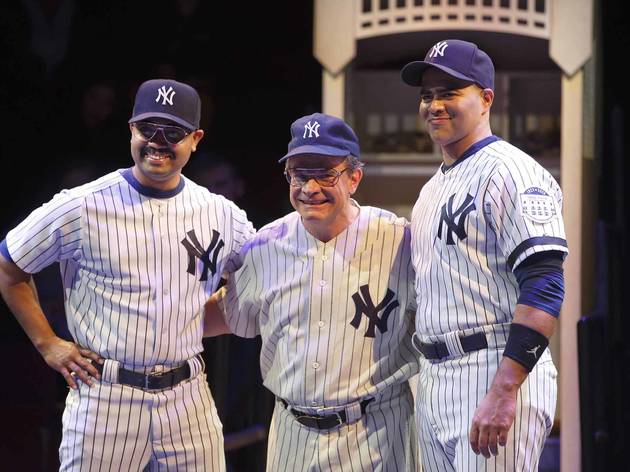 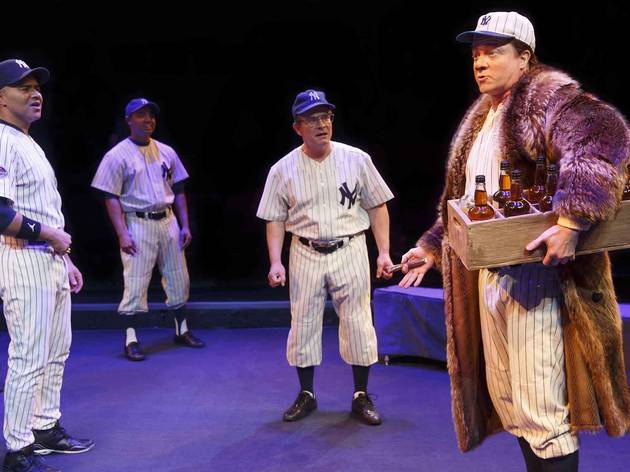 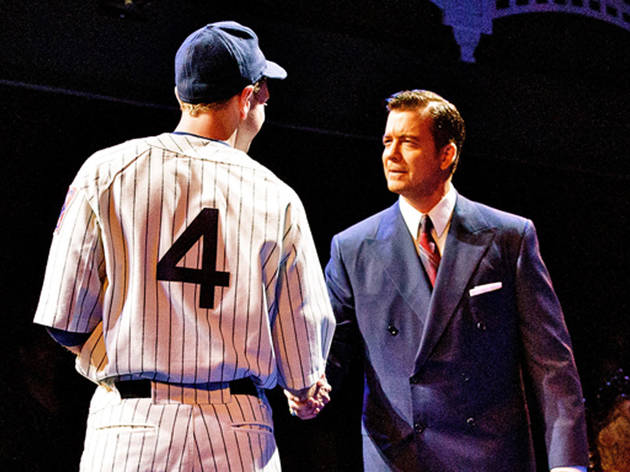 Playwright Eric Simonson (Lombardi) returns to the sports arena with a part-fantasy love letter to the Yankees, pitched to guys who get a lump in the throat from seeing Lou Gehrig shake hands with Derek Jeter.

I’m no Bob Costas, but since when does blundering around in the minor leagues get you to the World Series? After writer-director Eric Simonson’s Bronx Bombers was greeted by lukewarm-to-negative reviews Off Broadway, the time-skipping mash note to the Yankees seemed destined to play out its limited run. Yet here it is on Broadway, with celebrity casting and hydraulic set changes, taking up Circle in the Square Theatre. Bigger is certainly not better for this myth-mongering trifle, pitched lazily to fans and neophytes, but plopping down somewhere in the foul territory.

Iconic catcher-turned-coach Yogi Berra (Peter Scolari) is the thread that binds the bits of baseball history together. In the opening scene, set in 1977, he tries to make peace between hotshot Reggie Jackson (Francois Battiste, stealing bases and the scene) and dyspeptic Billy Martin (Keith Nobbs). Later, the ulcer-afflicted Yogi dreams that his wife throws a transhistorical dinner for Yankee greats such as Babe Ruth (C.J. Wilson), Lou Gehrig (John Wernke), Micky Mantle (Bill Dawes), Joe DiMaggio (Chris Henry Coffey) and Derek Jeter (Christopher Jackson). The pinstripe giants discuss what’s more important: individual genius or team spirit. How about decent coaching? Case in point: Bronx Bombers’ cast is full of appealing character actors, but the game plan is a mess. To coin a Yogiism: The main reason the play is lousy is that it’s no good.—Theater review by David Cote

THE BOTTOM LINE: This corny baseball fantasy strikes out.

If penning sports plays were a competition, Eric Simonson would be MVP. He’s found drama in football coaching (Lombardi), basketball rivalry (Magic/Bird) and now, with Bronx Bombers, the national pastime. None of these qualify as great works, but for some theatergoers, they offer tantalizing glimpses into exotic subcultures. When might the bard of ESPN get around to synchronized swimming and the caber toss?

Bronx Bombers touches on high points of 20th-century Yankee history, although it hasn’t been so much plotted as researched and pitched to guys who get a lump in the throat from seeing Lou Gehrig shake hands with Derek Jeter. It begins in 1977, with coach Yogi Berra (Richard Topol, adorably gruff and spouting Yogi’s pearls of pseudo-wisdom) convening a peace talk between rabid manager Billy Martin (Keith Nobbs, intense) and narcissistic Reggie Jackson (François Battiste, supercool).

After intermission, we get an extended dream sequence-dinner with past and present legends: Babe Ruth (C.J. Wilson), Lou Gehrig (John Wernke), Joe DiMaggio (Chris Henry Coffey) and others. Simonson, who directs his own script too laxly, touches on predictable tensions between individual excellence versus team spirit, but in terms of ideas or visual flair, there are no curves here.—Theater review by David Cote

THE BOTTOM LINE: This fan letter to the Yankees is no home run.

Rube was never afraid of competition! Anyone out there who's seen Bronx Bombers, we will give you $10 tickets to Sousepaw so you can decide what the best baseball play of the season is. Either come to the box office or email ShelbyCompany@gmail.com for a discount code. You see, you decide. Our money is one Rube.