How often does a musical actually change your life? The deeply beautiful Caroline, or Change has that power, if you let its spirit move you. Here is my own testimony. When I saw the show’s original production at the Public Theater in 2003, I was shaken; when I saw it four more times in its too-brief subsequent Broadway run, brilliant new aspects of Tony Kushner’s libretto and Jeanine Tesori’s music revealed themselves to me with each visit. It has affected the way I interact with people—in a positive way, on a daily basis—ever since.

At once humane and surreal, Caroline, or Change was ahead of its time in many ways back then; among other things, it is a story about capitalism, white privilege and the removal of Confederate statues. Times have changed, and audiences at its first Broadway revival, now playing at Studio 54, may be readier for what the show says and for the transfixing figure at its center: Caroline Thibodeaux (the formidable Sharon D Clarke), a Black divorcée with four children who works as a maid for the Jewish, middle-class Gellman family in 1963 Louisiana. The Civil Rights movement is gaining steam, but Caroline is too busy ironing to join it—she can’t afford to—and drudgery and loneliness have made her tired and sour. In Broadway musicals, such people nearly always go unsung. This show is a monument to her.

Offsetting its serious themes, Caroline, or Change employs a whimsical running device. Alone in her abasement—the overheated basement of the Gellman home—Caroline does laundry and hears the voices of anthropomorphized household objects: the bubbly washing machine (Arica Jackson), her friend; the maleficent dryer (the mighty-voiced Kevin S. McAllister), her enemy; and the radio (Nasia Thomas, Nya and Harper Miles), a girl-group pop trio. Outdoors, a bus (McAllister) and the moon (N’Kenge) also sing to her.

Caroline has a harder time connecting with real people, including her spirited daughter, Emmie (Samatha Williams), and her fellow maid, Dotty (a terrific Tamika Lawrence), who takes classes at college after work. Noah Gellman, the eight-year-old child of her employers, idolizes her—to the exclusion of his uncommunicative father, Stuart (John Cariani), and his new stepmother, Rose (the energetic Caissie Levy), a transplant from New York—but he’s always underfoot. And the underlying fissure between them opens to a chasm when money enters the picture, in the form of the pocket change that Rose instructs Caroline to keep if Noah leaves it in his pockets.

Caroline, or Change is a musical that demands and rewards your trust in its superb writers. Kushner and Tesori take their time weaving the show’s themes; the big crisis point doesn’t arrive until the second act, building to Caroline’s 11-o’clock number, "Lot's Wife," a devastating aria of frustration and acceptance that Clarke delivers with the significant power it requires. Clarke’s Caroline is different from that of Tonya Pinkins, who originated the role unforgettably; whereas Pinkins was uncompromising in her refusal to go soft, forcing you to examine your relationship to her hardness, Clarke is somewhat more emotionally available to the audience. (You feel more of the character’s exhaustion and religious piety, less of her coiled fury.)

Clarke’s grounded, moving performance provides much-needed ballast to a production that, in other regards, often gets in its own way. The cast sings gloriously, but British director Michael Longhurst—perhaps worried that audiences will get bored, or beholden to some notion of what Broadway musicals should look and sound like—pushes nearly everything and everyone too hard. The set and costumes, by Fly Davis, are campy and tacky; the staging is distractingly busy, with actors continually rotating on turntables or blowing bubbles or marching around for no good reason. The musical’s original director, George C. Wolfe (who, unlike Longhurst, is Black, American, Southern and experienced in staging musicals) found a gorgeous balance between the show’s realistic and imaginative elements. That doesn’t come through in this version; it often feels like Priscilla Queen of the Basement up there, which does not convey the overarching sense of sadness and isolation in the Gellman house, both downstairs and upstairs, that is crucial to the show.

But change comes whether you welcome it or not, and my reactions to this production are, I recognize, the luxuries of someone who has seen the show many times before, as not nearly enough people have been able to do. Make no mistake: Caroline, or Change is a masterwork, even in its altered frame. It should be experienced by everyone—and for all the things I might change about this version, I can’t wait to see it again. 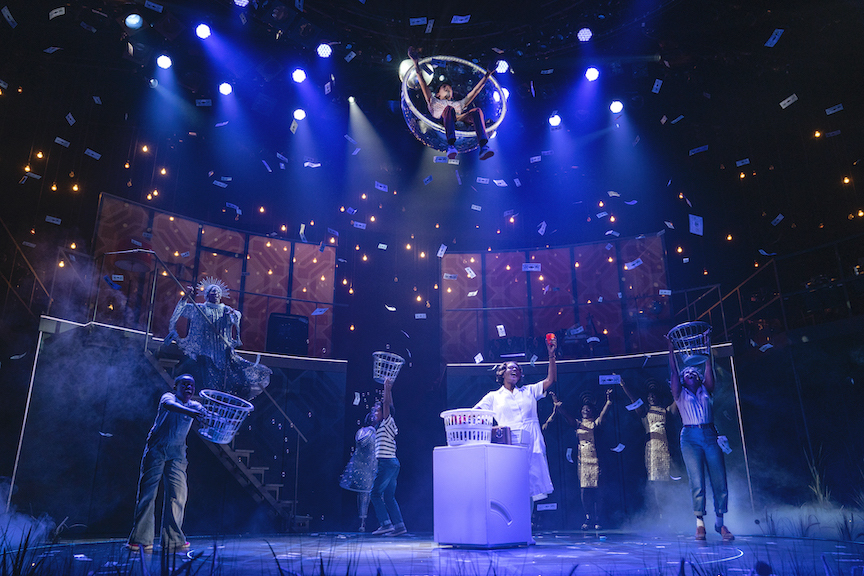