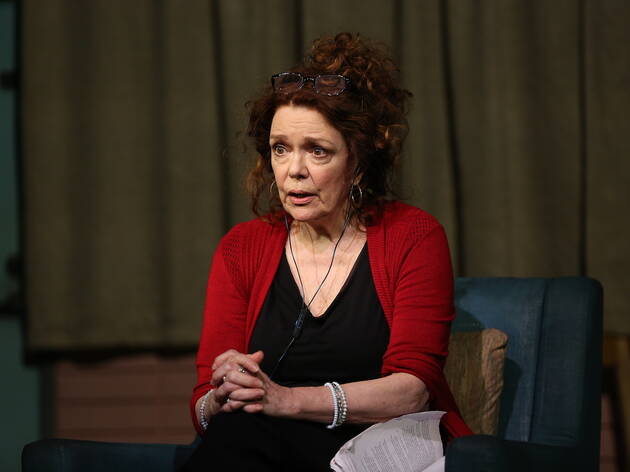 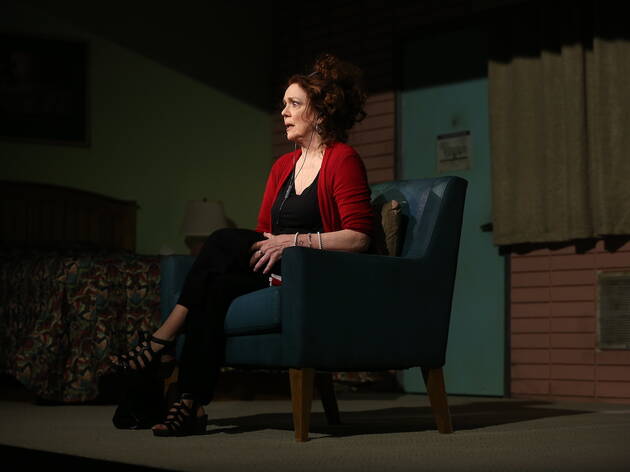 Lucas Hnath’s uncanny and unsettling play Dana H. doesn’t channel the dead; it channels the living. Its subject is harrowingly personal. In 1998, when Hnath was in college, his mother, Dana Higginbotham, was beaten and held captive for five months by a violent criminal and white-supremacist gang member named Jim. In 2015, Steve Cosson, of the docutheater troupe the Civilians, interviewed her about this ordeal over the course of several days. Their conversations form the basis of Dana H., but instead of editing them into a conventional script, Hnath has kept them in audio form. In the title role, Deirdre O’Connell does not speak a word; for 75 minutes, calmly facing us in an armchair, she lip-syncs to Dana’s actual voice.

O’Connell is nothing less than astonishing. Long-form lip-sync is not new—one thinks of Bradford Louryk’s Christine Jorgensen Reveals, Lypsinka’s The Passion of the Crawford, much of the Wooster Group’s oeuvre—but I don’t think I’ve ever seen it done quite so unshowily. This is a performance of virtuoso naturalism, radiant with inner life; the technique is so perfect that it disappears. At many points in the show, I would have believed she was talking into a body mic, even though Mikhail Fiksel’s astute sound design and editing make it clear that we’re listening to a recording. (The actor and magician Steve Cuiffo is credited as her lip-sync consultant.)

The effect of this device is complex: The use of Dana’s voice gives her testimony a gripping sense of reality, even as its ventriloquism through O’Connell’s body suggests an eerie sense of dissociation from its own experience. On Broadway, where it is performed in rep with Is This A Room, the show remains as riveting as it was at the Vineyard last year. Les Waters’s taut production places Dana in a drab, seemingly ordinary environment—Andrew Boyce’s neat motel-room set, lighted by Paul Toben, has a Pepto-Bismol pink back wall—that contrasts with the messy and horrific story she tells.

Watching Dana H. is like listening to a fascinating true-crime podcast, and part of the interest is in the mysteries that adhere to Dana’s account, which may be distorted by trauma and time. There are things she can’t explain about what happened to her, and at times you wonder what she is leaving out or, perhaps, what Hnath has chosen not to include; wrestling with your response to Dana as a narrator is part of what makes the play so resonant. This is a woman of resilient Christian faith but also a woman with a dark side—she casually mentions having dabbled in Satanism—and a complicated history. (She was “pretty well prepped” for the physical abuse she suffered at Jim’s hands, she says, by the beatings she received as a child.) And she’s a survivor, but not completely. By the end of Dana H., you understand why she now works in hospice care, providing final comfort to people on the edge of death. Having been through hell, she carries demons with her still. She's self-possessed.

RECOMMENDED: Back to Broadway: A Q&A with Dana H. star Deirdre O'Connell