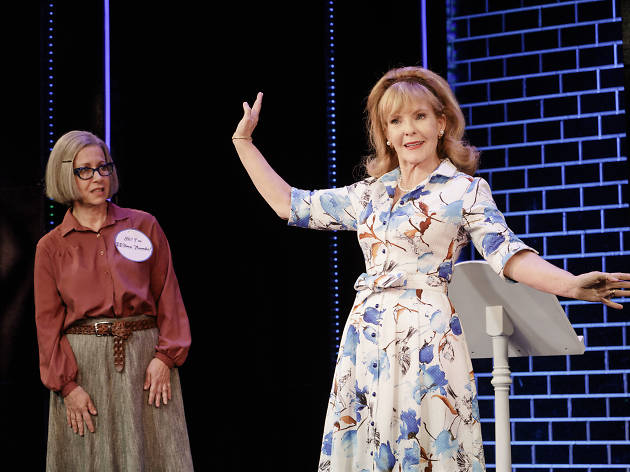 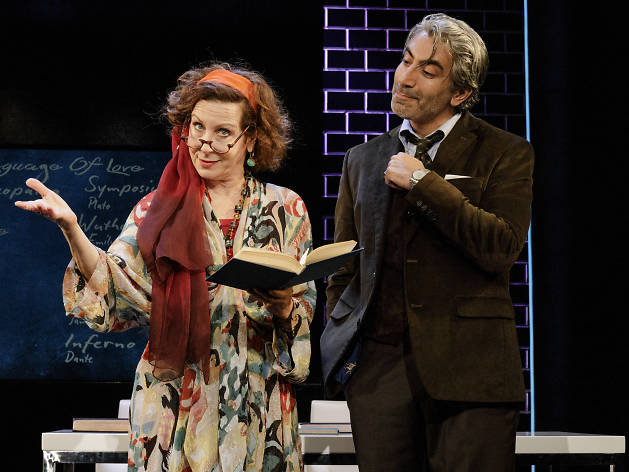 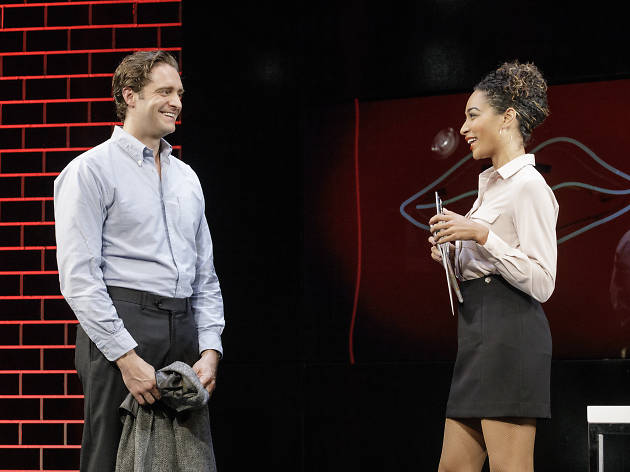 Thanks to the Brett Kavanaugh hearings, we’re suddenly steeped in prepster culture, and the late A. R. Gurney’s mission to chronicle the waning WASP ethos now seems perversely topical. Final Follies, the fittingly titled title play in Primary Stages’ triptych of Gurney one-acts at the Cherry Lane Theatre, was completed shortly before his death last year. Yielding to his more whimsical side (cf. Sylvia), Gurney attempts to whitewash the porn industry with an ostensibly charming meet-cute romance. Colin Hanlon plays Tom, a cash-strapped, sockless-Weejuned, 40-ish neer-do-well who decides to try his hand (and other body parts) at cranking out cinematic marital aids in the interest of sex therapy—or so the cover story goes, as related dispassionately by a receptionist named Tanisha (a polished Rachel Nicks, overriding the rather racist stereotype assigned her). This is a clean business, she explains:  “I got rid of the street kids and runaways.” (Enhancing the antiseptic atmosphere is James Youman’s fashionably minimalist set, in defiance of Gurney’s stage directions.) Hunky-dory, then, but not in the eyes of Tom’s prudish elder brother, Walter (Mark Junek, a perfect Blifil to Hanlon’s Tom Jones). He snitches to Tom’s old-guard grandfather (Greg Mullavey), only to have the strategy backfire—as does this minor play, whose appeal is limited to those who enjoy watching male establishment types engage in vigorous back-slapping about questionable behavior.

Director David Saint, a frequent Gurney collaborator, plumps the program with two chestnuts from Gurney’s under-heralded salad days. In The Rape of Bunny Stuntz (1964)—an unfortunate title, though it’s meant ironically—Deborah Rush plays a steely, idealized ’60s housewife, perfectly got up in floral shirtdress and bouffant pageboy, who does her best to chair a committee meeting while decompensating over the unforeseen arrival of an apparent paramour, and a déclassé one at that. (He drives a red Impala and, worse, chews gum.) Piter Marek, as a janitor, and Betsy Aidem, as a frumpy Bunny wanna-be, pull focus cartoonishly in peripheral roles. They return in The Love Course (1969), in which Aidem shines as a Bohemian college professor way too caught up in her syllabus: the literature of romance. She’s co-teaching with a married male partner. By rights, he ought to start out straightlaced in contrast to her flowing scarves and loosened stays; Marek, however, plays him as florid and histrionic from the get-go, complete with mid-Atlantic accent, so there’s not much of a shift when he finds himself warming to her over-the-top overtures. The play itself is a keeper, though. Gurney, mired at MIT when he wrote it and yearning for the cooler clime of New York's downtown scene, makes the most of his deep knowledge of procedural folderol and preening male ego—themes that show no signs of falling out of date.