Free
Recommended
4 out of 5 stars 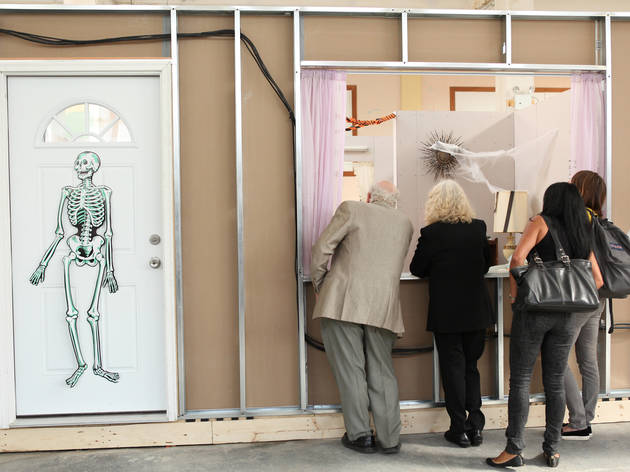 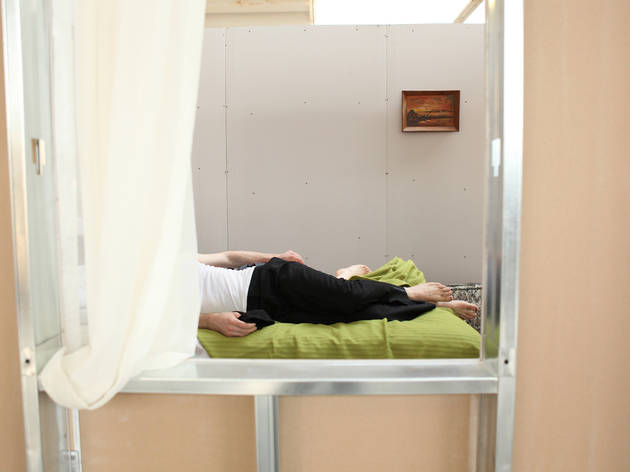 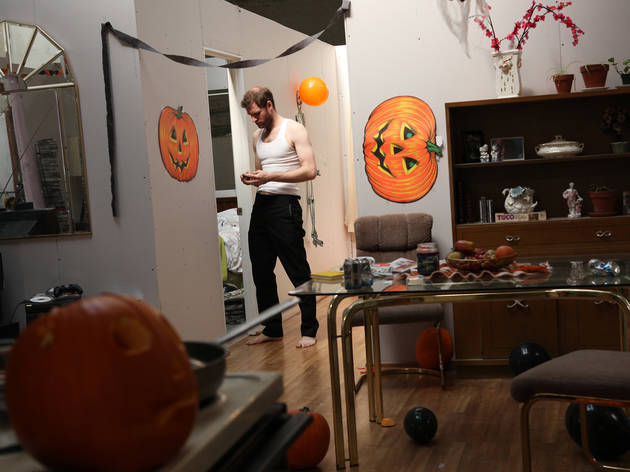 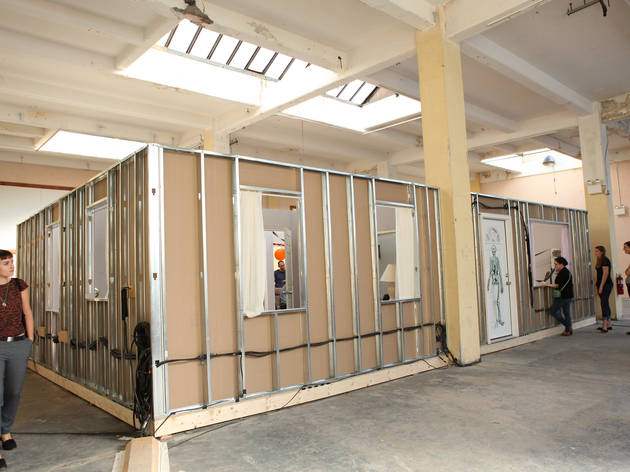 Normally, I would never review a show after leaving halfway (or one-fourth of the way) through, but not every performance is like Habit, a durational, voyeuristic installation that tests the boundaries of realism, narrative, actor endurance and audience patience. For eight straight hours, three performers enact an 80-minute play over and over again for approximately six cycles. The set they occupy is dressed to look like a grungy two-bedroom house, and audiences can walk around the outside, peeking in at the action through windows, following characters from room to room by running around the periphery. The exterior of the structure is all exposed metal supports, electric cables and plumbing. For the length of the performance, this is a fully functioning environment, in which actors can make coffee, fix a bowl of cereal, take a shower, relieve themselves, and snort fat lines of cocaine. I will assume the blow is fake.

Then again, it takes a lot of energy to pull off this elaborate, exhausting stunt. I watched a couple of the cycles and felt tired. Playwright Jason Grote (1001) provides the text, a scarily plausible mélange of Adam Rapp–style grunge metaphysics and Lucy Thurber–esque blue-collar angst, with a dash of the Amoralists’ over-the-top furniture-trashing machismo. The play-within-the-installation (titled, to pretentious perfection, Children of Kings) concerns two brothers: drug-dealing prick Doug (Ben Mehl) and sensitive-poet type Mitch (Brian Bickerstaff) and their high-school friend and crush Viv (Eliza Baldi).* (There are two casts that alternate performance days. The other ensemble includes Quinlan Corbett as Doug, Matthew Stadelmann as Mitch and Stephanie Wright Thompson as Viv.) It’s Halloween morning (or afternoon?), and the three wake up in the apartment hung over after a long night of partying. As they decorate the slovenly place with paper pumpkins and glowing skeletons, fraternal tension grows, secrets leak out, crimes are confessed, and pretty soon a gun is waved in faces. The language is slangy, abusive, profane and overwrought. The acting is consummate realism. You can practically smell the rancid emotions—or maybe it’s just moldy Cheerios.

If the play had been presented straight at Rattlestick, 59E59 or Atlantic Stage 2, it would be merely derivative and pointless, maybe irritating to jaded critics. But trapped inside director David Levine’s rigorously playful panopticon, it becomes the subject of aesthetic inquiry, a sort of Schrödinger’s box for representational theatrics. (Only in this case, we can see inside the box and note that the cat is both dead and alive.) The fourth wall is religiously observed by the three actors, but is rendered moot by spectators scuttling around from window to window, giggling or whispering, or just getting bored and leaving. You can marvel at Marsha Ginsberg’s scrupulous design, the actors’ stamina, or Jason Grote’s parodic flair. Levine pulls it off, creating a spectacle that works variously as sculpture, (second-rate) drama and a metatheatrical conversation piece.

Although this conceptual stunt is prime directors’ theater, it also belongs in large part to the actors. They must hew to the script and the general story arc of the piece, but they are free to change blocking, emotional temperature, intensity and the violent ending of the piece. Part of the pleasure of watching Habit is seeing the actors make big and little changes in their line readings and physical placement. There’s a great deal of improvisation that happens within a rigid structure.

Habit’s title says it all. It refers to the emotional ruts the characters find themselves in, to their addictions, to the actors who have become habituated to their script and situations. But the habit that the piece most slyly critiques is that of our theater culture, in which plays not so dissimilar to Children of Kings are produced every season with a deadening ethos of unexamined, living-room naturalism. Most of these interchangeable nonprofit or regional offerings are not art. Perhaps they would be if someone built walls around them and stuck them in a gallery.—David Cote