Patrick Page and Amber Gray have been on the road to Hadestown for years. Anaïs Mitchell's bluesy folk opera, inspired by the ancient myth of Orpheus and Eurydice, had its first professional theatrical iteration in 2016, when director Rachel Chavkin staged it at New York Theatre Workshop with Page and Gray as the tempestuous gods Hades and Persephone. Three years and four productions later, Hadestown's Broadway version has earned 14 Tony Award nominations, including nods for both actors. The only cast members who've been with the show throughout its journey, they play been-there, done-that, seen-it-all spouses—while he builds a soulless underworld empire, she indulges in spirits and springtime above ground—who rediscover their lost passion through the story of the ill-fated central lovers. We chatted with Page and Gray about what it's been like to incarnate these dueling deities.

Amber, you've worked with Rachel Chavkin on several projects, notably Natasha, Pierre & the Great Comet of 1812. But Patrick, how did you get involved with the show?
PAGE: To my shame, I had been working uptown mostly. I hadn't worked downtown in a long time. I was looking for jobs for my acting students when I saw this ad and it said they wanted a bass. I thought, Nobody ever wants a bass: What the hell is this? And then I saw that it was directed by Rachel Chavkin, one of the best directors working today—I hadn't seen a director like her since Julie Taymor. So I downloaded the two Hades songs from the concept album, "Hey, Little Songbird" and "Why We Build the Wall," and I thought, I have to do this.

The New York Theatre Workshop production was staged in the round, with the cast often performing in the audience. But Hadestown's last three mountings—at the Citadel Theatre in Edmonton, Canada, at London's National Theatre and now on Broadway—have been on proscenium stages. How has that affected your performances?
GRAY: I don't think I would engage with the audience as much if we hadn't done it the way we did at New York Theatre Workshop. It hit me the other day in thinking about "Our Lady of the Underground" [Persephone's growly showstopper at the top of Act II]. At New York Theatre Workshop it was its own separate entr'acte—it wasn't part of the plot, which it very much is now. So I got to treat it a bit like a cabaret number, which allows me to play around with it vocally.
PAGE: I think you're right. Because of New York Theatre Workshop, I make much more eye contact. I take in the audience much more than I normally do when I'm on Broadway and they're just sitting out there in the dark.
GRAY: I don't think the goal was ever immersive theater. We knew that if it went on it would have to become something else—which I love about it, because in the last 10 years it has been so many different things.
PAGE: When we first moved into a proscenium in Edmonton, I was worried that it wouldn't have the same intimacy. But there is something lovely, especially in playing a god, about having some distance from the audience. I'm able to direct their eye a little more than when they're immersed and they can look anywhere. Without wanting to sound too superstitious, it feels like every step of this has been preordained to bring it to this production. All the elements are right: The scale is right, and it's right to have it on a proscenium stage.

From the moment Hades and Persephone emerge on their balcony overlooking their empire, it's obvious they've got a lot of history. How has your onstage relationship evolved over the years?
PAGE: For me, it's been about deepening, which for me is just about trust with Amber. You don't even realizing you're serving a piece of intimacy but you are, and over time you get comfortable. And it's easy now, which is why I always say I can't do it without her.
GRAY: It's true. The way I talk about Hadestown 4.0 is there's such ease inside of it, in a way that is deeply freeing as an actor. That has deepened every time we've done it together. I joke that we are like an arranged marriage and we have learned to love each other—as humans and as Hades and Persephone.
PAGE: I definitely love Amber and consider her a friend, but she's got two babies and a husband, and I've got my wife. It's not like we're hanging out all the time. And that, in a way—this is going to sound weird—but it's almost helpful.
GRAY: I agree. 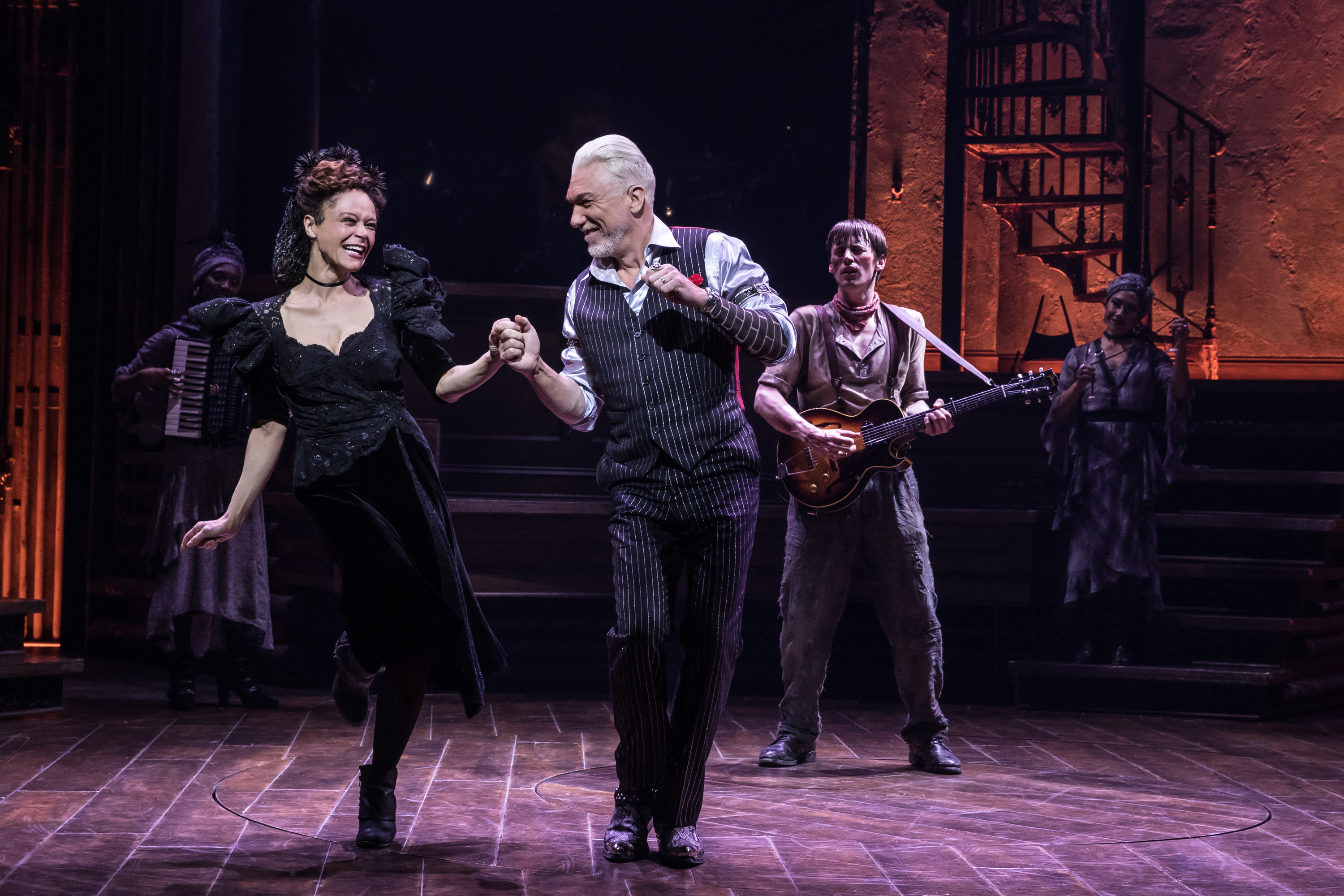 Both of you trained as actors, and came to musicals accidentally. And here you are, both nominated for your first Tony Awards for your work in Hadestown. Does that surprise you?
GRAY: I can't believe it. It just tickles me to death. If you had told me years ago this is what I would be doing, I would have said you were out of your mind.
PAGE: I never thought I would do musicals. I was terrified of singing because when I was a little boy, I auditioned for a musical that my dad was directing and I got a nonsinging part. He told me very kindly and as lovingly as he could that I was the best actor, but the other boy was a better singer.
GRAY: Oh Patrick! Oh no, no, I can't hear this!
PAGE: And I was just like, Okay, that's it, I'm never doing that again. But then I got to New York and a wonderful casting director got me to read for the part of Lumière in Beauty and the Beast. So that's how I started doing musicals. And that's where I met my wife!
GRAY: Oh my God, I did not know that! [Singing] "Be our guest! Be our guest!"

Patrick, you have a background in magic and you get to do a little trick onstage, making a rose suddenly appear.
PAGE: I Just palm a flower and then try to pop it out. Sometimes it pops better than others. One time I dropped it.
GRAY: Well, that one time was quite magical! This is how I know I'm safe on stage with this man. We added maybe 30 seconds to the show that night in finding a way of getting the rose back. We sort of both went for it, and then Patrick really got it. But he stayed down on the ground—which suggests certain things, a man on his knee. I still had to put it in his pocket, so I eventually realized it was best for me to get down there too. And then we were able to hold hands on the way up and go straight into our dance.
PAGE: It was cool because it was this little spontaneous dance of the relationship. I was kind of a mess through our dance, bawling my head off because I thought it was so beautiful, what you did.
GRAY: Me too, me too. I love when things go wrong because that's when you learn. That's when you're like, Oh, that's what this moment is.
PAGE: The show is really, really tightly made. Rachel is the most meticulous director I think I've ever worked with in terms of shaping the exact details. There isn't a huge amount of space for things to happen differently. But on the other hand, things are completely free. It's a paradox.
GRAY: Some directors, once a show is open, just leave it forever. Not Rachel. If something occurs to her eight months deep, I'm like, "Tell me, sister. I want to know."
PAGE: Every time you do something differently, it's like dominoes hitting one another.

So Hadestown 4.0 isn't necessarily the end.
PAGE: My experience with Rachel is that there is no end. I don't know who said this about writing a play but I imagine it's true about directing a play as well: You don't finish, you just have to abandon it because you've got to go on to the next thing. But you're never satisfied. Take the dance we have. Up until this production, we danced to a piece of music called "Lovers Desire," which is on the concept album and which I like a lot. But in terms of shaping the story, eventually Anaïs and Rachel realized it was Orpheus's song that we should dance to, not an entirely new piece of music. I was really worried: Why change something that ain't broken, you know? But now I just love it.
GRAY: I think the show has gotten cleaner and clear with each production we've done, and way more fun to do. I have a great time every night out there, and I feel like if that's earnest, people resonate with it.
PAGE: And the music, you know? And the lyrics are almost like little poems. There's a line I love singing every night: "Every coward seems courageous / In the safety of the crowd / Bravery can be contagious / When the band is playing loud." That's just such a great insight on top of a wonderful knocking-together of sounds. The show is filled with that.
GRAY: It's just that, over and over again.