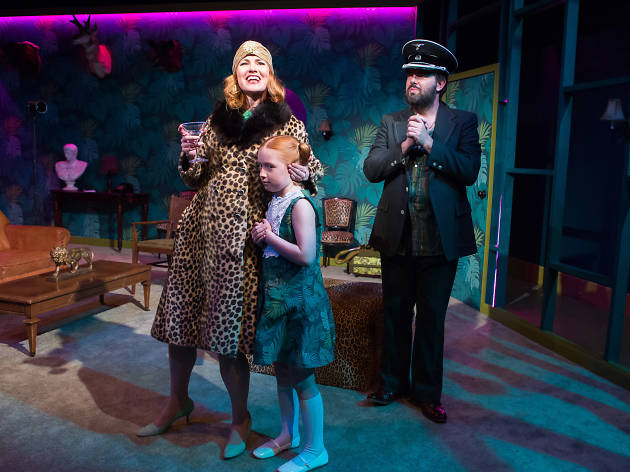 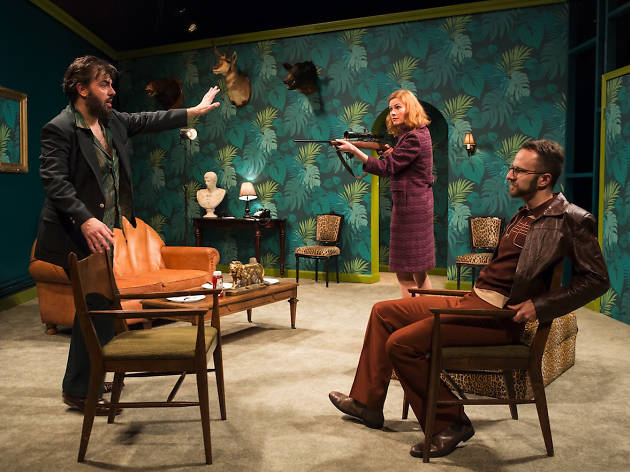 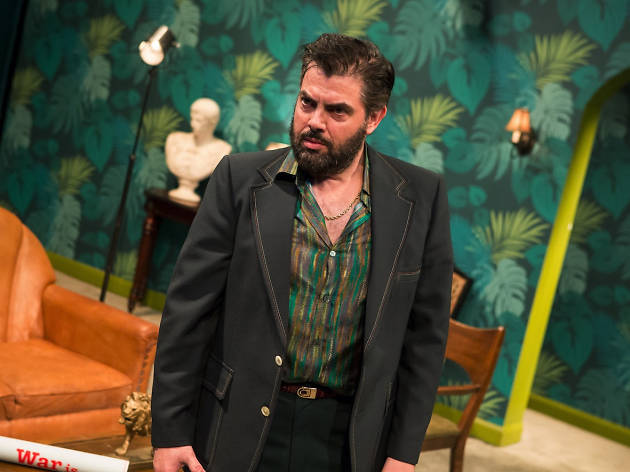 Watching Wheelhouse Theater Company's rare revival of Happy Birthday, Wanda June feels a bit like being unstuck in time. Although some of Kurt Vonnegut's surreal 1970 satire is amusingly dated, there are moments so eerily prescient that you're jolted back to the present, wondering if the celebrated author was some kind of soothsayer. But no, he was just a master at lampooning the kind of toxic masculinity that has gotten us into wars since the dawn of history.

In Happy Birthday, Wanda June, Vonnegut’s only full-length play, Harold Ryan (the electrifying Jason O'Connell) is a Hemingwayesque buffoon who, after being missing overseas for eight years, returns unexpectedly to his wife Penelope (Kate MacCluggage) and 12-year-old son Paul (Finn Faulconer). Although his apartment's jungle décor hasn't changed—Brittany Vasta's hilarious set looks like a hunter's wet dream—Penelope sure has: She's gotten herself an education and two suitors, pacifist Dr. Norbert Woodly (Matt Harrington) and vacuum salesman Herb Shuttle (Kareem Lucas). Ryan is not having any of it.

As the conquering leer-o, O'Connell stalks the stage like a predator, sizing up (sometimes smelling!) his rivals as he tries to get his family to fall in line. He also plays one of Ryan's victims: Major Siegfried von Konigswald, a.k.a. the Beast of Yugoslavia, who delivers darkly comic dispatches from Heaven alongside 10-year-old Wanda June (Charlotte Wise), an unnervingly cynical moppet who was accidentally killed by an ice cream truck. Director Jeff Wise helps his crackerjack cast navigate a tricky tonal tightrope between broad shtick and heartbreaking insight. An Act II monologue in which the fragile Colonel Looseleaf Harper (Craig Wesley Divino) recalls dropping an atomic bomb on Nagasaki is particularly chilling.

Even when his absurdist storytelling gets muddled, Vonnegut’s message resounds like the wake-up call of a bugle. While the author was responding to the Vietnam War, the piece is ultimately an indictment of all men who embrace sexism, racism and violence. Wheelhouse originally mounted this production on a smaller scale this past spring, and the show feels even more urgent now, as the midterm elections crowd the horizon. We can laugh at blowhards like Ryan and dismiss them as evolutionary throwbacks, but they're still here—and in charge.