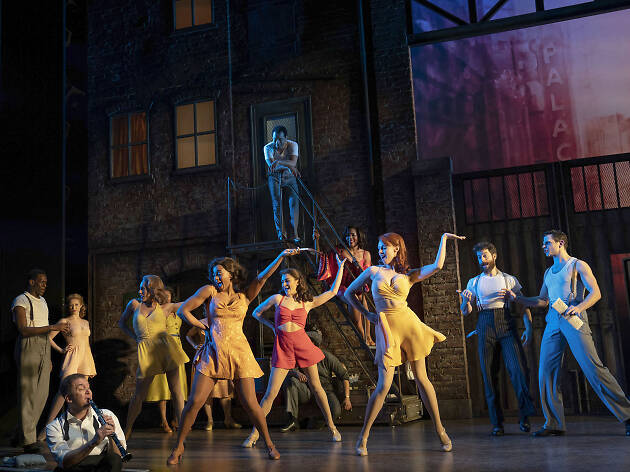 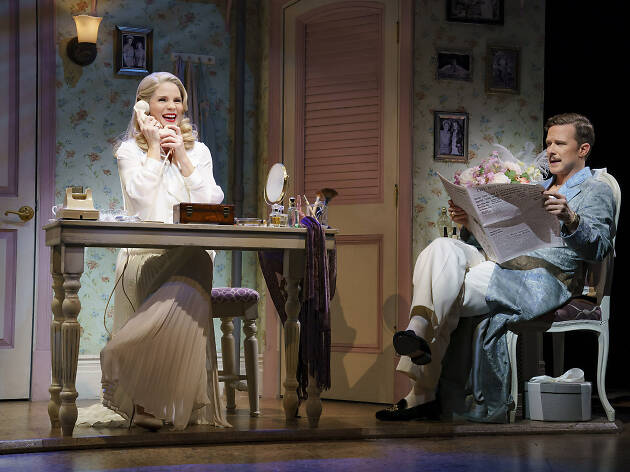 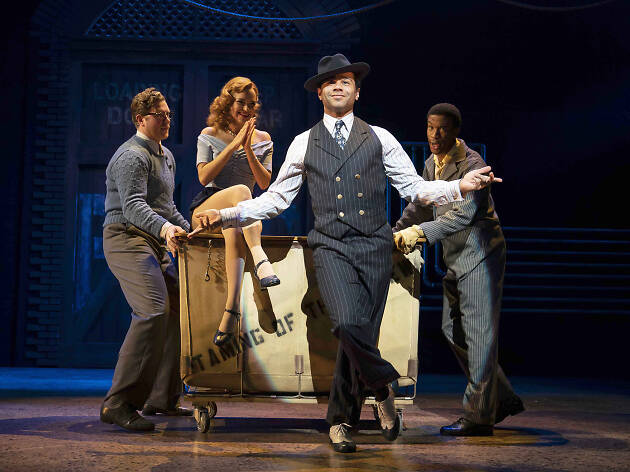 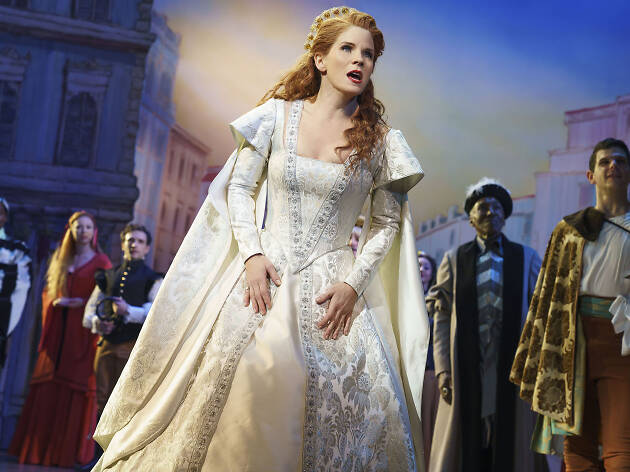 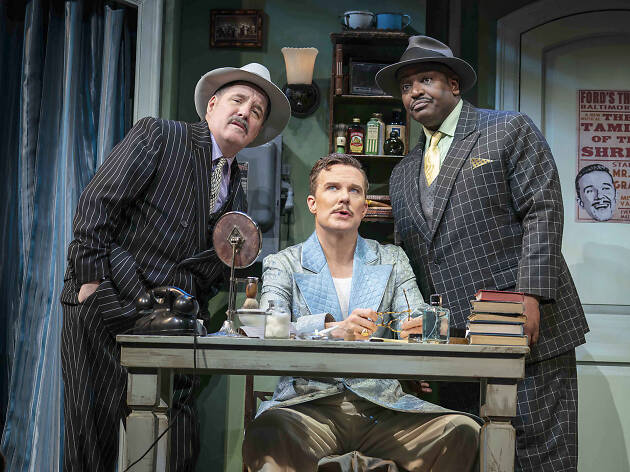 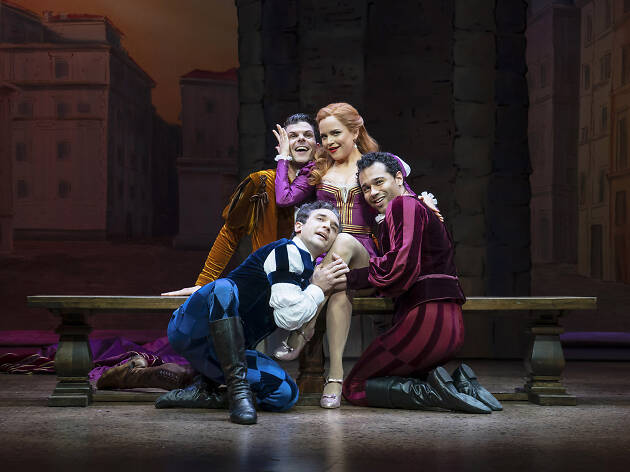 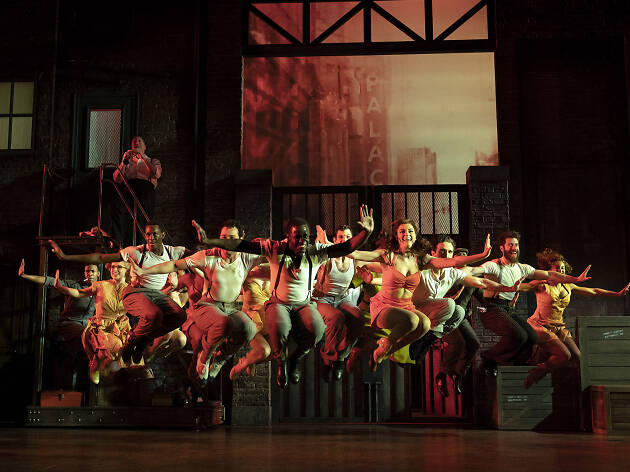 A Golden Age musical gets a careful modern polish.

After all the discussion last season about the sexual politics of My Fair Lady and Carousel, it may seem like a suboptimal time to revive, of all musicals, Kiss Me, Kate: a 1940s lark, inspired by Shakespeare’s The Taming of the Shrew, in which the tempestuous leading lady is—at least in the original version—spanked onstage by her ex-husband before returning to him, in the end, to sing a paean to feminine submission. Roundabout Theatre Company’s very diverting production is nothing if not sensitive to the show’s potential dangers. In his Playbill note, artistic director Todd Haimes promises a Kiss Me, Kate that “resurrects all the magic of its 1948 premiere while rising to the responsibility of a 2019 revival.” Gone is the spanking, and changed are some of the lyrics. In the most important instance, the chastened Kate no longer laments, in verse borrowed straight from the Bard, that “women are so simple”; her reproach now applies to “people” as a whole.

If only adjusting a show to fit modern sensibilities were quite so simple as that. At the center of Kiss Me, Kate is an enmeshed love-hate relationship between two headstrong actors that mirrors the plot of the version of Shrew they’re performing together. Actor-producer Fred Graham (Will Chase, in fine voice and a dashing period mustache) has pinned his tenuous financial hopes on a touring Shakespearean musical; his costar is his ex-wife, Lilli Vanessi (Kelli O’Hara), who has a reputation for being difficult. As Sam and Bella Spewack’s script and Cole Porter’s songs make clear, Fred and Lilli need each other’s drama, but they’re both too proud to admit it. Their sparks catch into fire, then settle into warmth.

In this production, the drama and fire are downplayed. O’Hara’s full and clear soprano is as lovely as always, but her Lilli is more whimper than bang; with her slightly weary poise, she barely hints at the tantrum-prone, high-strung virago that other people describe her as. (Admittedly, those people are men.) This may reflect an effort to deemphasize the qualities that could paint Lilli as a woman in need of docility training, but it also drains the part of some of its diva vivacity. Paradoxically, it tames her.

Without such changes, however, Kiss Me, Kate might not be revivable at all—and that would be a shame, since the Roundabout’s production is often a delight. For one thing, it affords an opportunity to rehear Porter’s score, which lists heavily toward witty-silly list songs but also includes the beautifully pining “So in Love” and the acidic “I Hate Men.” And whatever heat has been tamped down in the central couple flares up elsewhere in Scott Ellis’s staging—most exuberantly, and appropriately, in the second-act opener, “Too Darn Hot,” a pull-out-the-stops ensemble dance number that all but burns down the house.

Warren Carlyle’s inventive choreography is also showcased to wonderful effect in songs performed by the charming secondary couple: the gambling-prone hoofer Bill (High School Musical alum Corbin Bleu) and the frankly available showgirl Lois (Stephanie Styles). Bleu’s “Bianca” finds him tapping up the stairs of David Rockwell’s backstage set until he’s dancing on the ceiling; and Styles has a hilarious bit of business with a man’s jacket sleeve in “Always True to You in My Fashion” (a list of sexual dalliances that proves that, where Lois is concerned, there’s no such thing as free love). “Tom, Dick, or Harry”—a naughty, jazzy courtship number they share with dancers Will Burton and Rick Faugno in the show within the show—is another highlight.

Perhaps it shouldn’t be surprising that the musical seems happier and livelier when untethered from its central romance. For better or worse, the battle-of-the-exes, war-of-the-sexes comedy of Kiss Me, Kate has moved a bit closer to May I Have Affirmative Consent to Kiss You, Kate? But there’s plenty of pleasure to be had in its cautious embrace of Broadway's past.