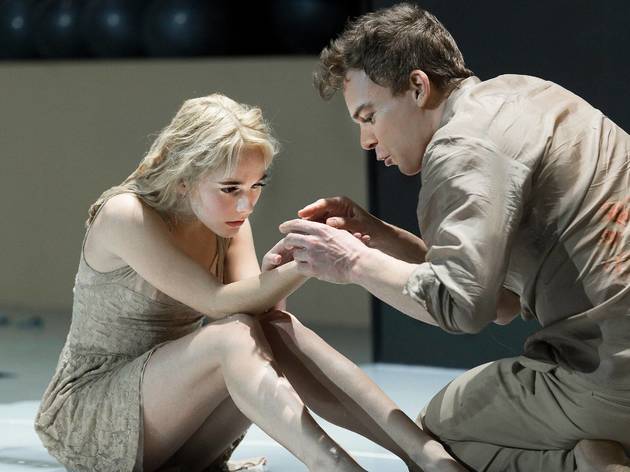 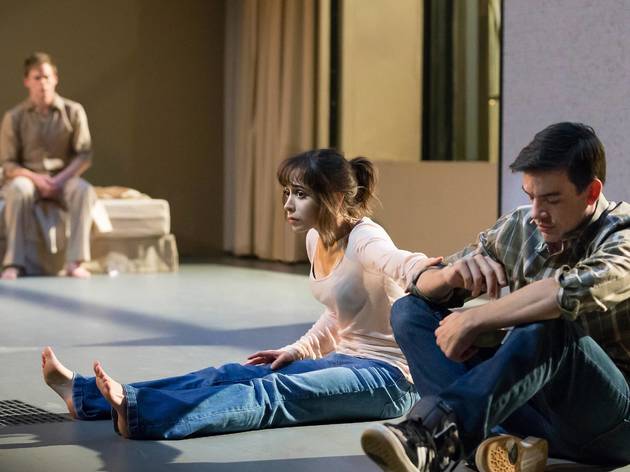 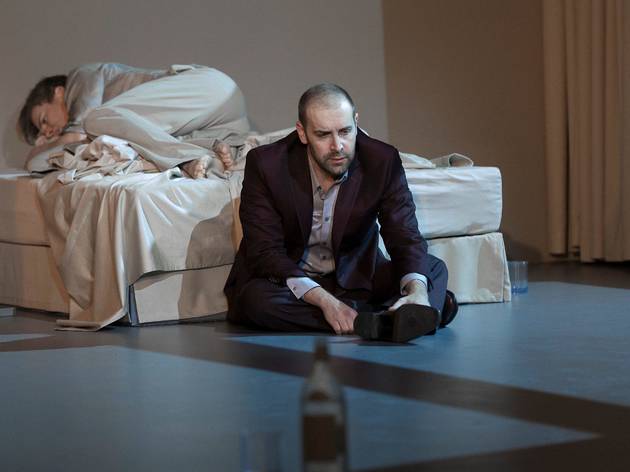 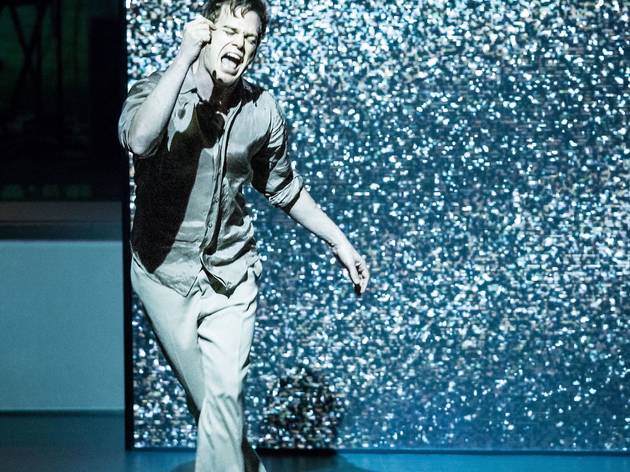 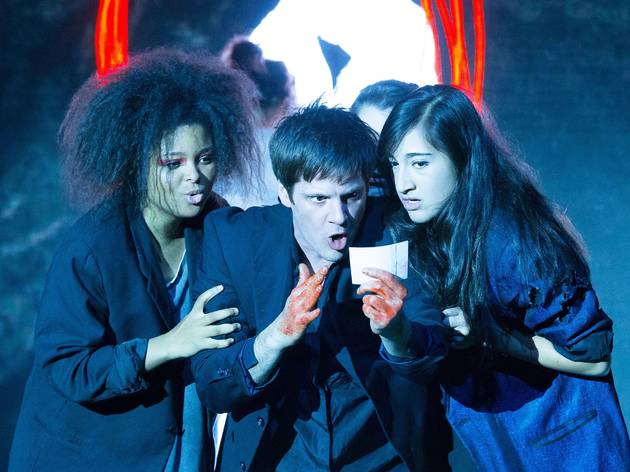 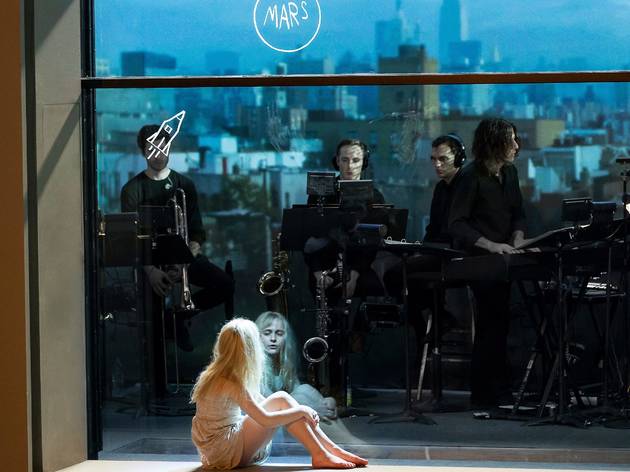 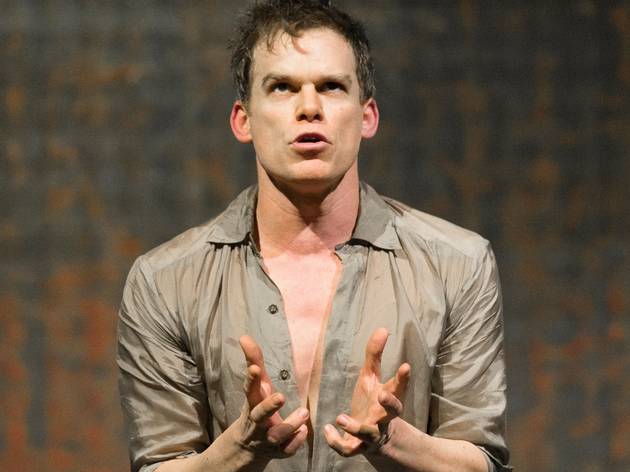 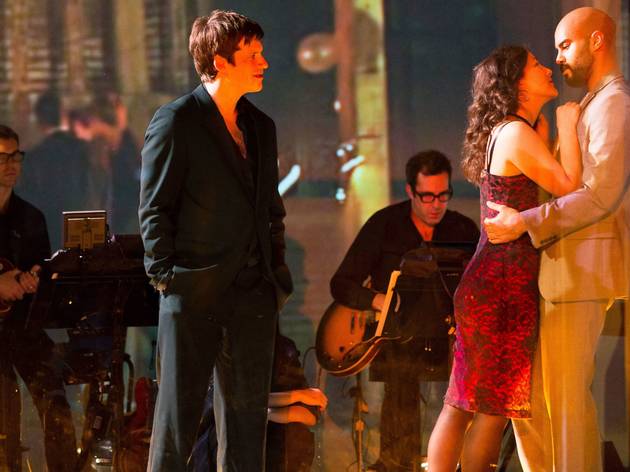 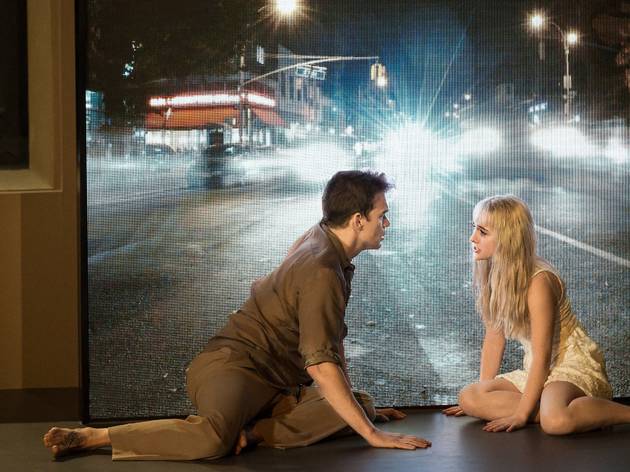 New York Theatre Workshop’s sold-out, buzzy Lazarus is hard to describe. Blame the holiday season, but I feel it’s like one of those old-timey TV Christmas specials, in which an isolated celebrity receives visits from other stars, trades banter and duets on beloved carols. (Sophia Coppola and Bill Murray just revived the tradition on Netflix.) Here, our host is Michael C. Hall, playing the stranded extraterrestrial David Bowie portrayed in The Man Who Fell to Earth (1976) and the songs are from Bowie’s catalog. Cameos include Cristin Milioti, Michael Esper and a pre-taped message from Alan Cumming. As for snow? There’s plenty of static on the video saturating this eye-candy-stuffed staging by Ivo van Hove (A View From the Bridge).

Beyond that, there’s precious little cheer to be had at Lazarus, which is coolly depressive and chicly designed (by Jan Versweyveld), as it circles around a dramatic void. Thomas Newton (Hall), the aforementioned space alien, is desperate to return to his home planet. He mourns the loss of Betty Lou, his housekeeper and former lover. Unwilling to live but unable to die, Newton guzzles gin and paces around his minimalist studio, occasionally stroking a large rectangular video monitor. Milioti plays Newton’s assistant, Elly, who falls in love with her employer and starts to dress in Betty Lou’s electric-blue lingerie and wig. Esper materializes as Valentine, a stylish ghoul who preys on lovers. Last in this strange parade is the ghost of murdered Girl (Sophia Anne Caruso) who haunts Newton, a surrogate for his own child back home.

If I got any of that wrong, complain to the creators, who don’t make Lazarus easy to follow. That the piece unfolds in dream logic, or as a fever dream, is fairly obvious in the first 10 minutes, so best to let it wash over you without worrying about sequence or connections. Such detachment is easy to achieve—even thrilling—when Milioti warbles “Changes” with such seething, repressed intensity, it’s like hearing that glorious anthem for the first time. Equally stirring is Hall’s spectral gasping of “This Is Not America” and his heartbroken rendition of “Heroes.” Caruso’s “Life on Mars” achieves a bracing, childlike simplicity and plaintiveness. Even casual admirers of the Bowie songbook will come away with renewed awe at his ruined-poet turn of phrase and jittery melodic genius.

But despite the attractive ensemble’s sweaty, passionate effort and van Hove’s cinematic staging, there is a book between the tunes. And that book is by Enda Walsh, an Irish writer whose oeuvre had its early high points (The Walworth Farce and bedbound) but more often bogs down in a cryptic, portentous mode one might call In Yer Face Beckett Lite. Walsh’s elliptical, fragmentary scenes evoke a melancholy-menacing vibe (loss, loneliness, a cold and inhospitable universe), but fail to make us care much about Newton’s existential crisis or Elly’s self-destructive obsessions. The script is laced with pop-culture references, snarky dialogue and casual profanity, as if Walsh were doing his best Adam Rapp. When Elly’s boyfriend, Zach (an underused Bobby Moreno) sees her in a blue wig, he flips out:

There’s far too much of this vague, banal badinage, none of it very convincing, despite the fine actors’ hard work.

In lieu of a text to create narrative tension, van Hove’s stagecraft is in overdrive, stunningly augmented by Tal Yarden’s stage-filling video design and Brian Ronan’s evocative soundscape. As noted, Bowie’s songs (accompanied by an onstage band) come across beautifully, and when Lazarus works, it’s as a trippy series of live music videos. Any marriage of Bowie’s hits to a theatrical structure is bound to be unstable, especially if the end goal is not a jukebox musical, but Walsh’s lack of originality and depth makes the enterprise seem more earthbound.—David Cote