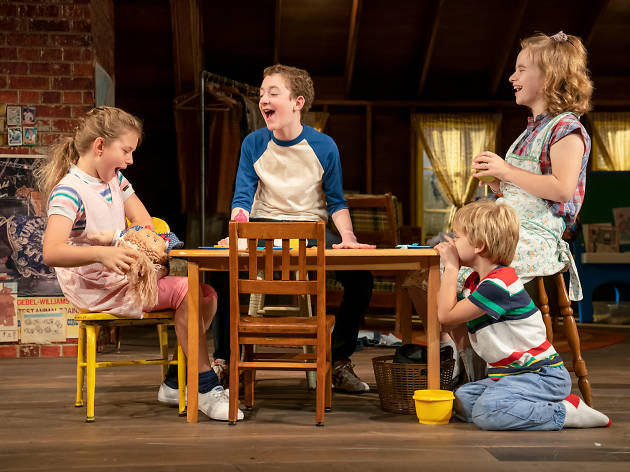 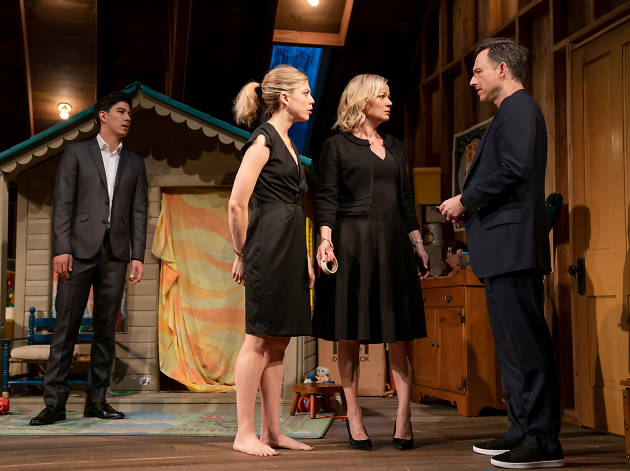 It’s the oldest strategy in the dramatic playbook: the “retrospective” plot, in which a buried secret is dug up and brought into the light. This most typical of storytelling tactics relies on surprise, but over the millennia the structure itself has become overfamiliar. That’s why Bess Wohl’s Make Believe has such freshness: The writer has found a new way to cut old cloth.

In a rare and daring move, Wohl actually starts with the traumatic childhood. Make Believe’s long first section takes place in an attic in the 1980s, with the unsupervised Conlee kids—doll-dandling Addie (Casey Hilton), officious ten-year-old Kate (Maren Heary), volatile preteen Chris (Ryan Foust) and wordless little Carl (Harrison Fox)—playing house. Their father is away on a trip, and their mother has not come home for several days. Pretending to be a functioning family grounds them at first; despite the terror of their situation, the massive playroom seems like a fantasy. Kate and Chris bicker as though they were in a half-remembered Honeymooners episode; they eat candy for dinner, and run around with sheets over their heads, playing ghosts. Under Michael Greif’s direction, all four young actors are wonderful: Hilton and Fox are unaffected and sweet, while Heary and Foust play darker notes with the confidence of actors four times their age.

We eventually meet their grownup versions—who learn, abruptly, the truth of their childhood situation. Here Wohl loses her dramaturgical cool: The dreamy time flow of the children’s scenes turns into a conventional shocks-at-a-funeral story, and only Susannah Flood, as the grown Addie, manages to hang on to some of the strangeness and mystery of the early section. Wohl’s inverted structure continues to work for her, though, and the effectiveness of the play’s climax lies mostly in recalling the seeming innocence of the younger characters. “This is just our childhood,” the young Chris tells his siblings in the first half, “We are not even going to remember most of this stuff when we grow up.” The trick of Make Believe is in how the play makes us remember Chris’s words, and how increasingly painful it becomes to realize how wrong and right he was.