Since The Walworth Farce in 2008, St. Ann’s Warehouse has been administering nearly annual doses of experimental theater by the prolific Irish playwright and director Enda Walsh, with side effects ranging from confusion and fatigue to rapid mood swings and euphoria. “I’ve been writing the same play for 25 years,” Walsh acknowledges in the program for his newest opus, Medicine. “Well, the same type of play in ever so slightly different forms.” As in such past works as Disco Pigs, Ballyturk and Arlington, the primary focus is on the operations of storytelling within an enclosed world—in this case, a mental hospital, where a long-term patient named John (a touching Domhnall Gleeson) undergoes a strange form of dramatherapy with two visiting professional actors and a live, loud drummer.

For the pajama-clad John, a gentle person with a poetic inclination who does not know why he has been committed except that he is “not like other people,” this session represents a rare chance to try to understand his situation. For the actors, who are both named Mary and who wear t-shirts with the logos of Broadway musicals, it is a gig. Mary 2 (Clare Barrett)—who enters in a hilarious lobster costume that she will be wearing later for a children’s party—is a bulldozer of self-regard: “What’s the first rule of acting? ‘Be important,’” she advises the more modest and thoughtful Mary 1 (Aoife Duffin), who also functions as the sound operator. Their script, prepared by John and edited on the fly by Mary 2, visits key scenes of trauma from his past: his neglectful parents, a sinister incident in the woods, an abusive guard at the facility. The Marys shift through various roles with frequent changes of costumes and wigs but without much regard for their increasingly desperate and isolated patient.

The very fine cast, imported from Medicine’s premiere productions in Edinburgh and Galway earlier this year, handles each whiplash turn with admirable precision and aplomb. The play unfolds at various levels of frenzy as percussionist Seán Carpio bangs out jazz noise that eventually rises to a deafening climax; along the way there are interludes of pop music—Brenda Lee’s “Emotions,” Aaron Neville’s “Tell It Like It Is,” Earth, Wind & Fire’s “September”—as well as a plethora of voice-overs and surreal comic effects (including a gale wind that blows from a back room). As skeptical as Walsh may be about the treatment he elliptically depicts, he understands the value of theatricality. Medicine is sorrowful at its core, but spoonfuls of colorful sugar help make it go down. 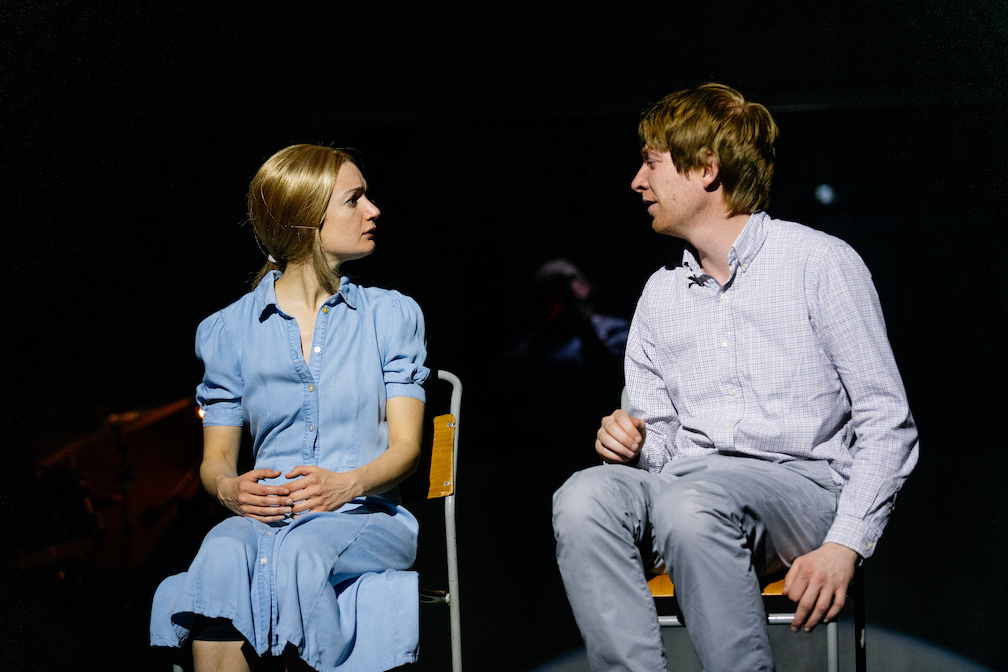