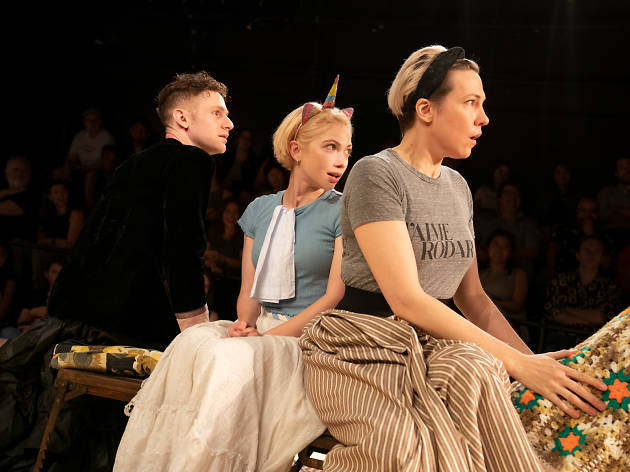 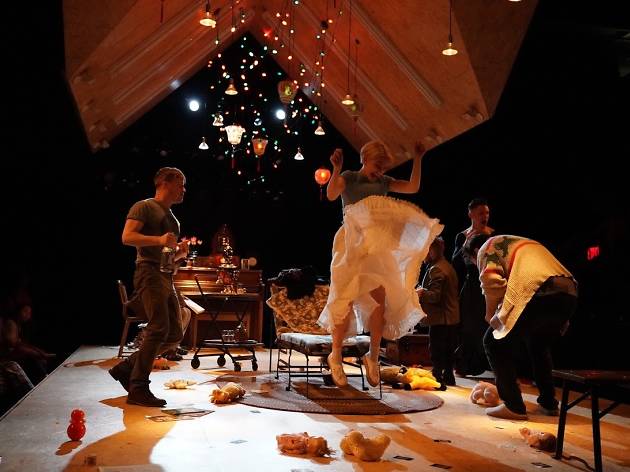 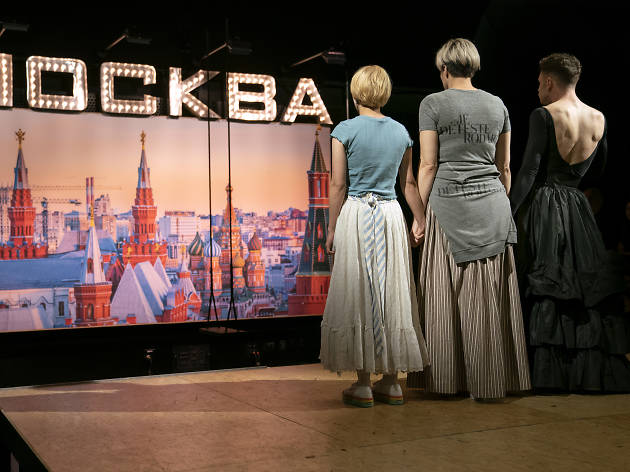 When Anton Chekhov described his plays as comedies, he didn’t mean they should be played for big laughs. Up close, his bittersweet group portraits of Russian families in decline can look tragic: full of unrequited or impossible loves, of dreams denied, of fortunes squandered and trusts misplaced. Their humor, such as it is, comes from a sense of distance—from the plays’ wry survey of what fools we all-too-humans be. Halley Feiffer’s Moscow Moscow Moscow Moscow Moscow Moscow, a cutting and often hilarious riff on Three Sisters, takes a different approach. Distance be damned: Feiffer grabs Chekhov’s masterwork by the ears and yanks it right up into our faces.

In this adaptation, directed with furious flash and clamor by Trip Cullman, the setting is still a small Russian town circa 1900, but the characters dress and speak in a merciless sendup of Millennial fashions and attitudes (“What the actual fuck is up with you today?”); the characters are constantly talking over each other when they aren’t shrieking in unison. Subtexts are dragged up to become the jokes, and the central siblings are more trapped by themselves—their entitlement, ironic deflection, self-pity, self-indulgence—than by their circumstances. “That’s what life is, I think?” says Masha. “Just…doing horrible things? And complaining about them?” They want to move to Moscow, but they can’t—they seriously just can’t with this right now.

Sustaining this tone for a full play is a major challenge to which Cullman’s cast proves eminently well-suited. Tavi Gevinson, Rebecca Henderson and Chris Perfetti (in drag, but barely) are a savage hoot as the childlike Irina, the sour Olga and the self-dramatizing Masha, respectively. Greg Hildreth is their weakling brother; Ryan Spahn, in a Cats sweatshirt, is Masha’s dorky, doting husband, and Alfredo Narciso is the seriously handsome (and handsomely serious) man she loves. The wonderful Steven Boyer is the ineffectual Baron, who wants to move past the friend zone with Irina; Sas Goldberg goes for blood as the social-climbing Natasha, who is bullied into tyranny.

Because Feiffer is fond of shorthand and impatient with exposition—there are many good jokes at its expense—the show shoots by in a riotous 95 minutes. Yet the bones of Chekhov’s play are there, and somehow they still do their work. Having laughed at and with the shallowness, the vulgarity, the pathetic brattiness of these people, you may be surprised to find, by the end, that you care about their feels. The show has a sense of the tragic after all. Isn’t that funny?