Is it safe to go back to Broadway? It doesn’t feel that way at Antoinette Chinonye Nwandu’s bold and impassioned Pass Over, the first play to open on the Street since the shutdown began last March.

I’m not talking about COVID protection, which is taken seriously at the August Wilson Theatre; members of the audience must provide proof of vaccination at the door and remain masked throughout the show. I mean that Pass Over is not a play that plays it safe. It’s a risky enterprise—a serious non-musical show, opening in the summer amid a public-health crisis—and although Pass Over deals with questions of escape, it is far from escapist entertainment. On the contrary, it grapples head-on with issues that have riven the country during the past two years: police violence, systemic racism, financial inequality. The concept of plague figures centrally.

The two main characters are a pair of young Black men who banter and sleep on what appears to be a desolate slab of city street. The compact and intense Jon Michael Hill plays Moses, who dreams of liberation from a land that has never delivered on its promises. The looser, ganglier Namir Smallwood is his friend and foil, the raggedy and moon-eyed Kitch. This Vaudevillian pair passes time by imagining better lives—Moses’s wishes are humbler, Kitch’s more materialistic—and exchanging dark running jokes. (“Yo kill me now,” says Moses. “Bang bang,” Kitch replies.) But their interplay, which includes bits of song and dance, is periodically interrupted by unseen authorities; at those moments, they freeze and assume compliant positions as the soundscape blares with white noise. 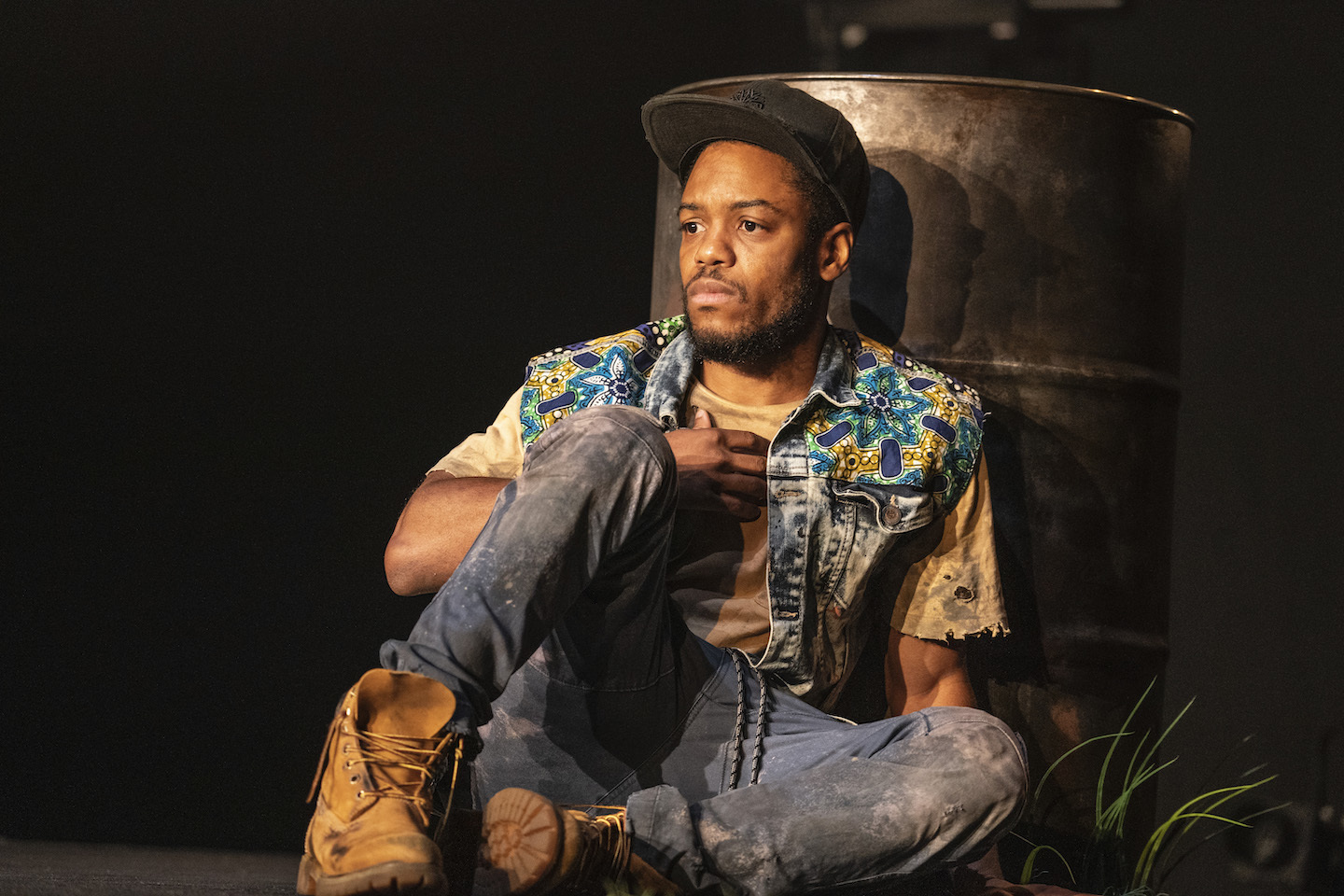 The template for Pass Over is Samuel Beckett’s Waiting for Godot, with a lamppost standing in for Beckett’s famous lone tree. As in Beckett, the tramps’ extended loitering is mercifully leavened by comedy, and the action takes place in no straightforward place or time. It would be a mistake to take the play as a literal depiction of modern ghetto life; the spare urban world evoked by Wilson Chin’s set and Sarafina Bush’s costumes is explicitly blended in the script with biblical Egypt and the antebellum South. (“We gon git off dis here plantation,” says Moses. “Git up off dis block.”) And although a policeman appears on stage in a modern uniform, he is depicted more like a 19th-century patrolman for potential runaway slaves.

This cop, called Ossifer, is portrayed by the gifted Gabriel Ebert, who doubles as Pass Over’s other white character: Mister, a wealthy fellow with a creamy linen suit and an air of befuddled gentility, who says things like “Gosh golly gee” and—in the show’s most memorable sequence—invites Moses and Kitch to join him for a lavish feast he unpacks from his picnic basket. (The collard greens and pinto beans are served on a silver dish.) Here as elsewhere, director Danya Taymor emphasizes the play’s embrace of theatrical artifice. Her 2018 staging of Pass Over at Lincoln Center’s small Claire Tow Theater, with this same cast, was already more heightened than the 2017 production at Chicago’s Steppenwolf Theatre (a version of which was captured on film by Spike Lee and is now streaming on Amazon Prime). The Broadway version is broader still, including a more spectacular new ending.

This ending, which Nwandu has created in response to the evolving dialogue around Black lives in America, seems to me an improvement on the previous versions. I still have quibbles about some aspects of Pass Over as a whole. It is not dramatically safe, which I consider a virtue, but it is also, to my mind, not always dramatically sound: There are stretches that drag—in fairness, I feel the same way about Waiting for Godot—and others whose knowing deployment of clichés about Black and white Americans threatens to fall into them. (I also could have done without a creepy sexualization of frisking.) But if this urgent and provocative work is sometimes on-the-nose, a firm whack on the nose might be what the current Broadway moment demands. When I left the theater after the play, three policemen were standing on the street, and so were many small groups of audience members, in no hurry to leave, still processing and discussing what they had seen. That’s what theater can do. It’s good to be back. 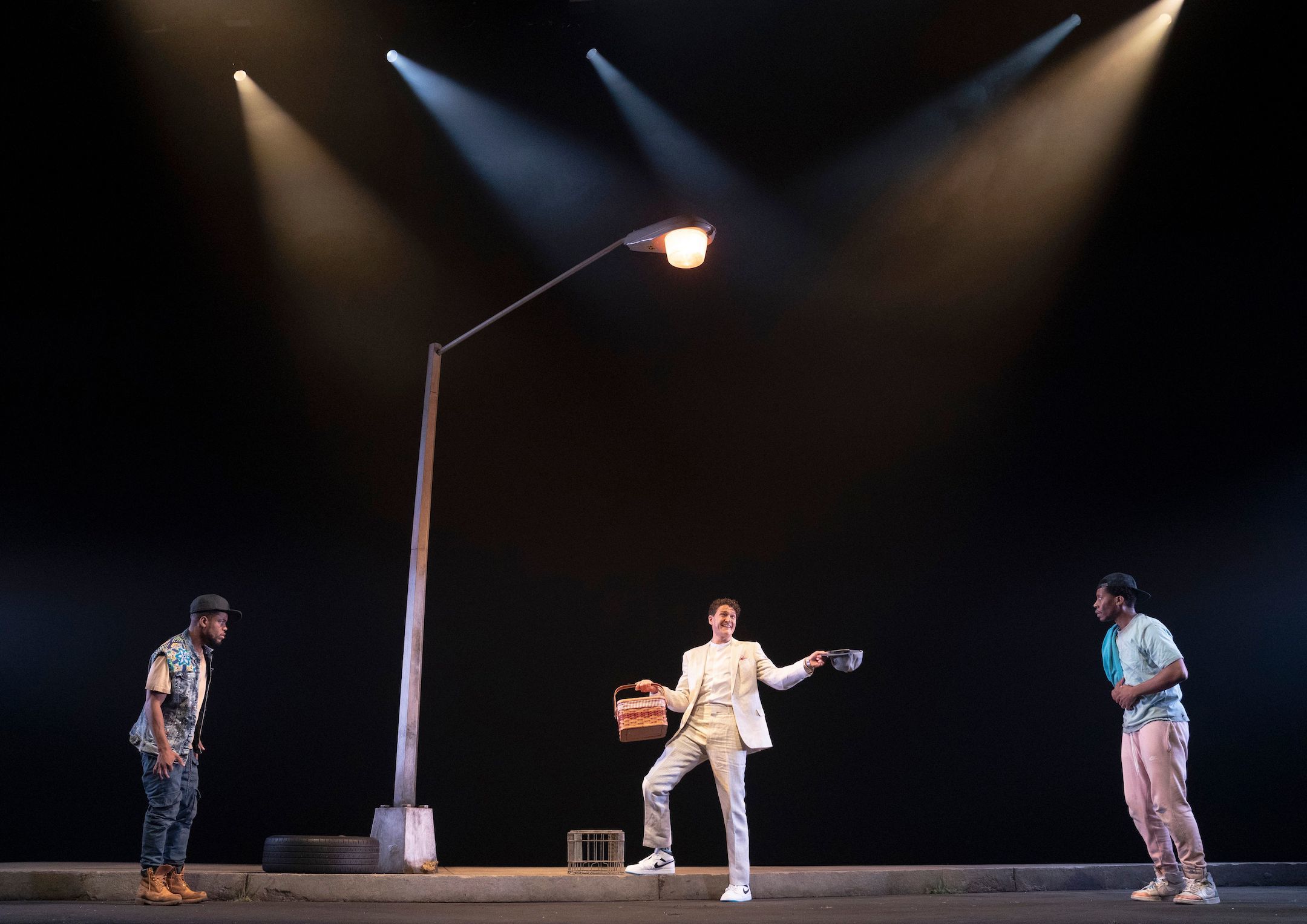