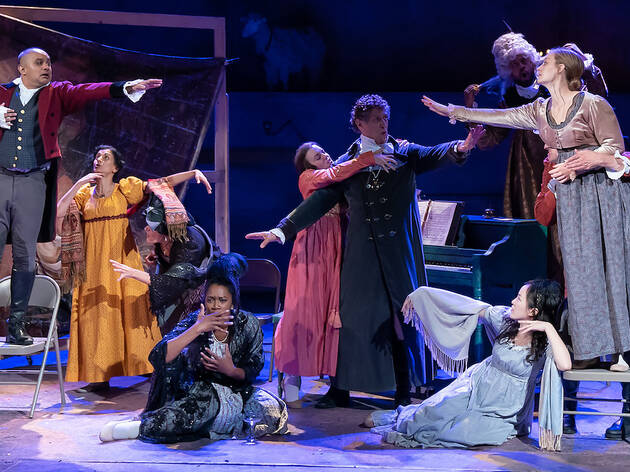 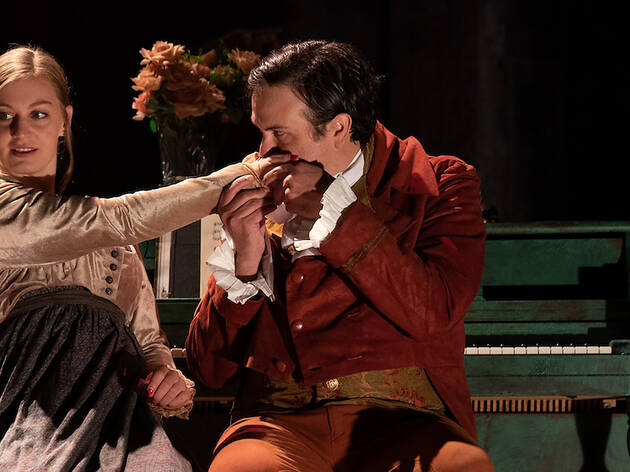 A romance that begins with a proposal has a circuitous road ahead. From the moment Captain Wentworth (Rajesh Bose) drops to one knee in the opening scene of Persuasion, it’s clear he’s the only one for Anne (Arielle Yoder). Still, she’s dissuaded from him by her relations, especially the overbearing Lady Russell (Annabel Capper), a proxy for Anne’s deceased mother. Fast-forward seven years, and a still-single Anne is dangerously close to spinsterhood by Regency standards—but guess who just returned a hero from sticking it to Napoleon? Even in the age-old tradition of marriage plots, the outcome of this fated union is more obvious than most.

So what’s a play to do? With its love plot sealed from the jump, Persuasion—adapted by Sarah Rose Kearns from the novel by Jane Austen—presents a gleeful if ultimately overstuffed exercise in diversion. This world-premiere production owes much of its theatrical appeal to the creative flourishes fans have come to expect from artistic director Eric Tucker and his acclaimed downtown company Bedlam, which has a knack for reinvigorating classic texts.

Beneath the Connelly Theater’s compact but ornate proscenium, actors whistle birdsong into standing mics to conjure the English countryside. The light clack of fingernails across a plastic vase suggests rain, as do squirts from a spray bottle into the face of an arriving dinner guest. Tucker’s sly hand with striking tableaus is aided by Les Dickert’s lighting and John McDermott’s shrewdly minimal scenic design.

The story is one of incidents—parties visiting this or that estate, dinners accented with occasional song, a rather silly young lady who climbs a wall and has a great fall—that have little consequence on the all-but-foregone ending. That may be just as well, because the action in Tucker’s frenetic production is sometimes hard to follow. Anne dotes on the Romantic poets, and her self-professed love of tragedy runs at odds with her happy fate, a paradox made evident by abrupt shifts in tone. One moment, she and Wentworth are cast in shadowy silhouette, beset by self-imposed challenges; the next, a full company of character-swapping players whirls sunnily around them.

Austen’s Persuasion lives especially close to its heroine’s point of view, so it makes sense that Yoder’s Anne often feels like the only fully formed person on stage. With the exception of Wentworth (a quiet, brooding type), most of the others in her orbit read as caricatures. The dizzying melee that carries Anne right back to where she started can be amusing, but it doesn’t always sweep us up.