Theater, Drama
Recommended
3 out of 5 stars 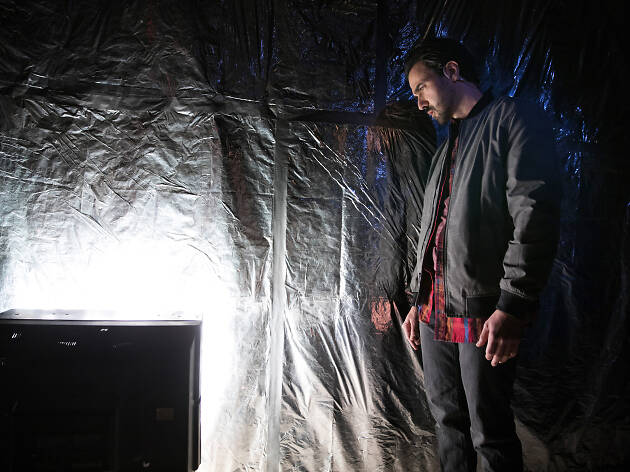 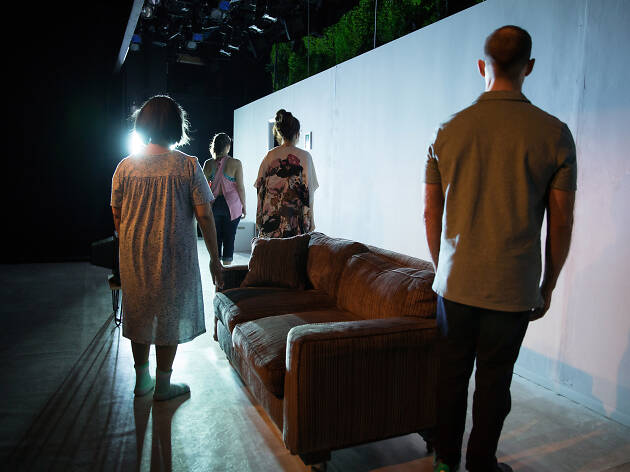 Jorge Ignacio Cortiñas has woven a delicate spider’s web in Recent Alien Abductions. His heartbroken thriller feels both gossamer frail and weirdly strong; even in a sometimes saggy production, it manages to snare your imagination. In its outline, it tracks a familiar tragic path: A man’s childhood trauma is slowly uncovered, clue by clue. But in its details and structure, the play operates as a postmodern hall of mirrors, full of hints that its fiction may be a real cry for help. An artist in the play, we are told, has delivered a monologue in an experimental New York theater as a kind of elliptical suicide note. But wait: Aren’t we watching a monologue in an experimental New York theater? What is actually happening here? Should we be concerned?

The Play Company production at Walkerspace serves the play—Cortiñas himself directed it—but as a writer, he hasn’t made the road easy. The first third of his 90-minute show is a retelling of an episode of The X-Files, embroidered with paranoid conspiracy theories and murmured in hushed, intimate, sometimes soporific tones. As he talks to us, Álvaro (Rafael Sardina) is lit only by a flickering television set; he stands inches from the front row. Somehow he manages to tie Fox Mulder’s televised adventures to the Puerto Rican independence movement, suggest paranormal sympathies between the fictional characters and his childhood, and point to an unrevealed but still open wound.

The second act takes place in Puerto Rico, where Álvaro’s tyrannical brother, Néstor (Daniel Duque-Estrada), is refusing to help Álvaro’s friend, Patria (Ronete Levenson), publish Álvaro’s work. Why is she there? Where has Álvaro gone? And why do the women in the house—mother Olga (Mia Katigbak), wife Ana (Vivia Font) and neighbor Beba (Yetta Gottesman)—seem so on edge? As the menace in the house builds towards violence, we wonder what happened to the gentle, worried performance artist talking about The X-Files.

The energy drain of the first thirty minutes is a problem—it’s hard to hold an audience with a half-hour monologue, and harder still when the person delivering it is deliberately suppressing his charisma—and rhythmically, the production still seems to be finding its footing. Cortiñas wants a drained, stylized aesthetic; for instance, characters go stone-faced and strange right at the end of their scenes, like bodysnatchers relaxing their guard. This didn’t quite work on the night I saw it, but perhaps the cast simply needed a few more performances under its belt to ease into the general air of dread. Cortiñas’s system of intersecting moods is in a fragile balance; if the pressure in the room had been slightly different, or if the air had been a touch cooler, the atmosphere might have coalesced as it was meant to. Conditions weren’t quite right when I saw it, but I would recommend it nonetheless—just in case the fog has rolled in.