The Skin of Our Teeth

Antrobuses! Meet the Antrobuses! They’re a modern Stone Age family of sorts in the first act of The Skin of Our Teeth, Thornton Wilder’s still-outré 1942 parable about, well, just about everything. Mr. Antrobus (James Vincent Meredith) enjoys modest renown as the inventor of the wheel; now he lives with Mrs. Antrobus (Roslyn Ruff) and their two children, Henry (Julian Robertson) and Gladys (Paige Gilbert), in a comfortable 1950s suburban New Jersey home that also accomodates a mammoth and a brachiosaur, whose adorable puppet head is set atop a long articulated neck. It’s all going swimmingly for this “typical American family”—except, of course, for the giant wall of ice that has descended from the North and now looms over their yard.

Wilder’s unwieldy epic, which is being revived at Lincoln Center in an eye-popping production directed by Lileana Blain-Cruz, telescopes human experience into a transhistorical study of cycles of destruction and survival through the ages. In the second act, the action inexplicably moves to Atlantic City in the 1920s, where hedonism runs rampant—there’s a giant slide in the background, and actors sometimes go zooming down it—and a fortune teller (Priscilla Lopez) warns of an impending flood that will wipe the world clean. The third act, again with no explanation, takes place in the ruins of a devastating war, with father and son on opposing sides; in this production, they are dressed in the blue and grey uniforms of the Civil War. And have I mentioned yet that the Antrobuses are also Adam and Eve, and that Henry is Cain? Or that in the midst of all these larger crises, this nuclear family faces meltdowns on a much smaller scale, triggered by infidelity and rebellion? 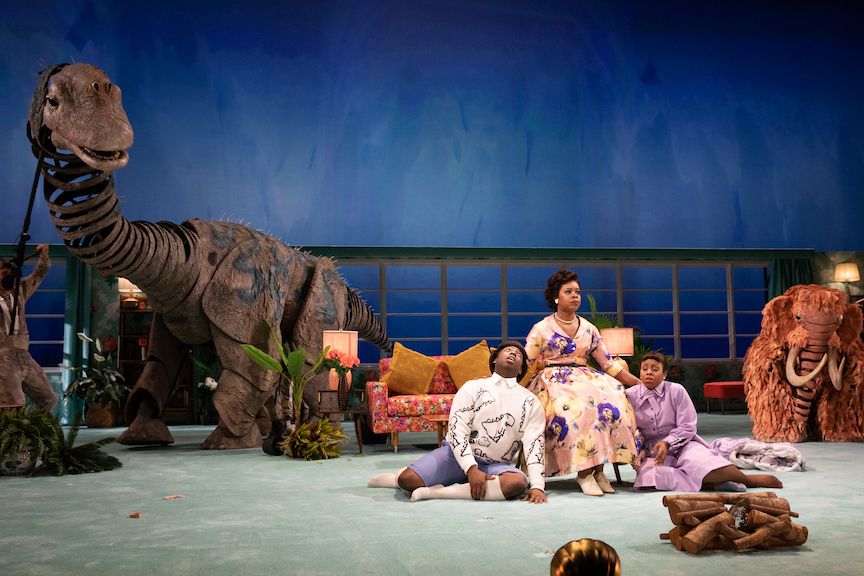 The Skin of Our Teeth | Photograph: Courtesy Julieta Cervantes

Careening between portentousness and goofiness, The Skin of Our Teeth broke more or less every theatrical convention possible back when it was new. The fourth wall, for one thing, is battered to rubble: Early in the play, the actress playing the Antrobuses’ maid, Sabina (Gabby Beans), breaks out of character—in this act, Sabina is a kind of manic Eartha Kitt—and turns to the audience to carp about her job. “I hate this play and every word in it,” she says. “Besides, the author hasn’t made up his silly mind as to whether we’re all living back in caves or in 1950s Jersey, and that’s the way it is all the way through.”

Based on the number of empty seats at the Vivian Beaumont Theater after the intermission between Act II and Act III—there is also a pause between the first and second acts—many people share her mixture of confusion and dismay. The Skin of Our Teeth was ahead of its time in 1942 but is not ahead of ours; although the text has been tweaked by Branden Jacobs-Jenkins—a quote from Aristotle, for instance, has been replaced with one from bell hooks—it often seems dated, even when the material is startlingly applicable to our particular moment in time. (When a stage manager steps forward to announce that the company has been ravaged by illness and understudies will be stepping into their roles, you may think that’s a new addition to the text. It is not.) The repetition gets numbing, and the conceit wears out; by the third act, you acutely feel the nearly three-hour length.

I’m not sure that any revival of The Skin of Our Teeth can really work anymore. But for theater lovers, this one offers a rare chance to see Wilder's Pulitzer Prize–winning curiosity as an all-out extravaganza, with nearly 30 actors—the always superb Roslyn Ruff is a standout—and a vividly imaginative staging. Blain-Cruz does her best to keep the audience engaged with a host of video and scenic effects, and the designers—Adam Rigg (set), Montana Levi Blanco (costumes), Yi Zhao (lighting), Palmer Hefferan (sound), Hannah Wasileski (projections)—more than pull their weight. No one but Lincoln Center would do this for such a difficult, arguably unstageable play; it’s like an Encores! production on a massive scale. Again: There’s a dinosaur! Perhaps this is a case of theater makers so preoccupied with whether or not they could revive The Skin of Our Teeth, they didn't stop to think if they should revive it. But as vexing as the show sometimes is, I’m glad that they did. 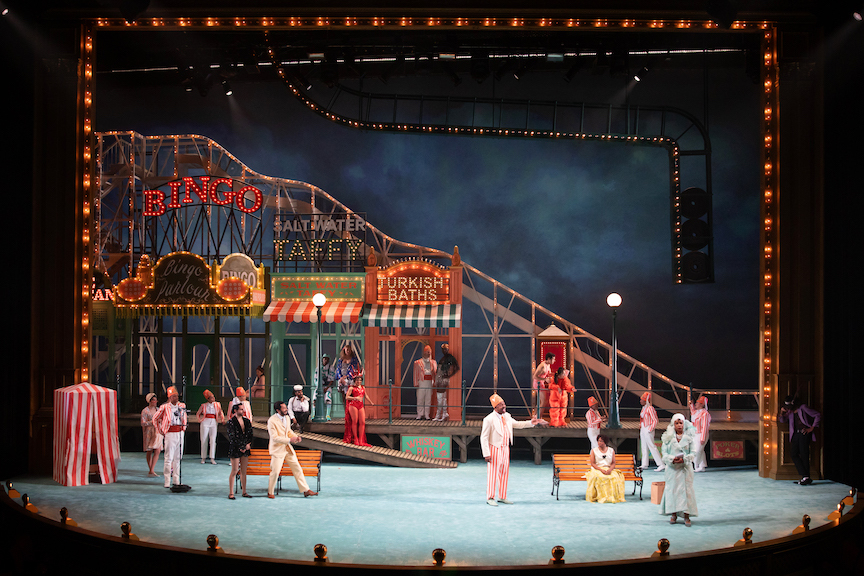 The Skin of Our Teeth | Photograph: Courtesy Julieta Cervantes 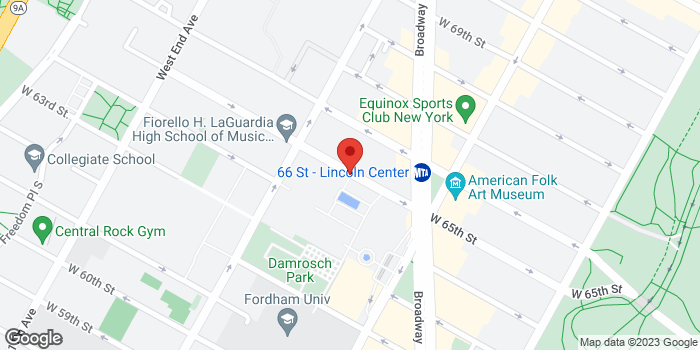