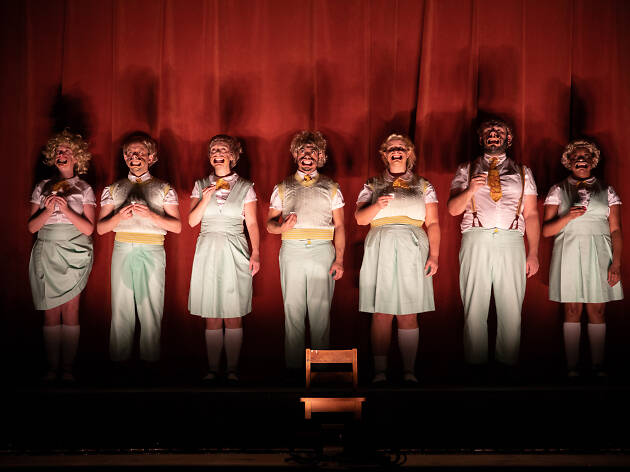 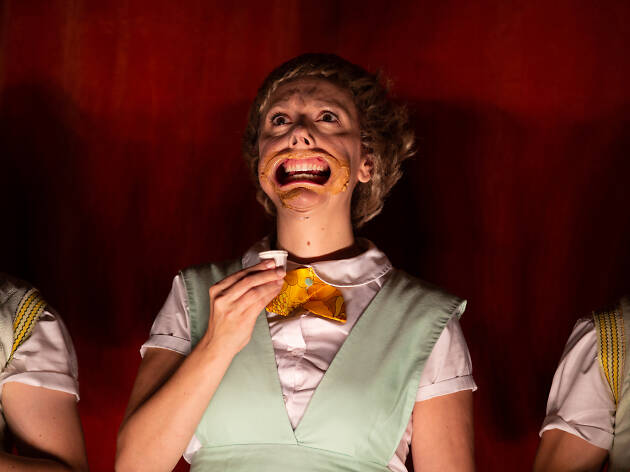 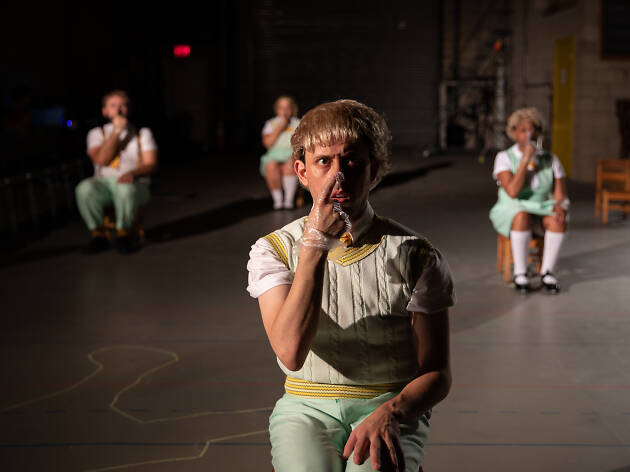 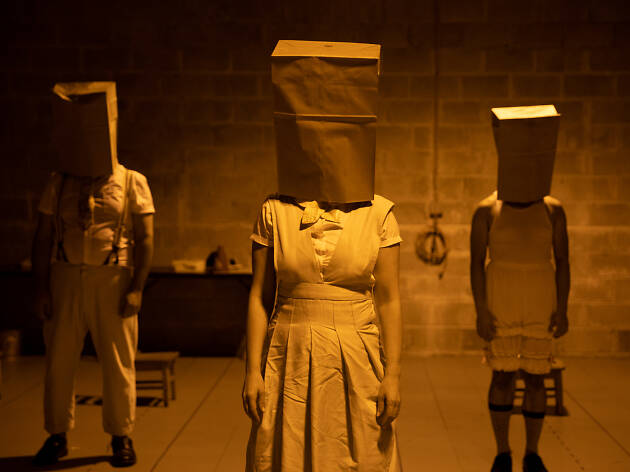 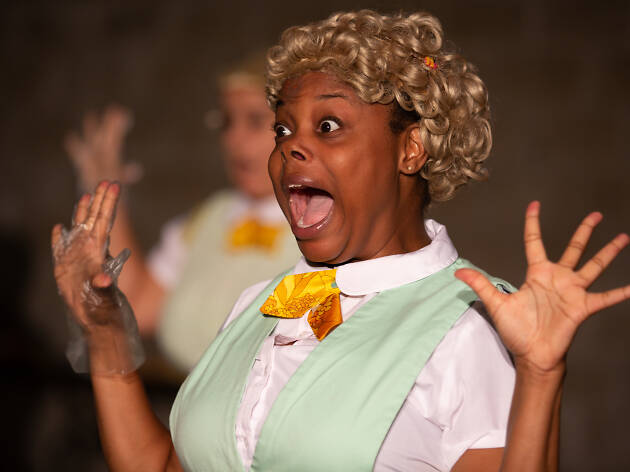 For about 75 delightfully repulsive minutes, you’ll regret your childhood. Depending on how close the actors get to your row, you may regret the entire concept of children. The latest show in New York Theater Workhop's NextDoor series, Skinnamarink burlesques the first-grade experience, unseals old pleasures you might have forgotten (which may involve peeling scabs) and offers a damning critique of the way we teach the young. I don’t want to oversell its qualities: It’s a daffy show. But the downtown ensemble Little Lord tends to make the kind of seeming silliness that worms into your brain and comes out to play long after recess is over.

The theater has been dressed as a schoolroom. Set designer Marika Kent has found the exact rusty-red curtain from your elementary school, and the floor is covered in the lines you remember from handwriting workbooks. High up on each wall are the two suns of every classroom: the clock face and the intercom, both in pale golden spotlights. The actors of the Little Lord ensemble, directed by Michael Levinton, strap themselves into just-too-small green sweater vests and pinafores, and tilt their faces up expectantly. As the P.A. system (Kate Weber) directs them thither and yon, they eagerly take part in dictated exercises and “snacktivities,” learning to obey.

Levinton and his wild-eyed group use McGuffey’s Eclectic Readers—a standard in American schools since the 1830s—as their source material, but we’re never entirely sure when they’ve departed from the lesson plan. “What are in the eggs?” seems like it probably comes straight from McGuffey. But when the children chant about being better than animals, or about going keto? Unlikely. The play gets its rough energy from watching these slimy, messy “children” (who smear their cheeks and beards in peanut butter) try to fit into the regimentation of their training. The students are awful, but the pedagogy is scary too. Teaching kids seems like trying to push slugs into snail shells; the globbiness fights back.

The Little Lord gang has made a number of weird plays over the last decade (Bambif*cker/Kaffeehaus was a highpoint), but this one is, by design, its most disciplined. In the years since its founding in 2007, Little Lord has managed to keep an admirable level of terroristic mayhem in its work—a zany overmuchness that experimental theater needs like oxygen. Here we see what happens when the company also plays with rigidity and ritualistic action, and the clash between their chaos and McGuffey’s order is both interesting and productive. Be warned, though: Skinnamarink is a horror show that takes old nostalgic objects (songs, games, nut-related snacks) and turns them nasty in your mouth. Remember the time you ate chalk? Or the time you thought Crisco was icing? This play will make you feel like a child again, whether you like the taste or not.