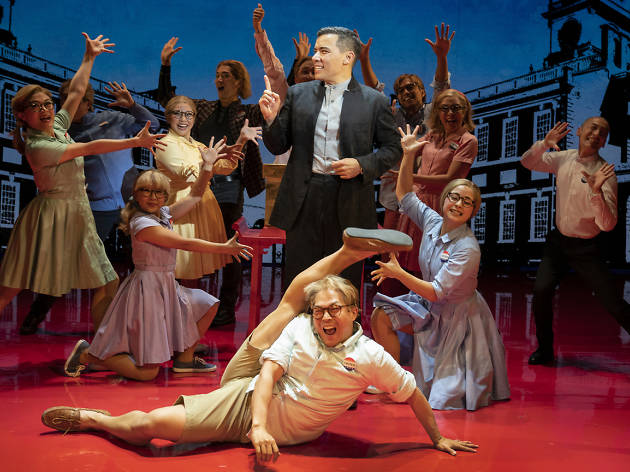 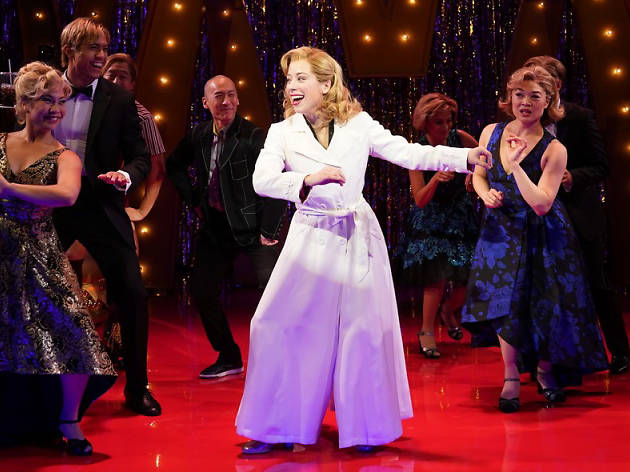 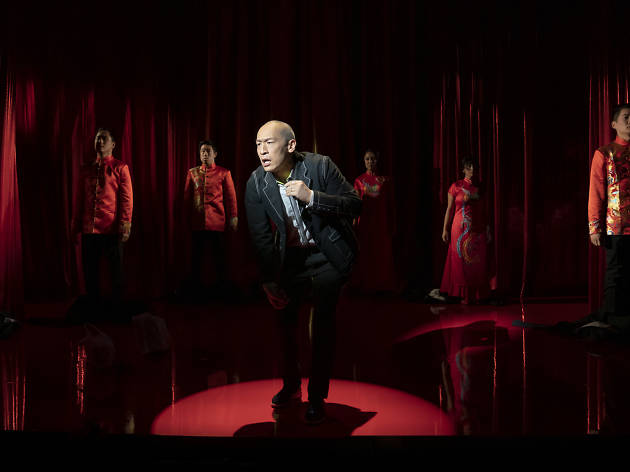 Notwithstanding its huge dance numbers, roller-skating chorus boys and big 11-o’clock breakdown number about democracy, the best scene in Soft Power is… a panel. Halfway through David Henry Hwang and Jeanine Tesori’s jam-packed satire, the curtain rises on a row of academics in the not-so-far future, talking about the musical we’ve been watching. Chinese experts discuss how the musical “originally” captured the gun-crazy United States in its twilight years, and note, in particular, how accurate it was. Accurate? It includes a 2016 Hillary Clinton (Alyse Alan Louis) campaigning in a Wonder Woman leotard and falling head over heels for a Chinese musical-theater producer, Xūe Xíng (Conrad Ricamora), who then convinces a quartet of high-kicking Kellyanne Conway look-alikes to cede control of the U.S. to China. Maybe it’s more about the feeling of the 21st century? The academics nod and contextualize and condescend to the panel’s token American guy, who has been brought in only so that “the second world” can be represented.

This short panel scene is Soft Power at its tartest: It’s turnabout Orientalism as fair play. Hwang’s language eviscerates racist Western discourse about Chinese art; it makes its points swiftly but with a cleaver. The rest of Hwang and Tesori’s piece, though, keeps tripping on the narrative frames that are hung around its neck. For one, there’s the story of playwright Hwang himself (Francis Jue), trying to write a musical for the Chinese market but running into cultural hurdles with his producer Xíng. There’s also the real story of Hwang’s stabbing attack—still unsolved—and the blood loss–inspired hallucination he has as he collapses on the steps of a Brooklyn hospital. His fever dream then has its own metastructure, which includes the panel that opens Act II.

All three framing stories set up the through-the-looking-glass version of The King and I that takes up the bulk of the second act. (Xíng isn’t an English nanny and Hillary didn’t get to be king; otherwise, there’s overlap.) But the awkward first 30 minutes of Soft Power aren’t musical at all, and we can tell from all the throat-clearing that the team feels hesitant about jumping into such a wild-spirited spoof. The Hwang character insists he’s good at writing personal relationships, yet this half hour of conventional drama falls short on that front. When Tesori’s lush music starts, the play sighs with relief: Nothing, it turns out, buoys your post-2016 spirits like an orchestra in full swoon.

Maximalism is both the show’s strength and its weakness: Soft Power is as stuffed as a ballot box. (In fact, there’s a very funny song about the electoral college in which director Leigh Silverman and choreographer Sam Pinkleton have the chief justice pushing a giant gold ballot box on wheels.) There are some thrills in the show, not least the final image: a full-stage chorus line of the large,  nearly entirely Asian cast, singing its (broken) heart out about America. But the show still seems to be finding its feet, working out the order in which it wants to tell its story and Hwang’s place in it. A great deal of thinking has gone into Soft Power, as well as anger and despair. Now it just needs to discover its flow.