[Note: Take Me Out is returning to Broadway for an encore run this fall with Bill Heck as Kippy and the rest of the original cast intact.]

The multiple meanings in the title of Richard Greenberg’s Take Me Out give some sense of the play’s ambition. It refers, of course, to “Take Me Out to the Ball Game,” that carefree celebration of being part of a crowd. But it can equally be taken as a demand for acceptance from Darren Lemming (Jesse Williams), the Derek Jeter–like star outfielder of the fictional New York Empires who casually comes out of the closet at the start of the first act. It evokes, too, baseball’s capacity to let ordinary people, like Darren’s unathletic gay accountant Mason (a wondrous Jesse Tyler Ferguson), connect with the larger world and escape their daily lives. The title also connects in various ways with events that occur later in the plot; more generally, it suggests the fraught process of revealing a private self to the public.

Nearly 20 years after its Tony-winning run in 2003, Take Me Out has returned to Broadway at Second Stage’s up-close-and-personal Helen Hayes Theater. Directed by Scott Ellis, it remains provocative, intelligent and engaging. Greenberg likes big words, big themes and messy complications. The civility and open-endedness of baseball—not to mention the sheer volume of stats—have always attracted contemplation, and Take Me Out enjoys tossing its ideas around. “Baseball is a perfect metaphor for hope in a Democratic society,” says Mason in one of several delightful flights of narration. “And baseball is better than Democracy—or at least than Democracy as it’s practiced in this country—because unlike Democracy, baseball acknowledges loss.”

This line, like many in the script, has aged surprisingly well; Greenberg has made only minor tweaks. At times, the words he places in the mouths of his jock characters do seem a little lofty for the locker room. The athletes in Take Me Out tend to be either hyperarticulate—like Darren and his best friends, the thoughtful Kippy (Patrick J. Adams) and the self-righteous Davey (Brandon J. Dirden)—or dumb as dirt, like Toddy (Carl Lundstedt) and Jason (Tyler Lansing Weaks). Shane Mungit (Michael Oberholtzer), a relief pitcher from the Deep South with a killer fastball and a traumatic family history, seems barely able to form words at all—and when he does let loose at a press conference, his racist and antigay comments cause a furor.

But Greenberg likes to throw curves. Ostensibly the victim, the gay and biracial Darren is no underdog, but an arrogant superstar who has led a charmed life. He is “young and rich and famous and talented and handsome,” and his enormous popularity stems not only from his gifts on the field but also from the fact that he is “a Black man who you could imagine had never suffered.” Sexuality is incidental to him; he does not believe that coming out will hurt him, and for the most part he’s right. But while Darren sees himself as a god, his announcement inevitably humanizes him, whether he likes it or not. The straight white bigot Shane, meanwhile, is in some ways a poignant figure, and a newly resonant one in the age of Trump. Uneducated, poor and violently orphaned, he is hard to dismiss as privileged. (The people who despise Shane’s slurs also deride him as a “cracker” and “white trash.”) The play’s investigations of class, race and masculinity seem as relevant today as they were two decades ago.

Ellis’s ensemble cast—which also includes Julian Cihi as a Japanese pitcher, Hiram Delgado and Eduardo Ramos as macho Empires, and Ken Marks as their manager—is a model of teamwork, with the main cast leading the charge. The role of Darren is challenging because the character is such a cipher (“I don’t have a secret, Kippy. I am a secret”), but Williams balances believable swagger with lovely shades of growing self-awareness. Oberholtzer brings high low-life intensity to his performance as the foolish Shane, and Dirden is a pillar of testy rectitude as the pious Davey. But Mason is by far the play’s best role, and Ferguson—warm, sweet and infectiously enthusiastic—is the show’s most valuable player. In every moment he spends onstage, with every perfectly timed aperçu, he wears the audience like a glove.

While Ferguson is the soul of the play, there’s also plenty of flesh: David Rockwell’s attractive set includes working showers, which are used twice. But Take Me Out’s lengthy male nudity is not just an excuse to stare at hunky actors. Greenberg’s point is that Darren’s homosexuality—or, more accurately, Darren’s revelation of his homosexuality—disrupts the thoughtless homosocial operations of the male world he inhabits. (“We’ve lost a kind of paradise. We see that we are naked,” observes Kippy.) If audiences feel as awkward with the naked bodies on stage as the athletes suddenly do, that is anything but gratuitous—it is the point of the scene. Take Me Out dramatizes the power of knowledge to transform our experience, for better or worse: The shower that had been innocent is now fraught with uncomfortable sexuality; words become springboards for puns and double meanings; a championship ring becomes recognizable as jewelry. With a twist of the wrist—a queering of the pitch—Greenberg takes a much-examined pastime and makes it a whole new ball game. 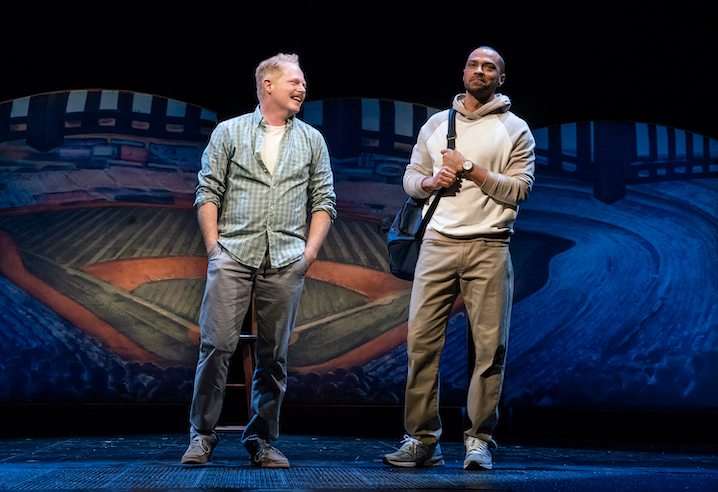 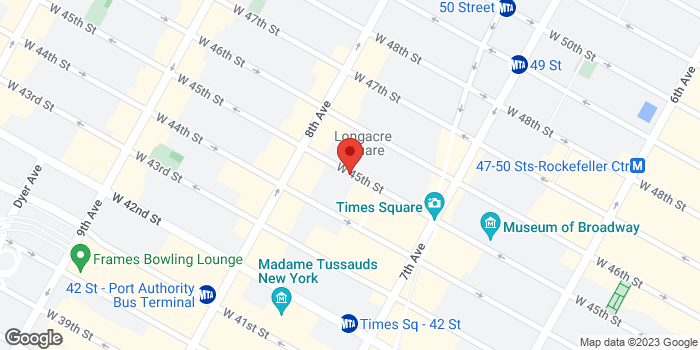