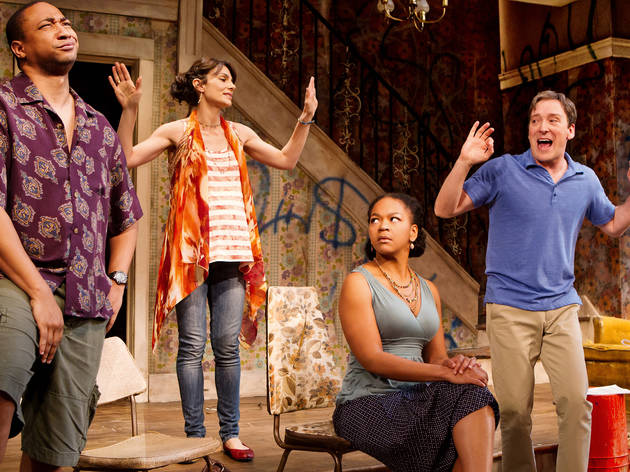 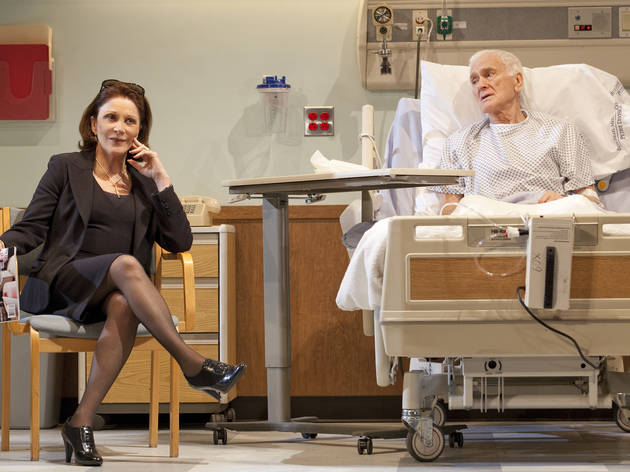 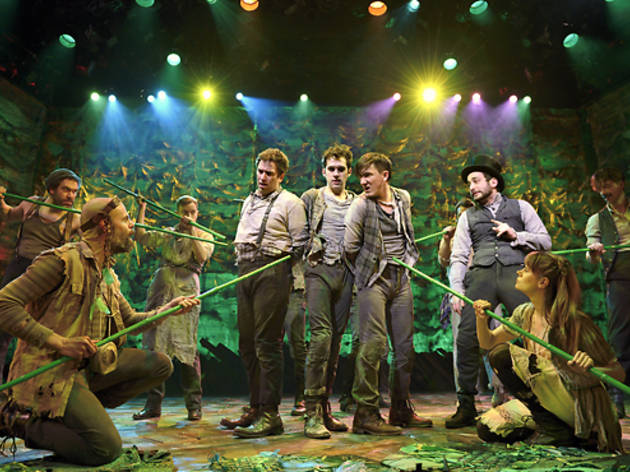 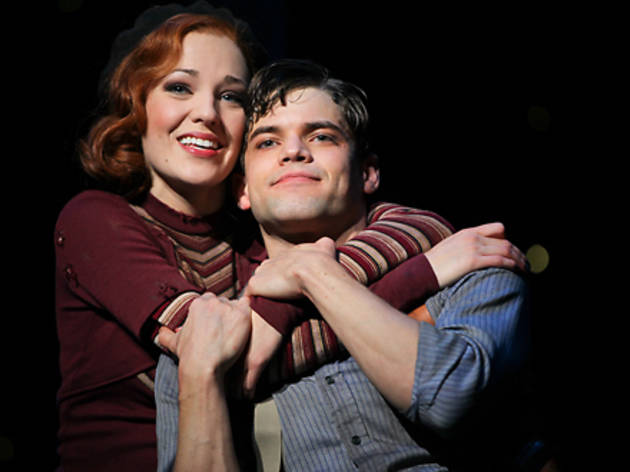 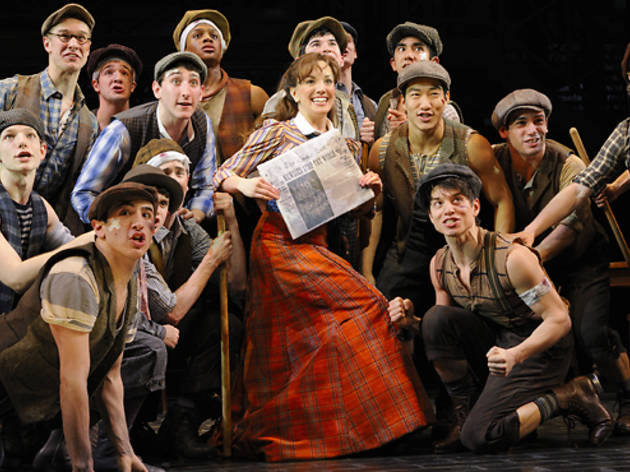 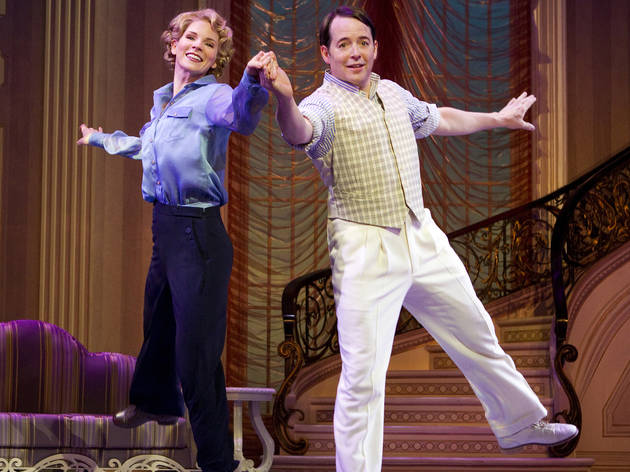 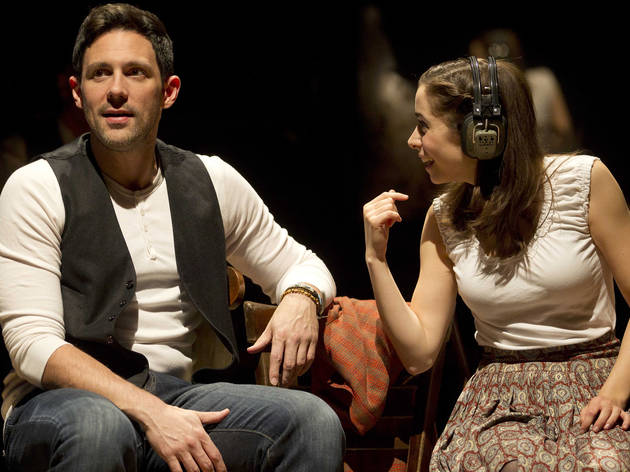 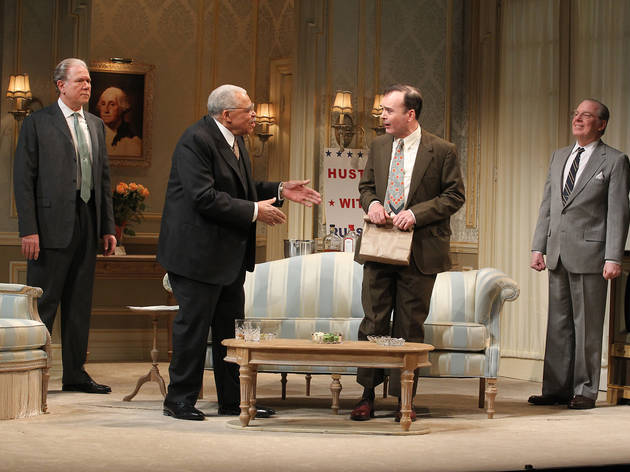 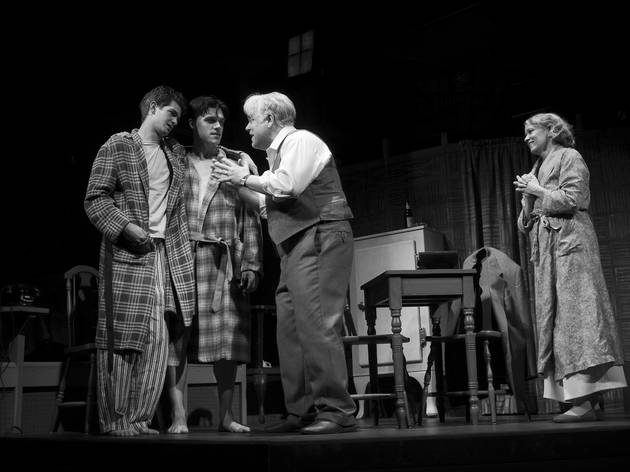 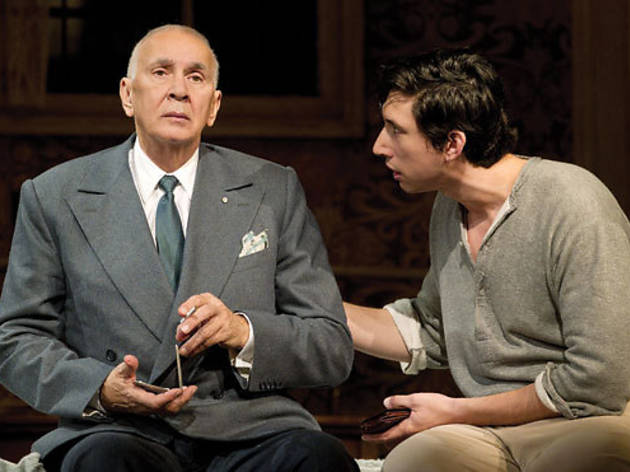 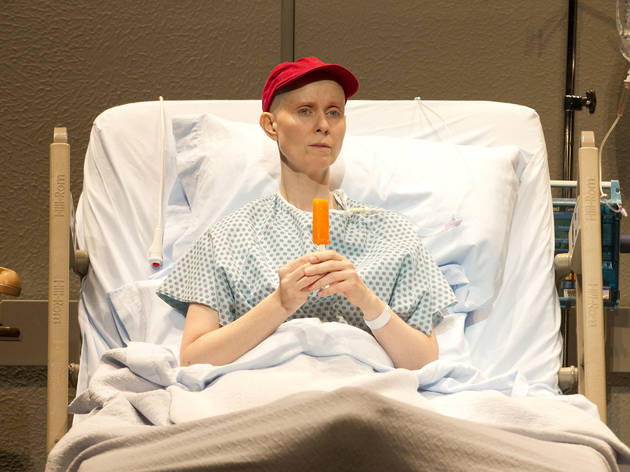 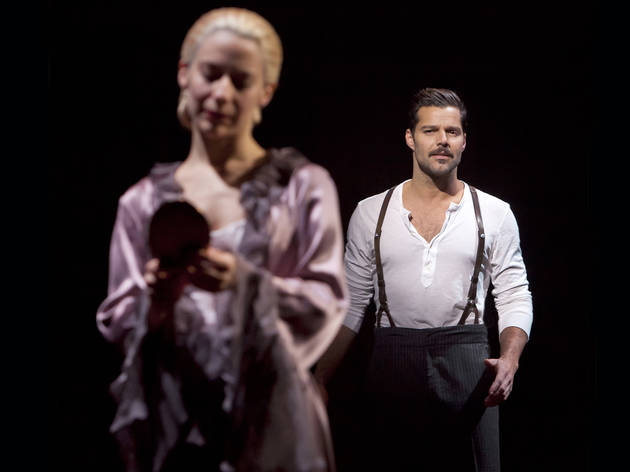 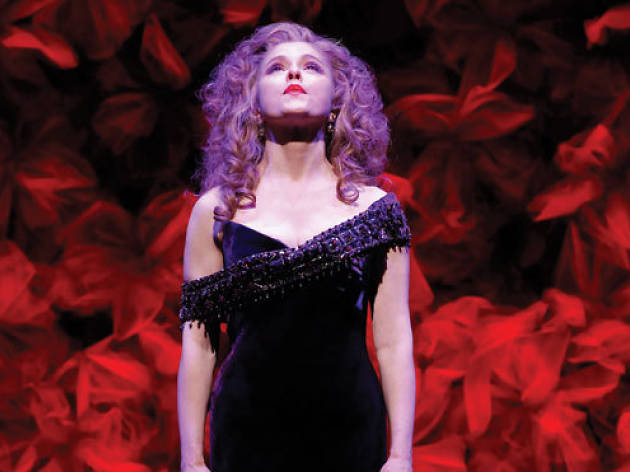 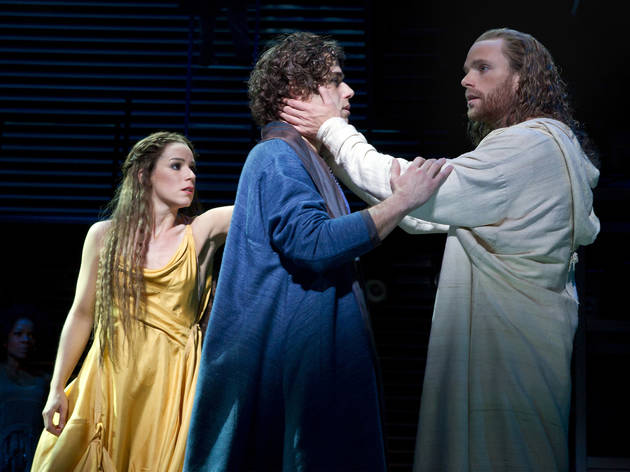 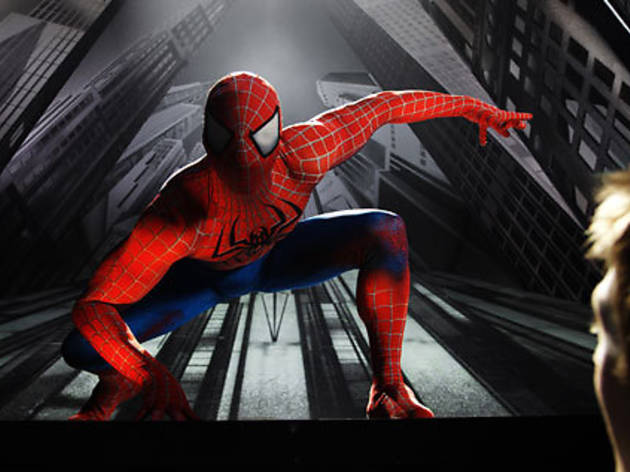 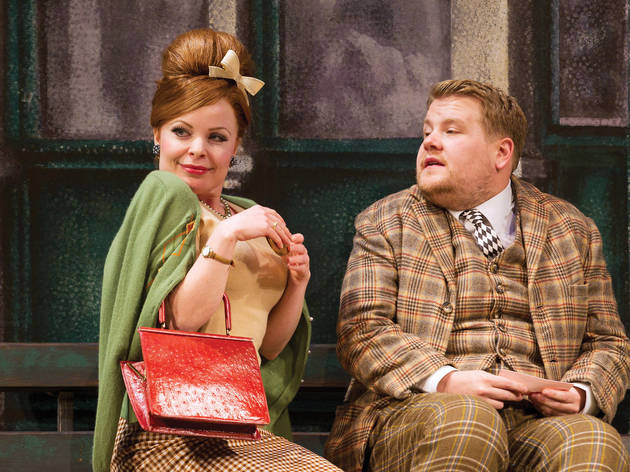 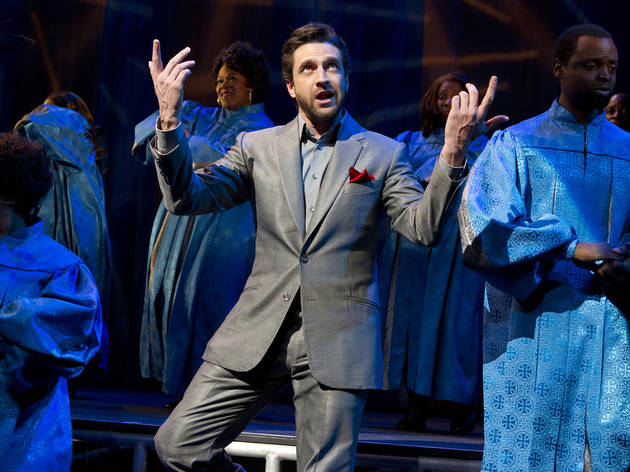 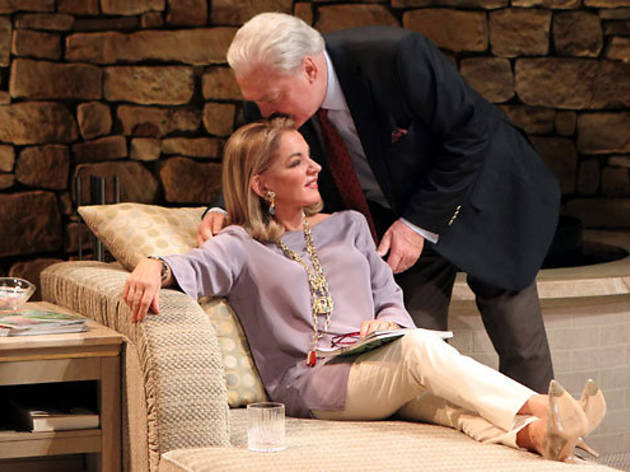 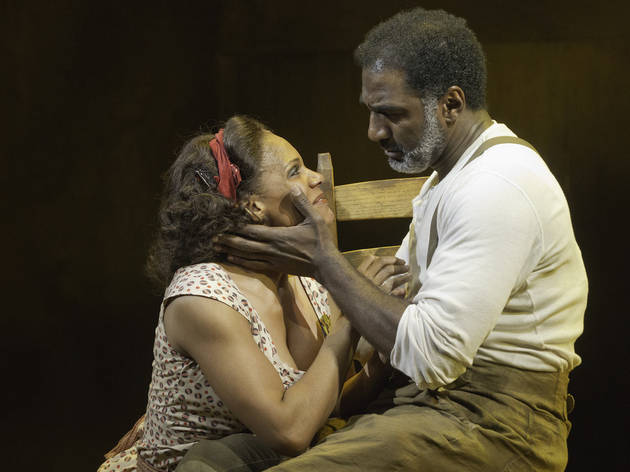 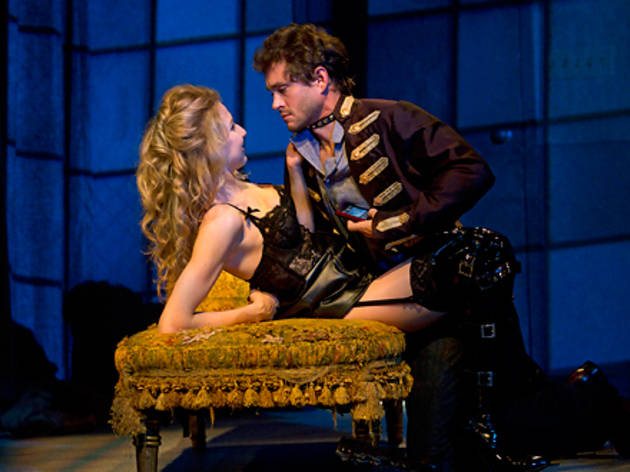 Tony has sung; what was the tune? Predictably (for a somewhat predictable season), the nominees recently announced by Kristin Chenoweth and Jim Parsons invite tea-leaf reading and pseudoscientific analysis: X was nominated because Y opened too early in the season and Z really deserved the nod a decade ago, so the nomination is a consolation prize, and so forth. Sure, a little of that deep reading might be valid, but the truth is probably more banal: super-close calls and pure laziness or ignorance, not to mention snobbish backlash (see Rebeck, Theresa, below). Here are some things we learned from the nominations:

Maybe Leap of Faith doesn’t suck so hard
The last show of the 2011–12 season seemed to bring out the ogre in most critics, inspiring a contest to see how much invective one could pour onto this gospel-and-country-scored adaptation of the 1992 Steve Martin movie. Tacky, wan, confused, repetitive and derivative were some of the nicer adjectives. And yet there it is, nominated for Best New Musical, squeezing out Bonnie & Clyde and Spider-Man: Turn Off the Dark. Nobody expects it to win, but perhaps now it won’t close so soon.

There really ought to be a Best Ensemble award
This is a perennial gripe among Tony watchers, but this year it really applies: create a new award for Best Ensemble in a Play (musicals are different beasts). Tony could have nominated Peter and the Starcatcher; Clybourne Park; One Man, Two Guvnors; and Seminar for such an honor, opening up room in the Leading and Featured Actor/Actress categories.

Tony hates Smash
We know that TV and theater are different worlds, but do you think Tony nominators totally snubbed Theresa Rebeck’s Seminar (including its original, fantastic star Alan Rickman) because they dislike another of her S-titled shows—namely, Smash? Don’t get me wrong: No one should be nominated for an award just because they have success in another medium (although that courtesy is extended to movie stars quite frequently). Sure, this season there were (wow) 14 new plays on Broadway, but Seminar deserved a nod.

Follies foolishness
Nice to see the gorgeous revival of Stephen Sondheim’s Follies (which opened this past September) remembered so much with eight nominations. But we have to quibble: Ron Raines has a lovely singing voice and some gravitas, but his stiff turn as Ben Stone was the production’s main weak link. Bernadette’s omission I understand (her acting and singing was quite uneven both times I attended), but Raines’s inclusion seems random. Good on Danny Burstein and Jan Maxwell, though.

Spider-who?
If the most craptastic musical on Broadway had been completely snubbed this morning, no one would be surprised. And indeed it was ignored in most of the major categories. But in Best Costume Design of a Musical and Best Scenic Design of a Musical, its visual components were acknowledged. We hope the family of the late Eiko Ishioka savors her posthumous honor. As for how the Tony race will affect the freakishly successful show, undaunted by critical pans and media derision: not a jot.

“Plays with music” like it both ways
How bad a season was it for original scores? It was so bad they nominated Frank Wildhorn. To be honest, Wildhorn’s Bonnie & Clyde was perhaps his best work, if the overall show was weak. If the score of Once had been deemed original enough (most of it comes from the 2006 movie’s soundtrack) it would be a serious contender, but it’s not. What’s interesting here is the fact that two plays—Peter and the Starcatcher and One Man, Two Guvnors—incorporate music to such an extent that they are filling out this race. What a coup if the jaunty skiffle tunes of the Craze, One Man’s in-house band, were to win. But we all know the safe money’s on Newsies.

Comedy wants to kick tragedy’s ass
James Corden’s hysterical mugging and physical pratfalls versus Philip Seymour Hoffman’s dying-oak stolidity and crestfallen countenance: If ever you wanted a full-body personification of the comedy and tragedy masks, here it is, in the Best Leading Actor in a Play category. The impossible race is between these two. Filling out the categories are several worthy character actors: Frank Langella, John Lithgow and James Earl Jones.

James Earl Jones leads—no matter what
Speaking of Jones, is his performance as former President Arthur Hockstader really a leading one? The venerable actor is wonderful in The Best Man, but this seems like a dubious call. It makes the snub for Alan Rickman hurt more.

Nicky Silver died a little bit inside
Everyone was a bit surprised when The Lyons transferred to Broadway from the Vineyard Theatre downtown. It’s a small comedy, by a beloved but hardly big-name playwright, but no one would equate it with box-office fire. Linda Lavin’s bitchily brilliant performance was the driving force. And sure enough, she got the nomination. But not the play. The Lyons was Nicky Silver’s Broadway debut and it would have been good to see the play itself acknowledged—rather than, say, Jon Robin Baitz’s Other Desert Cities, which I consider slick but highly overrated.

I will never be on the Tony-nominating committee
That leads me to the sobering (or comforting!) reflection that my critical tastes were not overwhelmingly reflected in the nominations this morning. I don’t quite get all the love for Once and Other Desert Cities, or the disdain for Seminar, or some of the Featured Role calls. But that, as they say, is what makes a horse race.