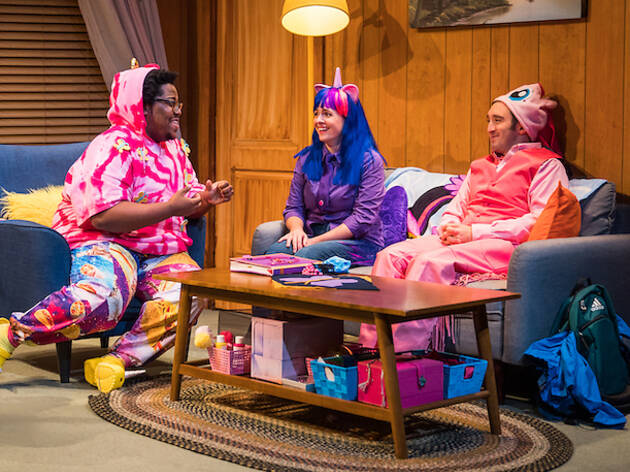 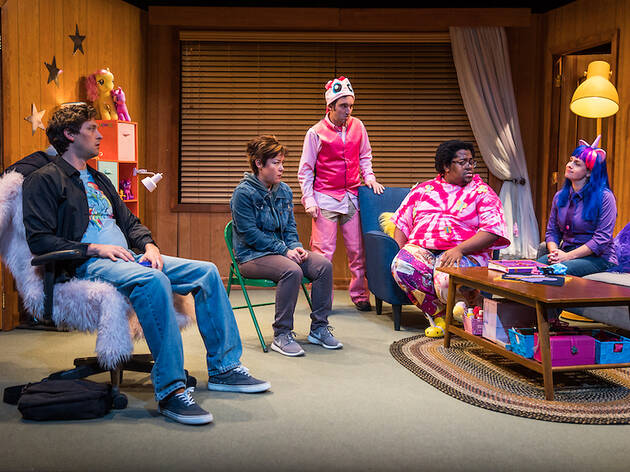 “Friendship is magic” is the motto of characters in both the animated children’s series My Little Pony and Eric John Meyer’s subtly chilling comedy The Antelope Party. A timely allegory of identity and belonging, Meyer’s story about a group of lonely outcasts reminds us that acceptance and community can indeed be magical—but sometimes magic can be dark.

The Bronies and Pegasisters of The Antelope Party are adults who assemble in a small apartment to indulge their secret love for My Little Pony, which is frowned upon in their Western Pennsylvania Rust Belt town. The simple pleasures of their sharing circle and role-playing games—surrounded by stuffed animals, action figures and posters of their favorite characters—exist in stark contrast with the violent threat of the local neighborhood-watch volunteers who loom outside, wearing trucker hats adorned with antelopes. (Kate Fry’s exuberantly bright Pony costumes create a similar clash with Yu-Hsuan Chen’s casually nondescript sets.)

The harmony of their meetings is disrupted when Pegasister Maggie (an assured Lindsley Howard) and Bronie Shawn (a subtly menacing Will Dagger) sign up to patrol the neighborhood, to the distress of Ben (Edward Maware, warm and inviting), Doug (Quinn Franzen, understated and effective) and Rachel (the quietly powerful Caitlin Morris). The story of converter’s zeal and corruption that follows—which includes whispers of cult indoctrination—will be familiar to anyone who has fallen down an Internet rabbit hole or grown wary of a power-hungry committee chair or condo board president. The parallels are apparent when the Bronies and Pegasisters encounter 9/11 Truther Jean (Anna Ishida), who attends one of their meetings by mistake.

Beneath its quirky trappings, The Antelope Party is ambitious material, if frustratingly ambiguous at times; the characters’ motivations are sometimes unclear, and hints of compelling back stories are not always fleshed out. But while the excellent ensemble cast, directed by Jess Chayes, elevates the production by finding humor in an all-too-relevant story, make no mistake: This little pony ride goes down some rocky trails, and things get pretty bumpy. Saddle up.