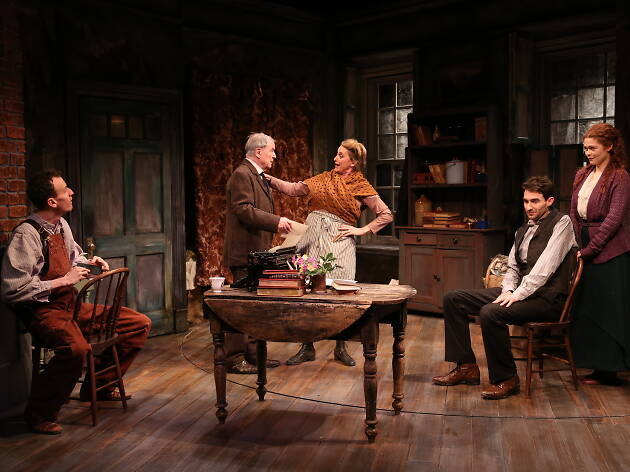 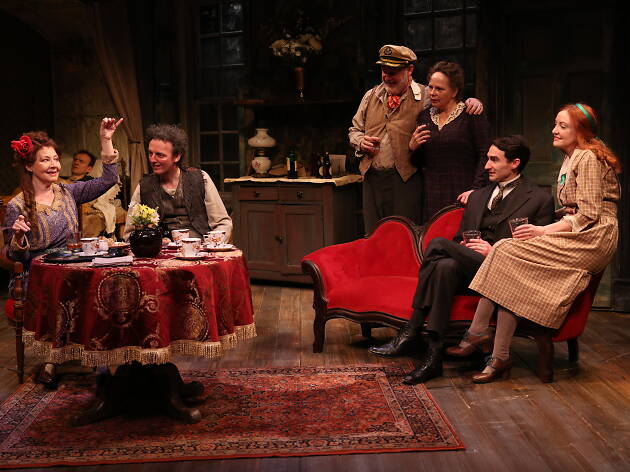 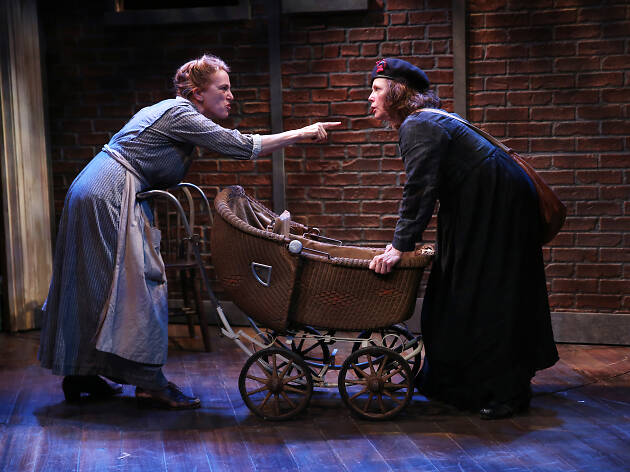 The Irish Rep takes a deep dive into the oeuvre of Irish master playwright Sean O'Casey, presenting a trio of the dramatist's best-known works. Ciarán O'Reilly directs The Shadow of a Gunman, set during Ireland's bloody War of Independance. Neil Pepe directs Juno and the Paycock, starring O'Reilly and Maryann Plunkett as an unhappy couple in a family torn by strife. Finally, Charlotte Moore helms The Plough and the Stars, an Easter Uprising tragedy. Each of the three plays is rolled out separately, then joins the others in a repertory schedule. See reviews of all three below.

The Plough and the Stars
Theater review by Helen Shaw

The Sean O’Casey season at Irish Rep comes to a booming close with the 1926 drama The Plough and the Stars, the third of O’Casey’s famous Dublin Trilogy, and the play that may have driven O’Casey out of Ireland. After writing a play set during the Irish War of Independence (The Shadow of a Gunman) and one during the Irish Civil War (Juno and the Paycock), the great Irish realist turned to the moment the fuse first caught light: the bloody Easter Rising of 1916. The Plough and Stars was another of his delicately balanced, long-burning plays, in which a group of believably regular people—self-deceivers and boasters and opportunists—get caught up in the sudden catastrophe of history. But this time, audiences rioted. The Easter Rising was considered the province of saints and heroes, and the Plough knocked them roughly off their plinths.

In late 1915, Jack Clitheroe (Adam Petherbridge) and his new wife, Nora (Clare O’Malley), have started to snap at each other over their tea. Jack’s paramilitary career with the Irish Citizen Army isn’t going anywhere—he’s too vain to serve under other men, and Nora wants desperately to keep him home—but the winds of Revolution are rising. Their tenement is already boiling with a war’s worth of little skirmishes: Jealous Mrs. Gogan (Úna Clancy) finishes conversations with ominous prophecies; the socialist Young Covey (James Russell) picks fights with bluff Fluther (company MVP Michael Mellamphy); the perpetually drunk Loyalist Bessie Burgess (Maryann Plunkett) scraps with her Catholic neighbors. In 1926, an audience would have sensed disaster at every hint, but a modern New York audience will find the first two acts mild and slow-building. Director Charlotte Moore does strong work with the customarily deft Irish Rep ensemble, but since we don’t hear O’Casey’s provocations as provocations anymore, for a long time the play seems nice. Nice and quiet.

Then we return from intermission. The final two acts of The Plough and Stars, in which Easter week 1916 detonates its long-laid charges, show the true mettle of the men and women we’ve come to know. The uprising has begun, and the terrified poor are hiding in their homes, cheering the ICA and popping out occasionally for a bit of looting. It is in this hour-long extended climax that the play and the production take hands and break into a dead run. Every actor musters ably to the cause, while Plunkett, always a powerhouse, gives the performance of a lifetime. Set designer Charlie Corcoran has dressed the entire Irish Rep space to seem like a Dublin street (there is laundry hanging up in the balcony), but he outdoes himself in the play’s fourth act, when, without sacrificing a hair of his scrupulous realism, Corcoran makes it clear that we’re looking at a version of a Crucifixion painting. In a tomb-dark room, men play cards like soldiers at the foot of the cross; a woman, dressed in a loose shift, weeps over her dead child; there are good thieves and bad thieves. So who in this bleak morality play does O’Casey think can play our bleeding savior? That’s a surprise I won’t ruin, but I will say: He thought we are all of us forsaken.

Juno and the Paycock
Theater review by Raven Snook

Sean O'Casey's Juno and the Paycock starts out as a domestic comedy before evolving into the stuff of Gaelic tragedy. Steely matriarch Juno (the marvelous Maryann Plunkett) is struggling to hold the Boyle clan together during the Irish Civil War of 1922. Her ne'er-do-well hubby, Captain Jack (a saucy Ciarán O’Reilly), would rather carouse with his pal Joxer (invaluable clown John Keating) than look for work. Their comely daughter, Mary (Sarah Street), is on strike and on the outs with her longtime beau Jerry (Harry Smith); their son, Johnny (a haunting Ed Malone), lost his arm and his equilibrium during the Irish War of Independence. At first, listening to their colorful squabbling feels like eavesdropping, as if we've just popped in for spiked tea and gossip. But when Captain Jack unexpectedly comes into an inheritance from a distant relative, that seeming boon becomes a ticking time bomb that rips the family apart.

Under the meticulously calibrated direction of Neil Pepe (Atlantic Theater Company’s longtime artistic director, moonlighting here at the Irish Rep), this production is a gem of Irish realism, expertly transitioning from humorous banter to life-altering epiphanies. No attempts are made to update the text or overlay it with contemporary content, because that would be unnecessary. The production’s evocative design and lived-in performances—O’Reilly and Keating played the same roles in the Irish Rep's 2013 revival of the play—bolster the verisimilitude. Charlie Corcoran's set includes laundry hanging from clotheslines, so you believe there's a whole community beyond the Boyles' water-damaged walls. The threat of the war, which rages in the streets below, hangs in the air as well: Every knock at the door echoes with foreboding.

Juno and the Paycock’s program includes a timeline of Ireland's political strife in the early 20th century as well as a glossary of Irish terms. But these lessons, though informative, are not strictly necessary. As the Boyles struggle to survive in a world where politics and religion aim to keep them down, their potent emotions are self-explanatory.

The Shadow of a Gunman
Theater review by Helen Shaw

When Sean O'Casey wrote his way into history with The Shadow of a Gunman, it was 1923, the Irish Civil War was still raging and the future of the just-established Irish Free State was still under its own deep shadow. O'Casey was a road laborer with no produced plays, and he hadn't yet written the other two plays in his Dublin Trilogy, Juno and the Paycock and The Plough and Stars, which would make him the North Star of Irish realism. No one yet knew that he had such a talent for turning merry character observation into modern tragedy. It must have felt like a bomb had gone off under the bed.

The first half of The Shadow of a Gunman is a tenement comedy that is almost sleepy. It is 1920, and apart from the grinding poverty everywhere and the Irish War of Independence raging outside, poet Donal (James Russell) has only two problems: his garrulous salesman roommate, Seumas (Michael Mellamphy), is too noisy; and the nationalist residents of the building have somehow come to believe that Donal is an IRA gunman on the run. Sweet neighbor Minnie (Meg Hennessy) certainly thinks he's from the 'Ra, and Donal is willing to play the part as long as it keeps her coming by to flirt. It's a short play, but O'Casey takes his time: There's a long scene when an old man from a front room just reads Donal a letter. Conversations loop and knot. The characters are poor, yet rich in the time to talk.

Still, the British paramilitary squads called the Black and Tans are everywhere. In a beautiful midnight scene, Donal stares up at the moon, trying to come up with the right metaphor. She's like a queen, he thinks, borrowing from Shelley—her face passing over Dublin as though she were reading it. The story she's reading, though, turns abruptly into horror. The play concludes in an extended spasm of violence. Donal has casually disdained his fellow tenement residents as fools, but now each person's foible reveals itself as a mortal danger; this man's empty boasting or that girl's hero worship will put each one at risk when the Tans burst in.

As a play, The Shadow of a Gunman is a bit schematic. That’s why it’s the least frequently produced of O'Casey's Dublin Cycle; you can see the plot's melodramatic turnings a mile down the road, so you take your excitement from O'Casey's rich character portraits. Luckily, director Ciarán O'Reilly presides over an embarrassment of riches from lead to bit player. (The old man with the letter is none other than Robert Langdon Lloyd, a past master who worked with Peter Brook and Paul Scofield.) First among the stellar cast would be Mellamphy, who sets up an incredible wall of sound—blather, asthmatic snuffling, stage business and pure fuss—only to reveal that Seumas may be more in touch with the Muse than Donal himself. And just next to him is John Keating, an Irish Repertory Theatre stalwart, who briefly plays a terrifying drunk. I've only ever known Keating as a gentle clown. Here he's a loaded gun.

Kicking off a four-month Sean O'Casey season, the Irish Rep treats this relatively minor work like royalty. Charlie Corcoran's impressive set wraps around the entirety of the Rep's mainstage, with laundry hanging from the balcony and a row-house facade built into the wall of the orchestra. There are two sound designers (Ryan Rumery and M. Florian Staab), two costume designers (Linda Fisher and David Toser), and a level of precision that only comes from deep perception and care. That's one of the lessons of the play, as it turns out. Donal, his mind on poetry, doesn't recognize the qualities of his neighbors because he barely glances up from his typewriter: He puts them in danger out of sheer inattention. This production could never be accused of that. It chooses to look carefully and closely—and noticing, the play argues, is itself a moral act.