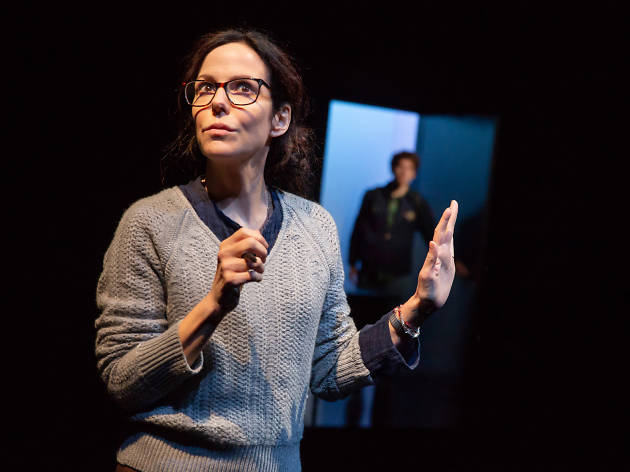 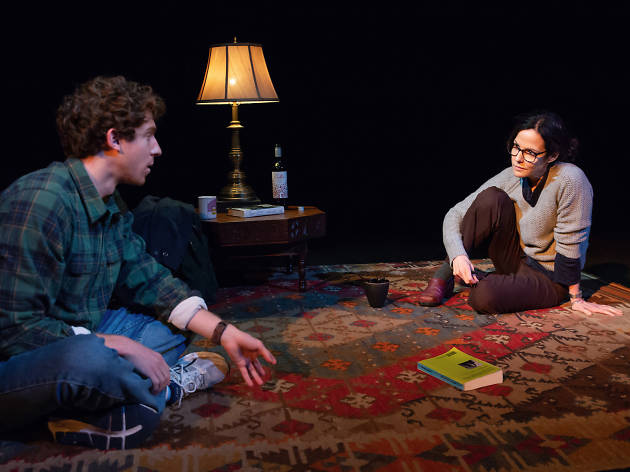 “It feels as if I’m made of yarn,” says Bella (Mary-Louise Parker) in Adam Rapp’s unabashedly literary The Sound Inside, and in a way, she is. A professor of creative writing at Yale—and the author of two short-story collections “and an underappreciated novel”—she narrates herself directly to the audience, spinning herself into a story, pausing sometimes to jot down one of her own turns of phrase on a notepad. And as she speaks, in director David Cromer’s ravishingly spare production, the world she describes is summoned to spectral life; when she mentions a snowy winter in New Haven, a denuded tree slowly fades into view on the black wall behind her. Unmarried and friendless, she lives for books, and probably not for very much longer: She has recently been diagnosed with stomach cancer (”somewhat advanced,” she brags wryly), which killed her mother at roughly her age.

Into this bleak picture intrudes, uninvited, a seemingly insufferable child: Christopher (Will Hochman, appropriately unsettling), a violently opinionated freshman who barges into her office, having refused to schedule an appointment with her on principle. (He rails, in audible all-caps, against “the encephalitic procedural gargoyles from the dean’s office.”) Unexpectedly, she finds him fascinating; both of them are weirdos. They discuss Dostoevsky, suicide and the novel he has been working on, which concerns a strange encounter between strangers on a train, one of whom is a young Yale writing student named Christopher. “You have yourself a nice amount of dread simmering,” she tells him. By this point, so does Rapp.

The Sound Inside is engrossing the way a good novel can be: It invites imaginative engagement, and it keeps you off balance with a steady stream of surprises as Bella’s and Christopher’s narratives—fictional and real—find an elegant equipoise. Alexander Woodward’s set and Heather Gilbert’s lighting reinforce the play’s generally gray and chilly mood, which lifts only briefly. (The stage warms up, for example, when Christopher praises Bella’s novel.) Yet The Sound Inside never feels grim: It has the inner glow of Parker’s charisma and intelligence—the spiked punch of her line readings, the lived-in quality of her oddness. Bella only seems to be unraveling: She and the play are in fact tightly knit, the better to ward off the cold.